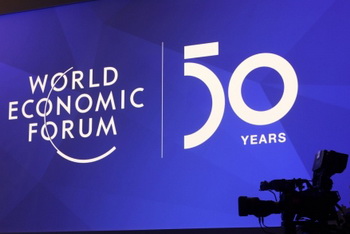 Ukraine in the Context of Global Problems of the World Economy

One of the main tasks of the “Borysfen Intel” Analytical Centre is to analyze, evaluate and highlight the key trends in the development of the geopolitical situation in the world that affect Ukraine’s national interests. Special attention is paid to major international events of the world level, where exactly such issues are discussed. One of such events is the annual World  Economic Forum (WEF) in Davos, which began in the 1970s.

As we have mentioned in previous publications, the peculiarity of such events since the second half of the 2010s has become the statement of the fact that several opposite tendencies in the development of the situation in the world have arisen, making it more complex and un-predictable. All this in one way or another affects the interests of the vast majority of subjects of international relations — from leading powers to those minor ones, who are on the periphery of world civilization.

Thus, new achievements of science and technology due to the “digital revolution”, as well as further deepening of the processes of the world globalization, create favorable conditions for the growth of international trade and the world economy. This, in turn, provides an opportunity to build a fairer and more secure system of international relations with equal rights for all countries and peoples. But the creation of new centers of power at the world or regional levels aggravates disagreements between them, including for influence in the world and for access to natural resources and markets. As a result, new lines of confrontation are emerging between different countries, isolationism and protectionism are spreading in their economic relations, social inequality is increasing, and there are new conflicts, acts of terrorism and waves of forced migration arising. And as additional problematic factor, there are global climate changes that provoke environmental disasters worldwide.

For the first time, such trends were clearly identified and described at the World Economic Forums in Davos in 2018 and 2019, under the slogans of “Creating a Shared Future in a Fractured World” and “Globalization 4.0: Shaping a Global Architecture in the Age of the Fourth Industrial Revolution”. At the same time, many fundamental approaches were proposed to overcome such problems, among which were the following:

However, for the most part, these recommendations remained, so to speak, at the level of declarations and were not implemented. As before, most countries professed their own interests, not global values. This is evidenced by the USA’s trade wars against China and Europe, the spread of Eurosceptic and nationalist sentiments in EU countries, as well as the aggressive external expansion of Russia, during which the sovereignty of its neighboring countries is violated.

In these circumstances, discussion of global problems of the world level and ways to resolve them continued at the World Economic Forum in Davos in January 2020 (themed: “Stakeholders for a Cohesive and Sustainable World”), attended by about 3,000 representatives from 117 countries, including 53 heads of state and government. In particular, the forum was attended by D. Trump, President of the United States of America; A. Merkel, Federal Chancellor of Germany; S. Kurz, Federal Chancellor of Austria; G. Conte, Prime Minister of Italy; M. Rutte, Prime Minister of the Netherlands; P. Sanchez, Prime Minister of Spain. Leaders from influential international organizations included: A. Guterres, the UN Secretary General; K. Georgieva, Managing Director of the International Monetary Fund; R. Azevêdo, Director General of the World Trade Organization (WTO); J. Stoltenberg, Secretary General of the North Atlantic Treaty Organization (NATO); U. von der Leyen, President of the European Commission. It is also worth pointing out the participation in such a forum of the Ukrainian delegation led by the President of the country V. Zelenskyi.

In the final report of the organizers of the Forum and the speeches of its participants, the main threat to the world economy for the next ten years was called the danger of a new Great Depression, similar to the 1929’s crisis. Thus, in view of the analysis of the development of the situation in the world, the International Monetary Fund has lowered the forecasts of growth of the world economy for the next three years. According to experts from the IMF, WEF and other leading financial and economic institutions, the reasons are as follows:

These threats to the world economy are similar to those discussed at previous World Economic Forums in Davos. However, they have a number of differences. Against this background, the recommendations of WEF experts to address global economic problems facing humanity are changing accordingly.

For one, this year’s Forum suggested the concept of building moderate capitalism or “stakeholder capitalism”. The idea of the authors of this model is to reach a harmony among the leading participants in the world economic activity on directing a part of their income and resources to overcome the above-mentioned problems in close interaction with governments and the public. And it is stated that to stop the degradation of the environment and to revive it is possible only when humanity reconsiders its attitude to nature. According to WEF experts, a major role in this matter should be played by big business which should reduce the use of hydrocarbons in production activity and increase its efficiency.

Importance is attached to the financial sector, which is capable of making a significant contribution to addressing global inequalities through certain mechanisms, including by expanding the range of financial services in the economy, first of all by improving access to bank credits.

All these issues are relevant for Ukraine as well, since today it is fully integrated into the world economy. For example, our country is subject to interests of the leading economies of the world, first of all — the EU, Russia and China. At this, the consequences of the recent disagreements between them are rather ambiguous for Ukraine. On the one hand, Ukraine has more opportunities to enter the markets of Europe and China, but on the other, it is experiencing economic pressure from the Russian Federation and is falling into, so to speak, sphere of Chinese expansion.

The development of the Ukrainian economy is adversely affected also by internal problems of Ukraine, including the confrontation between different political forces, high degree of socio-economic inequality in the Ukrainian society, corruption and bureaucracy, as well as the conflict in the Donbas. All this results in the decrease in investment in Ukraine, outflow of capital and able-bodied population, including high-level professionals. Besides, populist sentiments are spreading among the population of Ukraine, and some politicians and oligarchs hurry to use this for their own purposes.

Global climate change is also felt in Ukraine. In particular, the shifting of climate zones as a result of global warming is detrimental to agriculture in the southern regions of Ukraine. The armed conflict in the Donbas creates a threat of environmental catastrophe in the East of Ukraine, which is a consequence of disruption of the normal operation of mines and other dangerous industrial sites. Significant environmental problems also began to appear in Crimea after it was annexed by Russia. An example is the release of chemicals at the Crimean Titan plant in the city of Armyansk in August 2018.

In such circumstances, resolving of global problems in the world, and choosing optimal strategy for our country’s state development are vitally important for Ukraine. In this connection, indicative was President of Ukraine V. Zelenskyi’s Special Address at the Davos Forum. In his speech, he said that, based on the interests of Ukraine, it is extremely important:

Of course, the initiatives of the President of Ukraine cannot be implemented in the near future, due to the ambition of the proposals, the complexity of the issues raised and their ambiguous perception in the world. At the same time, they clearly demonstrated Ukraine’s strategic goals and the firmness of the Ukrainian authorities’ intentions to implement these plans. Moreover, they were made public at such a high-level international event as the Davos Forum. This enabled Ukraine not only to declare the prospects of its development to the leaders of the leading states, heads of international organizations and representatives of big business, but also to discuss them with them.

For example, on the sidelines of the WEF, President of Ukraine V. Zelenskyi had meetings with K. Georgieva, Managing Director of the International Monetary Fund; President of the European Bank for Reconstruction and Development S. Chakrabarti; S. Sommaruga, President of the Swiss Confederation; M. Rutte, Prime Minister of the Netherlands; Chairman of the Board and CEO of Cargill Inc. D. MacLennan; SOCAR CEO R. Abdullayev.

At the same time, the World Economic Forum in Davos reiterated that significant differences remain between the world’s leading powers. Thus, because of disagreements with the USA, the leaders of China and Russia refused to participate in the event. President of France E. Macron ignored the Forum again.

In fact, the same position was taken by US President D. Trump, who used the Forum to confirm his isolationist policy. In particular, he said, that every country must first take care of itself and develop its capabilities. At the same time, D. Trump justified Washington’s actions to impose restrictions on trade with the PRC, and spoke in favor of building up production, despite the environmental implications he refuses to acknowledge.

Federal Chancellor of Germany A. Merkel voiced absolutely different views, speaking in favor of the joint actions of the countries, and considering global climate change as one of the greatest threats to humanity. This showed that harmony cannot be achieved in the modern world, which, in turn, does not allow to effectively resolve global problems of the world economy.

Therefore, Ukraine should rely first of all on its own capabilities to achieve its goals. Commenting on the current problems of our country, the President of Ukraine, at the Davos Forum, pointed out that Ukraine just got a running head start for further growing and improving.