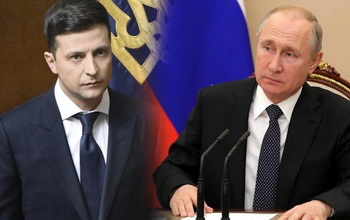 What Russia Is Preparing for Us…

In my previous article, “Battlefield. Syria and the New Cold War”, I touched upon the renewed confrontation between Russia and the West actually at the level of the second half of the 20th century. It is known that the center of such confrontation was Ukraine, which found itself at the crossroads of their interests. This fact was confirmed during this year’s 56th Munich Security Conference in February 2020. Thus, in the Munich Security Report 2020, Russia was called the main force that throws down challenges to the West. These include Moscow’s ongoing efforts to discredit and damage Western liberal institutions and values, political point-scoring with Western countries and international organizations, and persistent destabilization of Ukraine.

Today, this has already led to the destruction of the entire system of international relations that arose after the collapse of the USSR and the end of the past Cold War. The statement of such changes became the main result of the last year’s Munich Conference. By the way, Moscow’s switching to confrontation with the West was announced by V. Putin (at the time he held the post of Prime Minister) at the 2007’s Munich Conference.

Of course, this situation actually excludes the possibility of resuming normal relations between the West and Russia, and therefore the lifting of the US and EU sanctions. In turn, this will continue to undermine the Russian economy and create increasing problems for the Putin regime. As pointed out in Munich, — Russia’s economic resources are running low and the political situation in the country is deteriorating.

According to the organizers of the Conference, Russia scored several diplomatic wins in 2019 (namely: Russia’s readmission into the Council of Europe, enhancing its role as a power broker in the Middle East, and French President E. Macron’s calling to rethink the fundamentals of the EU-Russian relations) are solely a result of the West’s passivity, not an increase in Russian power. Proceeding from here, it is concluded that “Moscow has long been punching well above its weight”. “The hat does not fit Senka”, as it sounds in the Russian version, meaning “It is above Moscow’s pay grade”.

Western sanctions’ negative affect on Russian economy have also been repeatedly analysed on our website. Therefore, we will not dwell on them again. Moreover, former Prime Minister of the Russian Federation D. Medvedev acknowledged these problems immediately after his resignation in January 2020. But then, all this is no longer a secret, no matter how hard the Kremlin tries to hide the real situation in the country.

And what has Russia to do now? Of course, as the entire civilized world recommends, — to change its policy and move from confrontation to building normal constructive relations with other countries, including the United States, the EU and Ukraine, as well as with other former Soviet republics. However, this path of resolving problems in no way suits Moscow with its imperial ambitions. Therefore, it keeps acting differently, namely, trying to restore the semblance of the late USSR, with Russia at its head, and to take its geopolitical place in the world. Moscow’s methods of action to implement its plans remain unchanged. At this stage, they include the achievement of two major goals that are of fundamental importance to the Kremlin.

The first is establishment of control over Ukraine, without which restoration of any semblance of the USSR is simply impossible.

The second is re-division of the world into spheres of influence, as was done by the leaders of the Soviet Union, the United States and Great Britain at the Yalta Conference in February 1945.

However, unexpectedly for Moscow, all its hopes are still in vain. Thus, the new government of Ukraine has taken a firm stance on defending our country’s national interests, which was demonstrated during the December 2019 summit of the “Normandy” group. It is known that the President of Ukraine clearly defined the possibility of holding elections in certain regions of Donetsk and Luhansk regions (ORDLO) only if Russian troops were withdrawn from those territories. And also — regaining to Ukraine the control of its eastern border.

By the way, it has also crushed the foundations of Moscow’s ideology, which it uses to justify its policy towards Ukraine. Contrary to the Kremlin’s assertions, Ukraine’s policy is determined not by “Ukrainian nationalists”, who allegedly seized power in the country, but by the national interests of our country. This is precisely what has shown the invariance of the main directions of Ukraine’s foreign and domestic policy under its new power, which in no way can be called as “Ukrainian nationalists” in their Russian vision.

Similarly, neither the USA nor the leading EU countries are in any way going to make fundamental concessions to Moscow, including over the issue of re-distribution of spheres of influence in the world and returning Ukraine under the control of the Russian Federation. Thus, despite all the US and EU declarations of desire to improve relations with Russia, they have continued, and even built up, sanctions against Russia. In particular, in February 2020 the United States imposed additional sanctions on Russia’s defense sector for Moscow’s violating non-proliferation regime.

Contrary to French President E. Macron’s actual capitulation to Russia, the same position is taken by the leadership of the European Union. According to the statement by European Commissioner for Enlargement and European Neighbourhood Policy, O. Varhelyi, the European Union will not review sanctions against Russia without the Minsk’s progress.

However, Moscow does not give up its efforts to achieve its goals and continues to make every effort to do so. First of all, this concerns the imposition of the Russian version of implementation of the Minsk Arrangements on the basis of the so-called Steinmeier’s formula. According to Russia’s plan, this approach envisages recognition of the “DPR” and “LPR” by Ukraine, as well as granting consent for the election in the ORDLO without any obligations on the part of Moscow to fulfill the demands of our state.

But then, all this is trivial and does not carry anything new. For all six years of Russia’s armed aggression against Ukraine, it has never been able to adequately explain and justify its actions. Therefore, during the session of the UN Security Council, it will again say that Ukraine does not fulfill either the Minsk Agreements or the decision of the “Normandy” group in December 2019, including our refusal to recognize the “special statuses” of the “DPR” and “LPR”, to hold an election in the ORDLO without any preconditions and to withdraw its troops from the front line.

All this will be interpreted by Russia as Ukraine’s conscious unwillingness to resolve the Donbas conflict, which is one of the greatest threats to Europe’s security. At the same time, Moscow, as always, won’t mention who provoked the conflict in the East of Ukraine and who continues to keep the situation in the region permanently tense. Not to mention the circumstances under which both the first and second Minsk Agreements were concluded.

For those who do not remember, let me remind you again. The first version of the document was signed in September 2014 after the invasion of Russian troops into Ukraine and fighting near the city of Ilovaysk. And the second — in February 2015 during the Russian troops’ attack on the city of Debaltseve. Just when a meeting of leaders of the “Normandy” group was taking place in Minsk, which in no way stopped Russia. It is from that time that Russian troops remain in the occupied territories of Ukraine, which is the main obstacle in the settlement of the conflict in the Donbas.

Unfortunately, many do not understand or do not want to understand Russia’s real role in the situation in the East of Ukraine. This is exactly what Moscow is counting on seeking international support for its policy toward Ukraine. In particular, in this regard, Russia is relying on China as a member of the UN Security Council and its partner in the confrontation with the United States, which, in turn, is Ukraine’s mainstay in its confrontation with Russia.

According to some analysts, during the UN Security Council’s Russia-initiated meeting on Ukraine, China can support Russia’s stance on our country. Moreover, Russia has already attracted a number of supporters, including among the participants of the Munich Conference. As in 2007, this international platform was again used by Moscow to demonstrate its neo-imperial ambitions.

Thus, during the Conference Russia proposed a plan to resolve the situation around Ukraine, which actually provides for:

And how can this be perceived if not as a disregard for Ukraine and the whole civilized world. And how can be explained the participation in this farce of some organizers of the Munich Conference, representatives of international organizations and, most surprisingly, some Ukrainian politicians? Or, more precisely, people who consider themselves to be such.

As expected, the proposals were not widely supported by the Conference participants and were criticized, in particular, by the United States. This, in turn, reaffirmed both the continuation of the confrontation between the USA and Russia and the firmness of Washington’s position in support of Ukraine.

Contrary to Moscow’s insinuations, the real state of affairs in the Donbas and Ukraine’s views on ways to end the armed confrontation in the region were outlined by Ukrainian President V. Zelenskyi. For example, he pointed the extremely difficult situation in the East of Ukraine and Russia’s unwillingness to end the conflict.

Given this, V. Zelenskyi expressed Ukraine’s desire for peace, but only on its own terms. At the same time, he confirmed the possibility of holding elections in the Donbas in the autumn of 2020, but again solely on the basis of Ukrainian legislation. It is clear that such an opportunity can only be secured if Russia withdraws its troops from the occupied territories of Ukraine. This is the main content of Ukraine’s approach to resolving the problem of stabilizing the situation in the Donbas, which it defends at all levels, including in the UN Security Council. By the way, Ukraine intends to reiterate these issues at the UN General Assembly Plenary meeting on February 20, 2020, which would be an adequate response to Moscow.

But, in any way, the UN is just an international organization that is unable to really influence Russia and force it to stop aggression against Ukraine. The only effective guarantee of our country’s security is our Armed Forces. As V. Zelenskyi said at the Munich Conference, “Ukraine has one of the strongest armies in Europe, numbering 200,000 (professional servicemen)”.

The main point is not to believe V. Putin, including his “eyes”, which allegedly testify to “the desire of the President of Russia to end the conflict with Ukraine”. Neither V. Putin nor anyone from the Kremlin’s top officials will voluntarily leave Ukraine alone, no matter how much we would like them to.