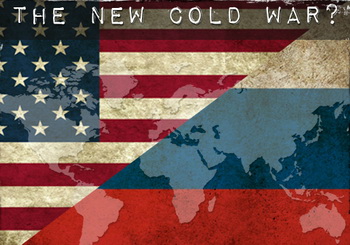 Syria and the New Cold War

The main geopolitical consequence of the Putin regime’s armed aggression against Ukraine is the renewed rivalry between Russia and the West at virtually the level of a new Cold War. Like the Cold War of the second half of the 20th century, it continues at different levels — global, regional and local, and in different spheres — political, economic, military, special, information, etc.

In contrast to the times of the late USSR, in the economic sphere, the USA and the EU have an absolute superiority over the present-day Russia in terms of their potential. For example, their total gross domestic product is almost twenty times larger than Russia’s. Therefore, Moscow’s main efforts in the confrontation with the West are focused on other spheres, first of all, military, special and informational ones.

We have repeatedly raised this issue, but in light of the changes taking place in the world, let us touch upon it once again. Especially as it is directly related to the national interests and security of Ukraine, which remains at the intersection of the interests of the West and Russia. Despite some softening of the USA and EU’s attitudes to the Putin regime and the parties’ recent attempts to reach compromises, the issue raised remains relevant.

For example, in the conceptual documents of the USA/NATO and Russia in the security sphere, the parties continue to perceive each other as the main adversary. Measures of mutual restraint and pressure are being taken. This is confirmed in the report of the organizers of this year’s 56th Munich Security Conference (held in February each year). The authors of the Munich Security Report 2020 consider Russia (which is called “Putemkin’s State”) one of the main powers that have challenged the world.

All this gives rise to the expectation of further intensification of the confrontation between the USA/NATO and Russia in the military sphere. At this, as before, both sides will continue to rely on their strategic nuclear missile forces. In particular, during the expanded meeting of the Defense Ministry’s Board held late last year, V. Putin gave priority to the development of the latest weapons in Russia’s “nuclear triad.” On the eve of the Munich Conference, D. Trump expressed his intention to create in the USA the most powerful nuclear-missile forces capable of resisting Russia and China.

At the same time, since 2015–2016, Russia and the United States/NATO have been conducting large-scale operational and combat trainings of their armed forces. Such measures more and more look like those of the Cold War period, when different options for hostilities or armed conflicts between the Russian Federation and the West, including the use of nuclear weapons, are rehearsed.

According to a series of operational and combat trainings of the Russian Armed Forces, a strategic command and post exercise (SCPE) “Caucasus-2020” is planned to be held this year in the Southern Military District of the RF Armed Forces. Under the scenario, the tasks of strategic offensive and defense operations on the South-Western (Black Sea) direction will be rehearsed. Similar tasks on the North-Western direction will be practiced during the “West-2021” SCPE, which is scheduled for the next year in the Western Military District of the RF Armed Forces. Besides, since 2018, there have been separate SCPEs of Russia’s Strategic Nuclear Forces “Grom”.

In their turn, the USA and NATO, have resumed REFORGER exercise (Return of Forces to Germany; conducted annually from 1969 to 1993), which provided for the improvement of the movement of US troops to Europe and repulsion of the USSR’s aggression. Since 2014, under a similar scenario, the USA and NATO have been conducting the Atlantic Resolve exercise. In the spring of 2020, under this scenario are planned to be conducted Defender-Europe 20, which will be the largest for the last 25 years.

As in the past Cold War, the global confrontation between Russia and the West will be accompanied by direct or indirect military clashes between the parties in local war zones and armed conflicts. In the context of such clashes, attempts are being made to improve their positions in certain regions of the world and to weaken the positions of their opponents, to test or to develop new forms of warfare.

In the second half of the 20th century, such clashes between the United States and the former Soviet Union took place in the Korean Peninsula, Vietnam, Cuba and the Middle East and, in fact, in Afghanistan. During such conflicts, the USA and the USSR alternately had the winning hand. In particular, the Soviet Union, with the help of China, won a victory over the United States in the Korean Peninsula and Vietnam. At the same time, the United States overmastered the USSR in the Arab-Israeli wars and in Afghanistan. In the end, it was the protracted nature of the Afghan conflict that became the catalyst for the collapse of the USSR.

In recent years, in the context of the new Cold War, now between Russia and the USA/NATO, direct or indirect clashes between them in the military sphere have been happening again in the Middle East. Russia has covertly backed anti-US forces in Iraq and Afghanistan and has openly opposed the United States in Syria. In doing so, the Russians are working closely with Iran, their main partner in the region.

Thus, Moscow purposefully supplies Iran with various types of weapons, missile systems (air defense included). According to some estimates, Russian weapons are also supplied to Islamic extremist groups in the Middle East. It was this that enabled Tehran to adequately respond to D. Trump after he had switched to a tough anti-Iran policy, including the US withdrawing from a “nuclear deal” with Iran and increasing its political and economic pressure. Tehran’s response was in the form of attacks on US troops and other objects in Afghanistan and Iraq. Among them, the most resonant was the massive rocket firing by the Islamic Revolutionary Guards Corps (IRGC) of US military bases in Iraq on January 8, 2020, to which, in fact, Washington did not respond. In addition, the Islamic Hamas movement (supported by Iran) has intensified its actions against Israel, as a major US ally in the Middle East.

At the same time, Syria is considered to be the main hotspot on the periphery of the US-Russian relations. They both have there their own, conflicting interests. Their military operations have different and, as a rule, opposite aims. However, despite formal arrangements to coordinate their actions on Syrian territory, there is an increase in incidents between US and Russian troops, including armed clashes, during which people are killed.

The reason for this is first of all Russia’s support for the Assad regime in Syria, while the United States is against it. For example, Russian troops, along with Syrian government forces, are fighting B. Assad’s opponents (the moderate opposition included), calling it a “fight against Islamic terrorists”. For its part, the United States’ troops are providing military assistance to the Syrian opposition, also under the pretext of “countering extremists”. During combat actions, both, Russia and the United States inflict fire on the positions and locations of their opponents, which creates a risk of mutual killing of Russian and US military.

Besides, a separate sphere of the confrontation between Russia and the USA in Syria is the struggle for control over local oil and gas fields. Today, the United States controls one such area in the Euphrates River Valley, blocking Russia’s efforts to get to it. For example, in February 2018, the US Armed Forces struck a unit of the Russian private military company (PMC) Wagner, which was trying to break through. As a result, several dozens of Russian mercenaries were killed.

Systematic incidents between the US and Russian military are also reported near the US military base in the Syrian city of al-Hasakah (the administrative center of the same-name north-eastern Syrian province). So far, such incidents have not turned into hot armed clashes, but this can happen any time now. Especially, as in the area there are the above-mentioned Russian mercenaries from the Wagner PMC.

Active fighting in the Syrian province of Idlib between the Armed Forces of Turkey, as the USA’s NATO ally, and B. Assad’s troops, as an ally of Russia, also adds to the tension in Russian-US relations in Syria. This has already complicated relations between Turkey and Russia, which may become critical if Moscow gets involved in the Turkish-Syrian confrontation. The reality of such a threat is demonstrated by the precedents, such as the destruction of the Russian bomber Su-24M by Turkish aircraft in November 2015, as well as the shelling by Turkish troops of the Russian positions near Tal-Rifaat in January 2020.

A similar problem is caused by the military actions of another US ally in the Middle East — Israel against the Iranian forces and the Hamas movement in Syria. Currently, they are limited only to Israeli air strikes, but have already caused an incident involving the crash of a Russian Il-20 reconnaissance aircraft, which accidentally was downed by Syrian air defense in September 2018.

All of this could turn into larger military incidents in Syria between the US/Turkey on the one hand and Russia/Iran on the other. These could include clashes between units of their armed forces, shelling of military bases and other objects, mistaken or even deliberate fire on aircrafts, helicopters or warships.

Given the overall increased strategic confrontation between Russia and the USA/NATO, such incidents could escalate into greater military confrontation between the parties, including at the European theatre. Today, Western experts are already reporting this. In particular, according to the Financial Times, “Europe could feel the fallout from Idlib” from the new carnage in Syria, organized by Russia.

Such threats are of direct concern to Ukraine, which remains, as we have pointed out, at the intersection of Russia and the West’s interests. In view of this, it will inevitably be drawn into the armed conflict between Russia and the USA/NATO, even if this conflict has nothing to do with it. And even more so, it is already happening. As evidenced by the fact that the passenger aircraft of the International Airlines of Ukraine was shot down by the air defense of Iran on January 8, 2008 in Tehran, just after the IRGC launched a missile attack on US military bases in Iraq. At this, the SAM, which shot down the Ukrainian aircraft, was of Russian production…