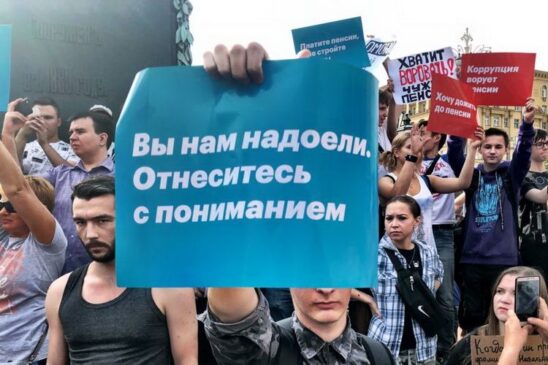 Earlier, we already considered the possibility of a political crisis in Russia, when the Russian mass media began to write about the catastrophic consequences of the war against Ukraine for the Russian Federation itself. Currently, this situation is changing qualitatively. The crisis processes in Russia are already moving from the informational sphere to the practical plane and create a real prospect of an aggravation of the internal conflict in the country. Therefore, Russia is not just losing the ability to continue the war against Ukraine, but is also really approaching disintegration. And that will be the logical conclusion of the existence of the Russian Empire in all its forms.

A correct understanding of what is currently happening in Russia requires some retrospective view of the events that preceded the war against Ukraine and became the impetus for the Kremlin’s decision to start it.

To begin with, according to the generally accepted opinion, the main reason for Russia’s full-scale attack on Ukraine was personal ambitions of V. Putin, who is trying “to restore” the Soviet Union or the Russian Empire. This is true. At the same time, there are a number of other reasons for Moscow’s aggression, which are no less important.

First of all, among them, it is important to note the drop in the ratings of the Russian government and V. Putin personally, which was a consequence of the complication of the socio-economic situation in Russia as a result of the COVID-19 pandemic. Already in 2021, V. Putin’s rating had fallen to the lowest level since his time in power — to about 30 %.

At the same time, the struggle for influence and access to finances and resources intensified the contradictions between various political and economic groups in the ruling elite of the Russian Federation. A number of difficulties also arose in the relations between the federal center of Russia and its regions. An example of this was the well-known conflict between the central and local authorities in the city of Khabarovsk.

Taken together, the above-mentioned circumstances began to pose a threat to V. Putin’s power, which required an appropriate response. This is what prompted Moscow to attack Ukraine, in line with the usual Russian tradition of resolving internal problems through external aggression. In this way, the leadership of the Russian Federation tried to raise its authority among the country’s population and consolidate society with the help of the ideas of reviving the USSR and expanding the territory of the Russian Federation, “defending compatriots abroad”, as well as intensifying the confrontation with the USA and NATO.

At the first stage of the war, the Kremlin’s hopes were fully justified. For example, the majority of the population of Russia supported the war against Ukraine and fell into euphoria in anticipation of a “quick victory”. Especially since Moscow propaganda completely distorted the results of hostilities in favor of Russia. Socio-economic problems began to be perceived by Russians as temporary difficulties associated with the war. At this, V. Putin’s rating increased significantly, which is what he was counting on.

However, the prolongation of the war, huge military losses, deterioration of the country’s economy and the quality of life of the population due to Western sanctions, as well as the actual spread of the combat zone to the Russian regions bordering Ukraine, began to change the situation and exacerbate “pre-war” problems at all levels: from the highest authorities of the Russian power to ordinary people.

As it should be expected, the sanctions blow on the Russian economy led to another increase in contradictions in the ruling elite of the country. Besides, due to different attitudes to the continuation of the war against Ukraine, some oligarchs, who suffered the greatest losses due to Western sanctions, began to put pressure on the Russian authorities over this issue. We already wrote about this in the article “Political Crisis in Russia? A Look Through the Russian Media”. In particular, it was about how openly anti-Putin views are spread through some influential Russian mass media controlled by the Secretary of the Security Council of the Russian Federation and former director of the Federal Security Service (FSB) N. Patrushev.

At the moment, it has come to direct actions of the FSB against some organizations that were created under the auspices of V. Putin and work in his interests. For example, in late June 2022, the FSB of the Russian Federation detained the leadership and members of the Volgograd branch of the so-called “Committee for the Security of Russia” (“KOBRa”), who were allegedly planning an armed seizure of power in the region. According to the FSB explanation, they created an extremist organization that was developing plans to overthrow the regional government with the use of firearms. In addition, attacks on representatives of law enforcement agencies and the armed forces of the Russian Federation, as well as infrastructure facilities, were being prepared.

This fact in itself is indicative. The “KOBRa” organization is officially registered in the Unified State Register of Legal Entities of the Russian Federation. Its full name is “All-Russia Union of Non-Governmental Organizations “Public Committee for Supporting Russia’s Security”. The goal of the organization’s activities is to promote “the preservation of the integrity and strengthening of the Russian state, ensuring the safety of Russian citizens’ living in the country and abroad, as well as the creation of a civil society focused on social justice”.

In fact, the above-mentioned organization was created under the auspices of V. Putin as an alternative body to combat corruption in Russian government (at the highest level included), as well as to fight against democratic movements. Besides, it’s responsible for V. Putin’s and the ruling United Russia party’s election campaigns.

According to the reports of some media, immediately after this an attempt on N. Patrushev’s life was made — an unsuccessful attempt to poison him, to be exact. We would not like to draw premature conclusions, but the given circumstances obviously confirm the fact of confrontation between certain groups in the leadership of the Russian Federation, which are concentrated around V. Putin and N. Patrushev.

At this, V. Putin, most likely, relies on the leadership of the Russian Ministry of Defense and Rosgvardia personally devoted to him, while N. Patrushev, as its former chief, relies on the FSB. Quite revealing are V. Putin’s accusations against the FSB for the failures of “special operation” in Ukraine, including the provision of incorrect intelligence about the situation in our country and the waste of funds allocated for subversive work against Ukraine. As is known, after this the task of intelligence support for the war against Ukraine was transferred from the FSB to the General (Intelligence) Directorate of the General Stuff of the RF Armed Forces, which worsened relations between the two special services.

But then, even without this, Russia’s security services faced critical problems that primarily affected the Russian Armed Forces. In fact, the processes of the destruction of the Russian army began, which was a consequence of the catastrophic losses suffered in Ukraine, the lack of real success on the battlefield, the creation of various national formations in the Russian Armed Forces, as well as the forced mobilization of residents of the occupied territories of Ukraine who do not show any desire to fight.

In practice, units and troops of the Armed Forces of the Russian Federation on the territory of Ukraine are still subordinate to the central command and try to somehow fulfill the tasks set. Even when they are openly thrown “to the slaughter” in fruitless attacks on the positions of the Defense Forces of Ukraine, in the Donbas included.

However, there is also the “reverse side of the coin”, namely combat stress, which is traditionally “compensated” by Russian military at the expense of drunkenness, looting and violence. Such processes are the most terrible threat for any army. It is from this that its destruction begins, no matter how strong it looks.

However, one can crush the adversary with the mass of manpower, despite any sacrifices, even under these circumstances. Such strategy and tactics have historically been used by Moscow since its existence as a vassal of the Mongol Golden Horde. But Russia currently does not have the necessary mass of troops: losses at the front, mass refusals of the Russian military to participate in the “special operation”, desertions and voluntary surrenders. Indeed, who wants to die for the crazy ideas of Kremlin maniacs led by Putin?

In addition, more threatening processes are unfolding in the Armed Forces of the Russian Federation. Interethnic relations have always been a problem for Russia, which primarily concerns its army. Previously, similar problems were somehow smoothed out with the help of an even distribution of people of different nationalities among the units of the Russian Armed Forces. Although even then the natives of the Caucasus, primarily the Chechens, oppressed the Russians. And the modern Russian army has already overtaken the former Soviet army in terms of non-statutory relations.

The creation of national battalions within the Armed Forces of the Russian Federation, in conditions of mutual hatred of the nations and peoples of the Russian Federation for each other, brought the mentioned problem to a qualitatively new level. The facts of armed clashes between such national units have already been recorded. In particular, this concerns the natives of the central-western regions of Russia and the North Caucasus, who were and remain sworn enemies, as evidenced by past and present history. Therefore, the processes of inevitable destruction await the Russian Armed Forces, as it happened to the Soviet army after its defeat in Afghanistan.

Note that the majority of the Russian society still supports Putin’s war against Ukraine. However, the whole of “hoorah-patriotism” comes to nothing when faced with the real prospects of being drafted into the army and sent to war. Thus, in all Russian regions, plans for the spring conscription for military service were completely disrupted. As reported by local military commissariats, no more than 10–20 % of the planned number of people were sent to the army. The rest of the conscripts “disappeared from their places of permanent residence”. In fact, only residents of depressed regions of Russia who cannot find other sources of income for their own survival voluntarily go to the army.

Let’s add a few words about the situation in the regions of Russia adjacent to Ukraine, where the combat zone is gradually spreading. First of all, this concerns Belgorod region, which performs the functions of the operational rear of the Russian troops on the Kharkiv section of the front. Everything is clear there. The front line is nearby, so artillery shells somehow fired into relatively peaceful areas of the enemy as well. Although, how peaceful are they, when the positions of Russian operational-tactical missiles “Iskander” are located to the north of the city of Belgorod, which carry out systematic shelling of Kharkiv and Kharkiv region?

The same is happening in the border areas of Bryansk and Kursk regions of Russia. Officially, there is no front line there, as Russian troops fled from the north of Ukraine in April 2022. But, in fact, shelling of the border zone takes place there every day. Moreover, in many cases, their own border villages are destroyed by Russian artillery fire, which is already written about in local social networks.

This leads to the spread of anti-war sentiments in Russia, whose population is already tired of both Putin himself and his war. Moscow once again failed to defeat Ukraine. This is not yet a defeat for Russia, but it is getting closer.