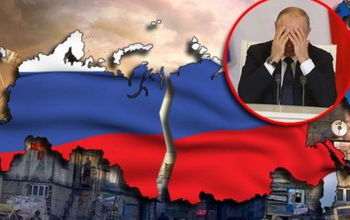 Analysis of the course of Russia’s war against Ukraine confirms its actual transition to a protracted positional phase with active fighting only on certain sections of the front. In turn, this creates critical problems for Moscow, which is in fact at a dead end. Thus, increasing the combat strength of Ukraine’s Defense Forces, including the acquisition of heavy weapons, allows them to deter Russian troops, and in some cases go on the offensive. Under such conditions, Russia is forced to attract additional resources for the war against Ukraine, wasting time, which exacerbates the negative effects of sanctions on the Russian economy. Such tendencies are deepening the rift in Russia’s ruling elite between those who support the continuation of the war against Ukraine and those who are in favor of ending it sooner. Besides, tensions are rising in the Russian society and among servicemen involved in the war against Ukraine. All this is increasingly covered by the Russian media.

We have already touched upon this topic in previous publications. However, the considered processes are being further developed, which requires clarification of the estimates made. First of all, this concerns the appearance in the central media of Russia of openly critical comments on the Kremlin’s policy, which personally mention Vladimir Putin and Dmitry Medvedev. In addition, the negative effects of Western sanctions on the Russian economy are recognized. They also point out Russia’s being unable to stop Ukraine’s counteroffensive, let alone to win over Ukraine without general mobilization and the transition of Russia’s defense industry to wartime production.

Russia’s local media have so far refrained from criticizing the central government’s policy and keep showing some loyalty to it. At the same time, the number of reports on the economic problems of the regions and the decline in living standards of their population is increasing. Despite the strict censorship and a ban on disclosing information about the losses of Russian troops, articles began to appear about escalating tensions in the military environment, and the publication of obituaries of Russian servicemen killed in Ukraine has resumed.

Despite the Russian FSB’s full control of the Russian information space, the media that publish articles of this content are not actually persecuted. Moreover, as we have written before, critical and negative assessments of these issues are spread by the media, which are under the “roof” of the Russian secret services.

First of all, we should mention Nezavisimaya Gazeta, connected with the Secretary of the Security Council of the Russian Federation and former director of the FSB N. Patrushev. Given that he is considered Putin’s most likely successor as President of the Russian Federation, Nezavisimaya Gazeta’s publication of articles that contradict the Kremlin’s official policy is highly illustrative. Especially when their authors are famous and respected people, or the editor’s office of the newspaper.

Given the situation in Russia in the context of its war against Ukraine and the critical aggravation of its relations with the West, the reasons for these changes in the Russian information space may be:

The first and second versions are fully in line with historical Russian traditions. The second and third may take place, but it is unlikely that anyone in Russian government will publicly criticize Putin’s policy for these purposes.

Therefore, in Russia, the process of power transformation has probably begun, which may take the form of a planned transfer of Putin’s presidency to another person, including N. Patrushev, or the preparation and implementation of a revolt by a group of people in Russia’s ruling elite.

As we know from history, the change of power in Russia may result in the preservation of stability in the country or its sharp destabilization, for example: Troubled times after the death of Tsar Ivan the Terrible in 1598; the collapse of the Russian Empire due to the Bolshevik coup in 1917; disintegration of the USSR in 1991 after an attempt by rebels from the so-called State Committee on the State of Emergency to seize power in the country.

The same awaits today’s Russia if it continues the war against Ukraine, which Moscow obviously cannot win. Especially in the face of confrontation with the entire civilized world, which already understands a reasonable part of the Russian ruling elite. Evidence was the statement of N. Patrushev from June 15, 2022, on “Russia’s being interested in reaching political and diplomatic agreements with Ukraine as soon as possible, which would allow the cessation of hostilities”. It can be assessed in different ways. However, it is noteworthy that the statement was made on the day of the meeting of Ukraine’s partners in the Rammstein-3 format at NATO Headquarters in Brussels, as a result of which a decision was made to continue arms supplies to our country.

In support of these assumptions, we would like to cite key theses of Russian central media publications that contradict the policy of the Russian government and have been published recently. The most significant of these are the editorials of Nezavisimaya Gazeta — “On the Reputational Consequences of Calls for a Revision of Post-Soviet Decisions” and “In the Power of Muddy Intuition. Autocratic Russia Is Losing the Instinct of Self-Preservation”, by O. Tsupko, Doctor of Philosophy, Chief Research Fellow at the Institute of Economics of the Russian Academy of Sciences. By the way, his article was republished on the day of Putin’s speech at the plenary session of the St. Petersburg International Economic Forum on June 17, 2022.

The following theses were outlined in the above-mentioned and other publications:

Based on these estimates, in fact, several conclusions are drawn, namely:

In fact, these theses are confirmed in the publications of regional media, although they mostly relate to regional issues. In this regard, the most interesting are the articles of the mass media of Russia’s regions bordering on Ukraine, which directly feel the consequences of the war. In particular, the mentioned media cover the following problematic issues:

Of course, for now, critical coverage of Russia’s central and local media on the policy and actions of the country’s ruling elite is rather the exception to the rule. However, in Russian realities they are significant.