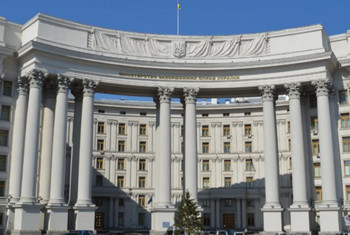 Information about the Russian invasion

Ukrainian diplomacy is systematically working to ensure that foreign companies cease their activities with the occupying power and immediately withdraw their business from Russia. Today, the German company Bosch announced the suspension of components for trucks to Russia and Russian customers, because Russia has used its products for military purposes.

Dmytro Kuleba: “We will definitely continue to reveal all the facts of sponsorship of the Russian military machine by foreign companies and put pressure on the immediate exit of foreign businesses from Russia. And in general, any decent international company has no place in Russia. “

Support of the world

. In his speech, the Head of State called for a complete freeze on the financial assets of those who are involved in the full-scale war against Ukraine

Refusal of the gas needle of the Russian Federation

will not renew its natural gas supply contract with Russia’s Gazprom amid the war in Ukraine. The contract expires at the end of the year

Isolation of the Russian Federation

57 cities in Poland have unilaterally terminated cooperation agreements with 48 cities in Russia and 12 cities in Belarus.

One of the largest oil service companies, Baker Hughes, is halting investment in Russia over the war against Ukraine.

The German company Bosch is preparing for a complete cessation of production at Russian plants, including the household goods plant in St. Petersburg

has donated more than two million medical devices and equipment to Ukraine. Also, 21 children with cancer came to Britain for treatment.

The Hungarian government has sent another humanitarian convoy to Ukraine – 5 trucks with emergency medical supplies, as well as food and hygiene products.

The International Committee of the Red Cross in Monaco donated 268,000 euros worth of medicines and equipment to the Center for Pediatric Neurosurgery in Kyiv.

Since the start of the full-scale Russian war, Croatia has provided Ukraine with almost 115 tons of humanitarian aid, as well as firefighting equipment worth about $ 60,000.

Five trucks of humanitarian aid from Georgia were unloaded in Lviv.