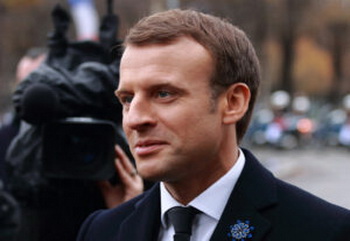 Analogizing the situation with COVID-19 to a war, Macron has called for EU solidarity to fight the virus

After years of falling in line with German priorities at the EU by focusing on economic matters, French president Emmanuel Macron is now an advocate for change. He believes geopolitics should be interwoven into the future of Europe and proposes an ambitious new strategic doctrine — one that challenges the conventional wisdom on NATO, Russia, and China; emphasizes the EU’s role in world affairs; and boosts the French presence in the Eastern Mediterranean. But the ongoing coronavirus crisis has put his plans on hold. As the pandemic continues to wreak havoc on the Continent, Macron is calling for greater solidarity and supports the issuance of joint European debt to finance the fight against the virus — an idea Germany is resisting.

The European debt crisis highlighted Germany’s political dominance within the EU. Berlin took the lead in making critical decisions about austerity policies, the inclusion of the IMF in bailouts, and the involvement of the private sector in debt restructuring. As the game was being played on the German terrain of economics, France’s role in the EU was overshadowed at the time. Paris still had its voice heard on occasion — for example, when it insisted in 2015 that Greece remain in the Eurozone — but it generally acceded to the German-dominated political order.

This began to change after the 2017 French presidential election. President Emmanuel Macron seems determined to revive his country’s faded glory.

While German Chancellor Angela Merkel considers the fiscal compact and the obeying of rules sine qua non for the future of the Eurozone, Macron appears to be more flexible. He envisages a Europe that features more investment and sustainable growth. Although he has not managed to persuade Merkel to accept his core reforms, he is an ambitious politician with a vision for Europe and a desire to make it a reality.

This has become particularly evident during the coronavirus pandemic. Analogizing the situation to a war, Macron has called for EU solidarity to fight the virus. Significantly, he backs the idea of coronabonds, a debt instrument with which to provide support for European countries in need such as Italy. Together with the leaders of Italy, Spain, Portugal, Slovenia, Greece, Ireland, Belgium, and Luxembourg, Macron signed a letter advocating coronabonds. Germany remains resistant to this idea.

Macron is leading a push for the EU to acquire not only more economic powers but also more security powers. The momentum prior to the onset of the pandemic favored his cause. New European Commission President Ursula von der Leyen pledged to lead a “geopolitical” team. Geopolitics is not an area where Berlin can take the lead, because Europe still retains vivid memories of the two world wars. In Macron’s view, this represents an opportunity for France.

In a remarkable interview with the Economist after the withdrawal of US troops from Syria, Macron called NATO “brain-dead.” As shocking as this was to the international community, he was telling the truth about an alliance that is struggling to respond to new challenges with old remedies in the post-Cold War era.

In the interview, Macron addressed the ambivalent messages sent by the Trump administration toward Europe and said he believes Europe should gradually move toward building its own defense. The French-led European Intervention Initiative that he announced in 2017 and launched a year later could contribute a good deal to this goal. The Initiative, which is not only limited to EU member states (the UK has already joined), aims at cultivating a common strategic culture and contributing to NATO and other European projects such as the Permanent Structured Cooperation (PESCO).

Only a few days after Brexit was concluded, Macron unveiled his country’s nuclear doctrine. France, now the only nuclear power in the EU, sees the ongoing nuclear arms race as a global threat and strongly emphasizes deterrence. Presenting his country as a paradigm, Macron encourages his European partners to join a strategic dialogue on how conventional security and defense policy can be combined with nuclear deterrence. He favors engagement with Russia and China and believes Russia should be a constructive player in European security. He wants to see the EU navigate smoothly between the US and China in the new technological Cold War.

France has been militarily involved in the fight against terror in Africa and the Middle East for years, and was recently present in the Persian Gulf and the Eastern Mediterranean. The French frigate Courbet was the first European vessel to take part in the European Maritime Security Initiative in the Strait of Hormuz. The French helicopter carrier Dixmude conducted exercises with Greece, the US, Turkey, Tunisia, and other countries. Significantly, the French aircraft carrier Charles de Gaulle docked in Limassol and participated in drills with Greece and Cyprus. On the occasion of the Charles de Gaulle’s presence in the Eastern Mediterranean, the Times of Israel reports, Israeli pilots in F-16s and French pilots in Dassault Rafale aircraft simulated three-on-three combat in mixed teams.

In an effort to bolster its presence in the Eastern Mediterranean, Paris has applied to join the East Med Gas Forum. The French company Total participates in natural gas drilling in the Exclusive Economic Zone of Cyprus and Lebanon. Greece and France are expanding their defense collaboration. Athens has decided to upgrade its Mirage 2000 fleet and is considering upgrading its NH-90 helicopters as well as the purchase of two Belharra frigates. Cyprus will reportedly also buy military equipment from France.

At the end of January, Macron agreed with Israeli PM Benjamin Netanyahu to launch a strategic dialogue. France is also reenergizing its ties with Egypt, with Minister of Defense Florence Parly meeting with Egyptian president Abdel Fattah Sisi in Cairo at the beginning of March. Paris has been critical of Turkish policies in the Eastern Mediterranean, particularly Ankara’s actions in Libya and its memorandum of understanding on the demarcation of maritime zones.

Emmanuel Macron is a strategic thinker and a leader, but it cannot be foreseen whether or not his ambitions will influence Europe. Germany acknowledges the urgency of the effect of the coronavirus pandemic on the European economy but is resisting ideas like coronabonds that deepen integration.

The public health crisis is causing unprecedented uncertainty in many realms. Sailors on the Charles de Gaulle have come down with coronavirus, and the Iniochos-2020 military exercise, which was to have taken place in the Mediterranean in May with French participation, has been canceled. The capacity of countries like Greece and Cyprus to buy French military equipment will have to be reexamined in light of the crisis, and the impact of the disease on energy developments in the Eastern Mediterranean has yet to be assessed.

About author:
Dr. George N. Tzogopoulos is a BESA Research Associate and Lecturer at the European Institute of Nice and the Democritus University of Thrace.