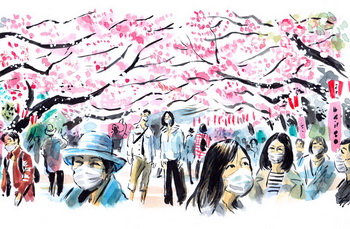 Geographically small, but geopolitically powerful, Japan can be an example for many countries to follow

Effective work to prevent the epidemic in Japan is instructive, although the country has a highly developed culture and effective principles of organization and functioning of the state apparatus. At the heart of the success is the discipline of the society in adhering to the standards of hygiene, in recognizing the need to use safety measures and successful isolation of certain social groups in places of compact residence.

Compared to the empty streets of European cities, Japanese people can easily move around and enjoy the cherry blossom season.

Thanks to two features, Japan was able to control the pandemic. First, the spread of the virus was hindered by traditional Japanese greetings with bows, which do not involve contact with hands or face. Second, it is important that the Japanese learn to adhere to basic hygiene measures from a young age.

The high national consciousness and the highly developed culture of the Japanese show that the Japanese nation is able to consolidate to meet unexpected and dangerous tasks. Geographically small geopolitically powerful, Japan can be an example for many countries to follow.

Please note that the history of international relations between Ukraine and Japan has long-standing roots. The current relationship began in 1992, but so far it is not as intense as they should be due to our short-sighted cooperation policy.

The Government of Japan, always respectful of Ukraine, from time to time provides considerable financial resources for the needs of our citizens. Usually, these are grants in the culture sphere. Japan’s Embassy in Ukraine is active, unlike ours in Tokyo. Obviously, it is time for us to work more closely with our partner in the Far East to once again realize our own geopolitical role in curbing Russian aggression.

…In the meantime, an active volcano with the speaking name “Bogdan Khmelnitsky” on Iturup Island, captured by Russia by deception, is waiting for the development of events useful for Ukraine and for the Ukrainian initiative.