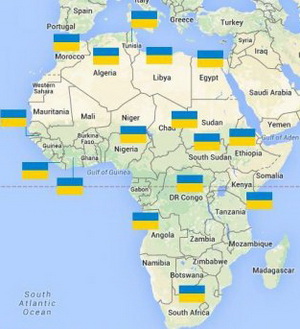 Economic and Security Prospects for Ukraine on the African Continent

Ukraine’s geopolitical positioning in the international arena presumes the country’s transformation from an object to a subject of international politics. This means that taking into consideration the interests and contradictions of the world’s greatest players — the United States, Russia, China and the European Union — our state should use its prerogatives where it is appropriate and most profitable.

However, there is one more region where the interests of our state, despite the presence of significant economic, political and security prospects, are still represented quite modestly. I mean Africa.

Of course, Ukraine cannot compete with the world’s centers of power that have interests there — France, China, the United States, Russia, etc. This, as well as a certain remoteness from the African continent and the lack of meaningful cultural and historical ties, makes us content with minor roles. The situation is also complicated by the fact that most Ukrainian industrial goods (with the exception of certain weapons and some others) cannot compete in local markets. Therefore, there are only a few niches where Ukraine will be able to achieve desired results.