Analysts and experts of the Independent Analytical Center for Geopolitical Studies “Borysfen Intel” (Kyiv, Ukraine) have prepared the special issue of “HYBRID WARS” AS A CONTINUATION OF “HYBRID POLICY”,under the general editorship of Vice-President of the Center, Candidate of Military Sciences, Associate Professor, Lieutenant-General (ret.) Yuriy Radkovets.

In the context of the Russian annexation of the Autonomous Republic of the Crimea and Russia’s armed aggression in the East of Ukraine, leading Western 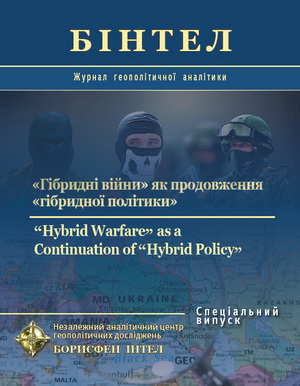 and Ukrainian political scientists and analysts have again “discovered” for themselves the concept of “hybrid warfare” or “hybrid” ways (methods) of organization and conduct of one country’s armed aggression against another country (other countries).

But the phenomenon of “hybrid warfare” is not new. This is not a “revolutionary innovation”, because both, ancient and modern history knows many examples of it. Although each component of “hybrid war” in fact is not new and was used in almost all wars of the past, but there are unusual aspects in it: final uncertainty of the content, orientation and relationship of these components; high degree of unpredictability, dynamism and flexibility in the sequence of their application; edginess, deceit and cynicism of their actions, and growing importance of information, economic, energy and other aspects. At this, these aspects in some cases become dominating separate components and are no less important than the military (force) one.

There is no doubt that with time and development of new (high) technologies, “hybrid warfare” has undergone many upgrades and transformations, and today it is a true war — “hybrid” by the form and “asymmetrical” by meaning, and at this it is getting increasingly alarming and hard to find out. That is why the Russian annexation of the Crimea and aggression in the East of Ukraine have become a new impetus for the analysis and assessment of the phenomenon of the modern “hybrid war” by a reputable Ukrainian and Western experts.

The analysis by experts of the Independent Analytical Center for Geopolitical Studies “Borysfen Intel” of available materials has showed that in these works they quite convincingly, thoroughly, deeply and professionally have analyzed the phenomenon of the purely “hybrid war” (“hybrid peace”), have defined its pre-conditions, stages of development and components (including informational, economic and energy ones), have emphasized the increasing role and place of non-military methods of pressure and using “asymmetric measures” against the enemy. In this context it is necessary to distinguish between these components, so perhaps it is appropriate to use the terms “hybrid information war”, “hybrid economic war” and “hybrid energy war”. 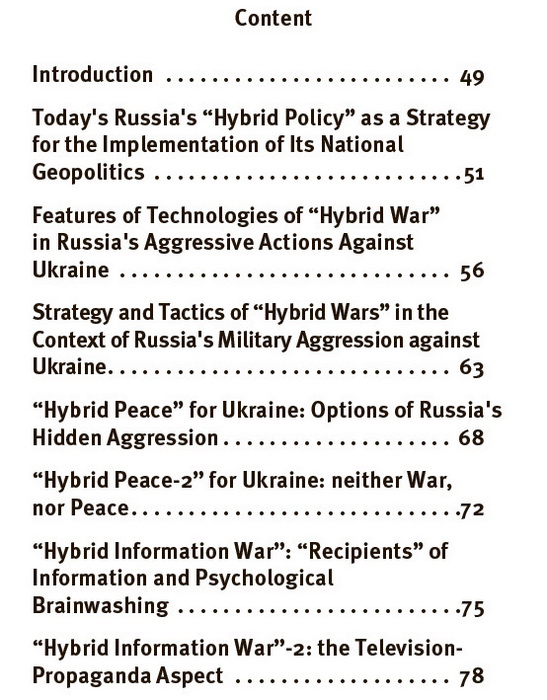 The well-known correlation of the categories “war” and “policy” shows that “… war is the continuation of politics by other means”. In the current situation of the Russian Federation’s actual using against Ukraine of technologies and mechanisms of “hybrid war” (“hybrid peace”), a logical question arises: what is the essence, content and focus of the Russian Federation’s “hybrid policy” towards Ukraine and countries of the former Soviet Union, member-countries and countries-partners of the European Union and NATO, and other Western countries? And in general, how can be defined the concept (category) of “hybrid policy”?

At the same time, none of the analyzed works provides the fundamental definition of the concept of “hybrid policy”, or an assessment of this phenomenon, the derivatives of which are “hybrid war” and “hybrid peace”. In this context, these studies are considered not quite complete.

That is why, in their studies, experts of “Borysfen Intel” have concentrated the main attention on the structural-functional integrity of the complex system of the following socio-political factors (aspects): “politics”, “war”, “peace”, “security”, “threats” “enemy”, “ally”, etc. and information connection between them. That is, we have used a systematic-structural approach to consistency and focus, as well as elements of cognitive modeling in estimating interrelations of practical activities of the Russian Federation within the framework of its policy of recent decades towards the European Union, NATO and the USA, as well as towards post-Soviet countries immediately after the collapse of the Soviet Union and their proclamation of independence.

Based on the results of the work there has been defined the concept of “hybrid policy,” and has been stated that this is a geopolitical category. In this connection, it has been concluded that in geopolitical plans and projects of the Russian Federation today increasingly dominates its national geopolitics and somewhat modified rule of force. That is, today’s Russia’s geostrategy is aimed first of all at observing only its national interests.

In other materials of the special issue, experts of the “Borysfen Intel” on the example of the Russian annexation of the Crimea and military aggression in the East of Ukraine, share the results of researches on the characteristics of the phenomenon of “hybrid war” and “hybrid peace”: their strategies, new technologies and mechanisms for the preparation and conduct (including informational, economic and energy), analyze a number of options of Russia’s hidden (“hybrid”) aggression against Ukraine, etc.

The Independent Analytical Centre for Geopolitical Studies “Borysfen Intel” does not claim to ultimate perfection of the research on a particular subject and is ready for a fruitful discussion, including on our website or in the “round table” on this and other topical questions of the development of Ukraine’s geopolitics.