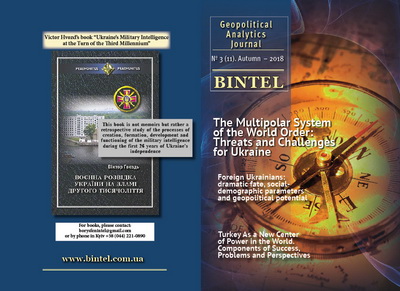 The issue of the “BINTEL” journal, which will be sent to our subscribers in September, differs greatly from previous ones, but not by the contents of the articles published in it, but in the format. Firstly, when you take it into your hands, you will feel its being lighter, so to speak: “BINTEL” is smaller and lighter, the headlines of major publications are on the front cover. Secondly, it is no longer bilingual, as it was before. The English version is printed separately. But we draw our readers’ attention to the increased volume of the journal: articles in one language with illustrations are placed on eighty pages. We hope that our readers will be happy with such changes.

As for the content of the new issue of the journal, everything remains the way we promised — the publications refer to the modern Ukrainian geopolitics, its history and the prominent Ukrainian personalities’ role in the fate of the Ukrainian state. It is about this that Victor Hvozd, President of the Independent Analytical Center “Borysfen Intel”, reminds in his article “The Multipolar System of the World Order”, in which he names the main players of modern geopolitics, explores the threats and challenges for Ukraine, their reasons and possible consequences for it, analyzes national security strategies of states such as the USA, China, Russia, mentions regional leaders of the multipolar world, such as the EU, Russia, India, Brazil, South Africa, etc.

We also advise our readers to pay attention to Doctor of Geographical Sciences Myroslav Dnistryanskyi‘s another article about the Ukrainian diaspora. It is difficult to overestimate the urgency of the theme touched upon by the author, because today it is not enough to mention Ukrainian citizens’ presence abroad at all levels of the state or to voice it as an unexpected problem. It is necessary to gain courage and to point to the reasons for such “unexpectedness”. And pointing out, to try and do everything possible to resolve the problem in a civilized way, that is, to correct the situation so that Ukrainians feel a comfortable life at home, in Ukraine, and not in remote or nearer worlds. As to the article “Foreign Ukrainians: Dramatic Fate, Social-Demographic Parameters and Geopolitical Potential”, the author, with his reasonableness, points to the reasons that had led to “the great number of ethnic Ukrainians living outside Ukraine”, to historical and political preconditions of this so-called process, to the socio-political and economic potential of the Ukrainian diaspora itself, which can be useful not only through the sending of the earned money… “But no less significant is the fact that organized Ukrainian groups in the future can provide Ukraine with more substantial support in the information, socio-economic, political and cultural spheres due to the impacts on different environments of their countries of present residence” — says M. Dnistryanskyi in his article. And he mentions the number of Ukrainians who currently live in Russia, Belarus, Poland, Slovakia, Romania, Moldova, Canada, the USA, Argentina, Brazil, Germany, France, Great Britain and other countries, including the Balkans and former Soviet republics. “Positive examples of national-state development in Ukraine could give new impulses in preserving the cultural identity of foreign Ukrainians and strengthening their geopolitical influence”, concludes the author of the article. 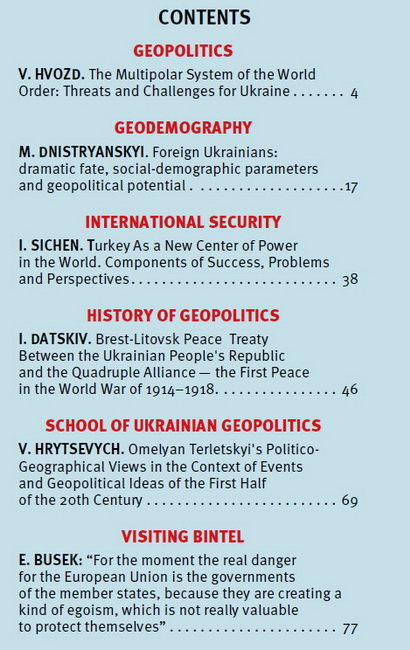 Two more publications of this issue of the journal refer to the history of Ukrainian geopolitics. Under the heading “History of Geopolitics”, Doctor of Historical Sciences Ihor Datskiv in his article “The First Peace in the World War of 1914–1918. Conditions of Signing of the Brest-Litovsk Peace Treaty Between the Ukrainian People’s Republic and the Quadruple Alliance” mentions events of a century ago, when in 1918 Brest-Litovsk Peace Treaty was signed. Under the heading “School of Ukrainian Geopolitics”, Ph.D. in Geography Volodymyr Hrytsevych writes about “Omelyan Terletskyi’s Politico-Geographical Views in the Context of Events and Geopolitical Ideas of the First Half of the 20th Century”. The authors point out that, among other things, these publications are relevant not only due to the importance of those events, but also because they are in one way or another connected with the present. Significantly, nowadays their round anniversaries are celebrated, that is, 100th anniversary of signing the Brest-Litovsk Treaty, and O. Terletskyi’s 145th birthday.

I. Datskiv, in particular, writes: “It is interesting that, objectively reconsidering the history of the Ukrainian Revolution of 1917–1921, we will necessarily take into account some aspects in the context of the signing of the Brest-Litovsk Peace Treaty and the circumstances in which Ukrainians had to apply to Western partners… But no less interesting is the fact that the events of a century ago are very similar to today’s, demonstrating, by and large, the incompleteness of this topic, fateful for the Ukrainian state-building, and therefore its relevance”. It is difficult to disagree with this conclusion of the author of the article, especially in the light of what is happening in and around Ukraine. One also can’t help considering O. Terletskyi’s words that “…In the future, when Ukraine becomes independent, and having taken under its governing the Crimean Peninsula, firmly stands on the shores of the Black Sea”, and in this regard, the conclusions presented by the author of the article V. Hrytsevych sound relevant: “…According to O. Terletsky, the Crimea is a very important geopolitical element of an independent Ukrainian state. What, incidentally, should have remembered Ukraine’s current leaders, who took responsibility for restoring its statehood and further development. And keeping this in mind, they should have pursued a well-considered policy that would not have led to our serious tests today, including armed hostilities”.

Under the heading “International Security”, the journal published the article “Turkey As a New Center of Power in the World. Components of Success, Problems and Perspectives”. Its author, Military Expert Ivan Sichen analyzes the state of affairs of our south-eastern neighbor, highlights its political successes and economic miscalculations, draws attention to its relations with its rivals, allies, NATO partners, and, in particular, the United States and Russia. “The multi-vector policy gives Turkey the opportunity to balance its interests in the overall system of international relations”, the author of the article emphasizes. — “Despite the growing disagreements with the USA and the EU, Turkey is increasingly becoming part of the Western world. It already plays a prominent role in ensuring European and Euro-Atlantic security”. As for Turkey’s next political steps in its desire to become and be a notable political player in the current geopolitical theater, in particular in the Middle East, where a strong knot of world contradictions has emerged, — the author reasonably gives his arguments. Regarding the events concerning Ukraine, the author believes that “…Building up the volume of bilateral trade relations with Turkey allows Ukraine to compensate for the losses caused by the so-called trade wars with Russia. At the same time, Ankara’s active position on the Crimea and the problems of the Crimean Tatars helps to keep the international community’s constant attention drawn to the Crimean problem and to strengthen international pressure on Putin’s regime”.

Under the traditional heading “Visiting BINTEL”, the journal contains an interview with former Vice Chancellor of Austria (1991–1995), Chairman of the Institute for the Danube Region and Central Europe (IDM) Erhard Busek. He has his own point of view on the developments observed in the EU and the world, which he shared answering the questions asked. Those questions concerned the creation of a European army, the UK’s withdrawal from the EU, Russia’s further policy after V. Putin’s having been elected as RF President, implementation of the Russian project “Nord Stream 2”, as well as some Austrian companies’ cooperation with the Russian Gazprom. We also asked him about the effectiveness of Austria’s investments in the economy of Ukraine and the conditions under which these investments can increase. To all these questions, Mr. Busek gave meaningful answers, which were published in the journal under the title “For the moment the real danger for the European Union is the governments of the member states, because they are creating a kind of egoism, which is not really valuable to protect themselves”.