December 11, 2015 in the Polish town of Swinoujscie the first tanker of liquefied natural gas (LNG) was unloaded. The media point out that through this terminal already now it is possible to import during a year equivalent to 5 billion of the so-called “piped” natural gas, which is at least one third of Poland’s annual consumption. Another one third is produced in Poland. The rest is filled by importing. 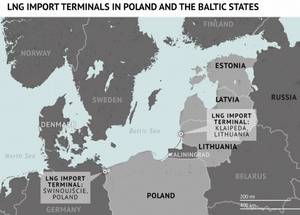 Until that moment, the Polish technical infrastructure had been importing gas from Russia. It was 8 to 10 billion cubic meters of gas a year — depending on the average temperature. When the terminal in Swinoujscie starts working at full capacity (within a year), the supply of gas from Russia to Poland will be reduced almost by half: to 5-6 billion cubic meters. When the terminal starts working at the level of the planned capacity, and the Poles develop new gas fields, then in 1-3 years they will be able to stop buying Russian natural gas.

By the way, the construction and in the future expansion of the LNG terminal in Swinoujscie is actually putting into practice the idea of the late Polish President Lech Kaczynski on complete independence from Russian energy supplies. For nearly seven years, this idea has been implemented, and now the whole world sees the sequence of steps of the official Warsaw.

Of course, such an event deserves not just our sincere congratulating the Poles on their another practical success, but also our immediate studying the Polish experience for immediate using it here in Ukraine.