An alarming meeting of Lviv scientists took place March 16, 2016 after a series of such events all over Ukraine, which had to draw attention to the Ukrainian scientific community, which develops (or self-destructs?) “thanks to”, first of all, underfunding and inadequate personnel management.

The whole history of mankind clearly shows that if the state stops fully fund its science, it is doomed to disappearing. Now has even been defined a critical lower threshold of funding — 0.9 % of GDP. Here we talk about the total financing: from the budget, and at the expense of industry. Ukraine does not fit into this frame, unfortunately, at least in recent years. The state annually allocates a total of 0.6 % — 0.8 % of GDP. In particular, the state budget finances the basic science at the level up to 0.3 %. Although there is the Law of Ukraine “On Scientific and Scientifically-Technical Activity” of 13 December 1991, which provides for public funding of science at 1.7 % of GDP. So, the legal requirements are not met. Largely Ukrainian science exists at the expense of old Soviet resources. Besides, it should be noted that the overall expanses allocated at a scientist in Ukraine are at least three times lower than those allocated in the RF and are almost 70 times (!) lower than such expanses in the USA, not to mention the leader of the scientific and technological development — Japan. In this question we are also far behind the EU countries, in particular — our neighbors.

We should say that the scientific environment everywhere, including in Ukraine, is the most apolitical, the most modest, tolerant, and so on. On the other hand, it is very difficult or even impossible to come the raw prawn with scientists because any message, report, or promise they can objectively analyze and draw an objective conclusion. That is why the scientists’ words were, are and will be the most influential in the society. Ultimately, it became the foundation of freedom of thought in the Soviet era. Mind you, true scientists made the highest percentage among the Ukrainian national revival activists in the late 1980s — early 1990s, headed by the People’s Movement of Ukraine. 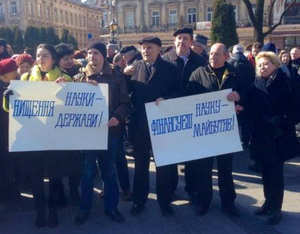 Taking into consideration these and other no less important circumstances, at first glance, it seems strange, that for almost 25 years the Ukrainian science has been actually self-destructing. There is every reason to believe that financing and personnel decisions, and a lot of other things have been blocked, for the most part, by the middle and lower echelons of the Ukrainian authorities involved in the maintenance of activity of the Ukrainian science, who sometimes even ignored the position and intentions of the “tops”. Fifth column? It seems to perfectly resonate with the statement of the leader of one of the states about “Ukraine — a failed state”…

Especially surprising it is now, during the Russian aggression, when it is necessary to initiate the meeting and individual consultations with the leading Ukrainian scientists and engineers versed in weapons and their components, like it happened in the 1940s in the Soviet Union, when the atomic project was being implemented. Of course, this should be done, regardless of the position of foreigners, just like once Israel had done before the war with the Arab countries. Let foreign secret services “beat their foreheads,” trying to find out, whether Ukraine is resuming its nuclear capabilities! This would encourage Western countries to be resolute in the dialogue with the current aggressors.

It is clear that too little public funding for Ukrainian science is due to a lack of funds in the state budget. This is logical, because there was no money for this, and it won’t appear very soon. And if it came from somewhere, they would go straight to those who are less polite than scientists, and can demand more aggressively. But other questions in science, in particular human and institutional, from finance depend less. They can and must be addressed urgently.