V. Putin’s main political step on the eve of the presidential election in Russia was his address to the Federal Assembly of the Russian Federation on March 1, 2018. In this regard, the apparent purpose of the Russian President’s speech was to strengthen his election positions in the face of the Russian population’s growing dissatisfaction with the country’s authorities. The reason for this situation is the aggravation of socio-economic problems in Russia under the influence of Western sanctions, which leads to an increase in protest moods in the Russian society. As a result, the spread of protests in the country and the fall of the image of the leadership of the Russian Federation, including of the RF President himself.

In particular, according to sociological surveys, in February this year, Putin’s rating fell to a historic minimum of 69.5 % from almost 90 % after the attack on Ukraine in February 2014. Of course, under the existing system of state power in the Russian Federation, he is guaranteed to win elections even in his rating falls to an absolute zero. However, the high probability of prospects for further deterioration of the situation in Russia, which will be accompanied by further spread of social unrest, needs maximum legitimization of such a victory. It is that that Putin’s address to the Federal Assembly of the Russian Federation counted on, as it had a frankly populist character with widespread use of clutter of facts, groundless promises and even open and clear-cut lies.

For example, the RF President’s speech consisted of a traditional collection of his fateful assertions concerning: the historical and turning point for Russia; the country’s ability to renew and move to the future; overcoming economic and social challenges and moving towards sustainable development in all spheres; Russia’s being one of the leading powers with a powerful economic and military potential.

Based on this, Putin determined a list of Russia’s priority tasks, namely the achievement of a technological breakthrough and stopping Russia’s lagging behind other countries; raising the living standard of the population; improving the quality of health care and education; urban and transport infrastructure development; asserting the country among the five largest global economies of the world and increasing the GDP per capita by 1.5 times over the next ten years. In a word, the standard “gentleman’s set” of the next presidential promises before the next presidential election of a permanent leader of the Russian nation, which is like certain pariah regimes, where power is taken for life.

Russia must firmly assert itself among the five largest global economies, and its per-capita GDP must increase by 50 percent by the middle of the next decade

At this, as sources of resources for fulfilling the above mentioned tasks were mentioned: increase in labour productivity at a rate at least 5 % per year; increase in the volume of investments; promoting of small businesses; development of non-resource exports, including machine engineering, agricultural products and services (including education, health care, tourism and transport).

At the same time, as usual, the RF President did not say a single word about how these tasks can be implemented in reality. Although, objectively speaking, he could not do that. The unreality of practical resolving Russia’s economic problems without changing its foreign policy, first of all, without stopping its confrontation with the West, has not only repeatedly been proved by independent experts but has also been recognized by representatives of the Russian government.

Nevertheless, apparently, V. Putin is not going to give up his neo-imperial plans. Thus, the main part of the message of the Russian President was a demonstration of the growth of Russia’s military potential and readiness to use it against Russia’s opponents. At this, he traditionally called the USA and NATO the main adversaries, and accused them of Russia’s all-round harassment and violation of its security. First of all, in this context, were pointed out the USA’s withdrawal from the Anti-Ballistic Missile Treaty, adoption by the United States of revised Nuclear Posture Review of anti-Russian orientation, as well as the USA’s and EU’s sanctions against the Russian Federation.

According to V. Putin, in response to this, Russia must increase its military capabilities by adopting a significant number of new types of military equipment (including 80 new intercontinental ballistic missiles, 102 ballistic missiles for submarines, three “Borey”-class strategic missile submarine cruisers, etc.). In addition, in the RF President’s words, a complex of “cutting-edge weapons” was created that “is the only one of its kind in the world” and allow “to completely level off the attempts of the USA to gain ultimate unilateral military advantage over the Russian Federation”.

Among such weapons was the development of a new missile complex with a “Sarmat” heavy ICBM (allegedly already undergoing practical tests); a prospective strategic missile complex “Avangard” with a fundamentally new gliding wing unit (allegedly capable of flying in dense atmospheric layers at hypersonic speed); a small-scale heavy-duty nuclear engine that can be installed in an air-launched cruise missile X-101 (which allegedly allows to increase the flight range by dozens of times and has already been tested); unmanned submarines of the new generation (supposedly capable of moving at a great depth and at an intercontinental distance at a speed several times higher than that of other submarines, modern torpedoes and high-speed surface ships); combat laser complexes (allegedly coming to the troops); “Kinzhal” (Dagger) hypersonic aircraft missile complex (allegedly already put into trial combat duty in the Southern Military District of the RF Armed Forces).

Actually, V. Putin’s speech on military topics was most acute since his speech at the Munich Security Conference in February 2007, which in fact initiated a new “Cold War”. Thus, the confrontation between Russia and the USA and Europe was brought to a qualitatively new level. In fact, Putin’s regime went to another “raising stakes”, which has both internal and external goals.

Thus, in the domestic sphere, the main of these goals is once again to raise V. Putin’s rating on the eve of the presidential election in the country. At this, he relied on the aggressive, anti-Western and great-power mentality of a large part of the Russian society, which positively perceives the idea of Russia’s ”military superiority” over the United States and NATO. Moreover, such “superiorities” can be effectively demonstrated by the media and have a virtual character, in contrast to the country’s economic problems, which every ordinary citizen experiences.

In turn, in the external sphere, V. Putin’s demonstration of “the RF’s military power” was the answer to the West’s refusal to “reset” relations with it, for which Moscow has been hoping since 2014. The essence of such an answer is the intimidation of the United States and Europe with Russia’s missile and nuclear weapons, which fully repeats the politics of the former Soviet Union. By the way, in his address, Putin once again expressed nostalgia for the USSR, which he called “Russia”. Thus, Moscow’s claims to the entire post-Soviet space were confirmed.

At the same time, both, Russia’s “achievements” in the socio-economic sphere, and most of its “military superiorities”, which were voiced by V. Putin, were a bluff characteristic of the Kremlin’s current policy. In particular, this concerns “unique” new weapons that have no analogues in the world, — but then they cannot have them because they do not exist in reality or simply contradict the laws of physics. One of such weapons is the “Sarmat” missile (during the speech a video of a “Satan”s launch of 2007 was actually shown), submarines capable of “the speed several times higher than the speed of surface ships” and “nuclear engines” on cruise missiles.

In general, the above-mentioned circumstances draw a sad and dangerous picture of the situation in Russia. In fact, Putin’s address to the Federal Assembly of the Russian Federation showed a complete degradation of both, his ruling regime, which resorted to outright lies in order to stay in power, and of the Russian society to which those lies were addressed.

A consequence of this can be only further decline of the Russian Federation, taking the cue from Hitler’s Germany and the Soviet Union. Like, on the eve of the fall of the Third Reich in the spring of 1945, crazy Adolf Hitler also tried to frighten the world with “the absolute weapon of revenge” that he supposedly had. Who would have doubted that if he had really had it, he would inevitably have applied it.

During the Caribbean crisis in the spring of 1962, a similar bluff was used by Nikita Khrushchev, the then-USSR leader, who tried to intimidate the United States with the number and combat capabilities of nuclear missiles which the USSR allegedly had.

What should we expect in this regard from V. Putin, who is in the same situation? It’s hard to imagine. A person who is already outside the objective perception of reality, has a “nuclear button” and openly, before the whole world, threatens to press it. In his speech, the President of the Russian Federation made a special emphasis on Russia’s Military Doctrine, which allows to use nuclear weapons even against non-nuclear-weapon states. According to V. Putin, “there should be no doubt about this whatsoever”. 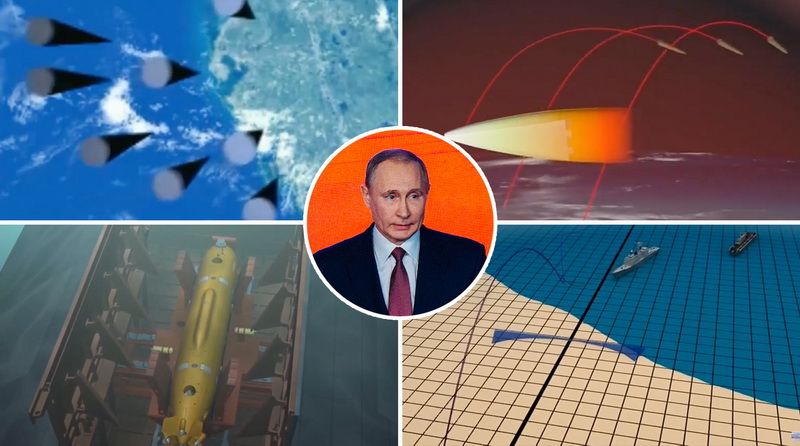 Of course, such statements by the Russian President could not but cause anxiety and a negative reaction from leading western countries. Thus, Putin’s speech was the subject of special talks between US President D. Trump, French President E. Macron and German Chancellor A. Merkel. At this, they were seriously concerned about the policy of the Russian Federation.

However, Putin could not intimidate either the United States or NATO. Commenting on Russia’s President’s address, the spokesperson of the US Department of Defense, D. White, expressed the USA’s absolute readiness to protect its security under any circumstances. At the same time, doubts were expressed about Russia’s having the weapons of which the RF President spoke.

Moreover, immediately after Putin’s speech, on March 2, US President D. Trump signed an order to extend for one year the sanctions against Russia which were imposed over the annexation of the Crimea. According to the order, Russia’s actions in Ukraine, including its purported annexation of the Crimea and its use of force in Ukraine, continue to undermine democratic processes and institutions in Ukraine; threaten its peace, security, stability, sovereignty, and territorial integrity; and contribute to the misappropriation of the assets of the Ukrainian state.

By the way, in his speech, V. Putin did not in any way mention the Ukrainian issue, which was the root cause of all the problems that Russia has faced. This shows that he actually acknowledges the fact that the issue of Ukraine is not adding to his authority, but is actually undermining it.

Besides, unlike in previous years, minimal attention was paid to the prospects for constructing the Eurasian Union, which has strategic significance for Russia in terms of counterbalancing the EU. Thus, the practical futility of implementing such Moscow’s intentions was also recognized as a result of the lack of resources for it.

In general, despite V. Putin’s attempts to show Russia’s significance as a leading and influential country in the world, he actually showed its final move to the camp of the pariah states, capable only of threatening with the use of military force. But then even such capability seems to be a growing bluff of the Kremlin, even though it clearly threatens international peace and security.