January 12, 2018, US President Donald Trump did sign the extending of Iran sanctions waiver, although on the eve of the day he said he would not do so because it contradicts his election promises. But it happened.

Now, the US Congress has 60 days to decide whether to impose new sanctions or not.

The Foreign Ministry of Iran immediately commented on the decision of the President of the United States. For example, Iran’s Foreign Minister Mohammad Javad Zarif said that the “nuclear deal” was not subject to discussion and urged the head of the White House to comply with the agreement.

President of France Emmanuel Macron also called on D. Trump to adhere to the deal with Iran. “France expresses readiness to implement agreements and considers it important that all participants comply with their obligations”, said E. Macron.

The official spokesman for the Ministry of Foreign Affairs of the People’s Republic of China Lu Kang stated that China is against any Washington’s one-sided sanctions against Iran and for maintaining the “nuclear deal”. He also added that Beijing would not change its decision in the future.

A senior official at the White House administration said that the President “intends to work with our European partners on some kind of follow-on agreement that enshrines certain triggers that the Iranian regime cannot exceed related to ballistic missiles”. Meanwhile, the US Department of the Treasury has added to the sanction list 5 individuals and 9 legal entities involved in violations of human rights and participation in the IRI’s missile program.

In the US President’s words, he did it for the last time. Time will tell, but now it’s more important to understand Washington’s logic. D. Trump in his national security strategy explicitly speaks of the need to neutralize Iran’s “malignant” impact on the development of the situation in the region and prevent it from obtaining nuclear weapons. He openly calls the deal disastrous for US interests and promises to do everything for its revision. So, Washington, in fact, has specific goals on the Iranian direction. Accusations of human rights violations during recent protests may be the reason for a new round of pressure on Tehran. 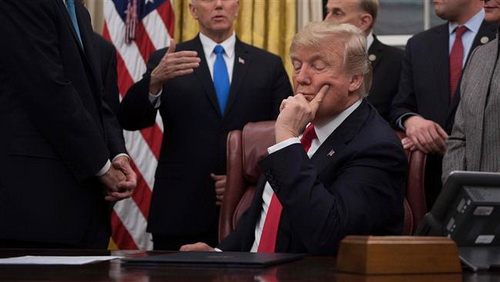 So what is the logic of the White House’s actions to extend the easing of sanctions? Let’s try to understand.

Firstly, at present, Iran is actually the only regional power that is really fighting the jihadists of Iraq and Syria. For Washington, it’s important to control the situation in the Middle East region and put an end to chaos and war. The Coalition is limited in its actions and resources. For the USA itself, this war is very burdensome, so why not to have your goal achieved by your opponent, who will be exhausted in this struggle!?

Secondly, after a series of defeats in Syria and Iraq, the “Islamic State” (ISIS) has lost its hierarchical system, but there remained a network of groups and units conducting sabotage and guerrilla warfare. And while the Iraqi government is rebuilding the army and police, pro-Iranian Shiite groups are maintaining the illusion of order in central Iraq.

The presence of pro-Iranian forces in Syria guarantees Washington playing on contradictions between Turkey and Russia. Iran itself also has a number of disagreements with Moscow over B. Assad’s regime. Therefore, it is still beneficial for the USA to control all the players in the Syrian conflict.

The popular riot in Iran at the end of December 2017 highlighted some of the serious problems of the Iranian regime, which the USA is trying to use. First of all, to have its problems in Iraq and Syria resolved by Tehran.

All this created the conditions through which D. Trump’s contradicts his election promises, but the benefit from using Tehran in this game is unsurpassed by anything.

Therefore, both, the United States and Israel would be happy to see the decline of the Islamic regime in Iran, or at least the resumption of a full regime of sanctions, but not right now.

The Kingdom of Saudi Arabia believes that the ideal option is Iran’s stopping supporting Shiite armed groups in the region, but in no case the fall of its regime. At this, the Saudi Princes are well aware that it is virtually impossible to change the Iranian regime’s vision of the world.

Russia, albeit loudly demanding from the West not to interfere with the situation in Iran, itself is greatly interested in weakening its historical ally and opponent. Moscow has a direct benefit from destabilizing the Islamic regime and is interested in broad sanctions against it. The RF does not need a powerful and independent player in the international gas and oil market. Besides, a weak Tehran would easier agree to the division of Syria or the Caspian region. So, Russians will not delay the opportunity to arrange or take advantage of Iran’s destabilization, come a chance.

Thus, Iran has many diverse external and internal problems and contradictions, and around it there are many strong regional players ready to give impetus to any anti-Iranian protest. But as long as they need Iran in its current state, the “nuclear deal” will continue.