Like for other countries of Central-Eastern Europe, the disintegration of the Soviet block became a turning point in Slovakia’s history, which gave it a chance to return to Europe. At this the most important for the country was the peaceful disintegration of Czechoslovakia, which, unlike the disintegrations of the former Yugoslavia and the USSR, was not accompanied by armed conflicts and mutual long-term pretensions. 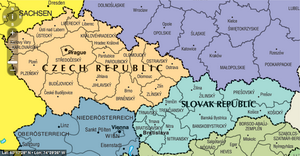 More so, keeping good-neighborly relations between Slovakia and Czech favored the speeding up of the processes of their European and Euro-Atlantic integration within the framework of realization of their joint projects of joining the European Union and NATO. The mentioned above became a typical example of possibility of peaceful and mutually beneficial coexistence of two countries which had been parts of a sole state.

In its turn, this helped Slovakia to turn from a component of ex-Czechoslovakia within the framework of the Soviet block into an independent country-member of the European Union and NATO. Alongside with purely geopolitical and state-building importance for Slovakia, the mentioned above processes had also important consequences for the country, which used to have one of the least developed economies in Europe, and now is a confident part of the sole European economic system.

Since the country’s joining the European Union in 2004, the government of Slovakia has been concentrating its efforts on the support of the main directions of the organization’s activity, such as : the Lisbon process, which suggests deepening the integration processes in the EU (Bratislava was one of the first to ratify the Lisbon Agreement in 2008); European policy of widening on the account of Western Balkan and Turkey under the condition of the obligatory fulfillment by them of the integration demands; European international and security policy; EU ’s measures for strengthening the European energy security; European policy of good-neighboring relations.

Within the framework of the mentioned above directions, one of the priorities of Slovakia is favoring the development of the dialogue between the European Union and its Eastern European partners from the former USSR, first of all Ukraine. In this concern, Bratislava is an active participant of the “Eastern Partnership” EU’s program.

Bratislava’s active participation in the work of the EU has created favoring preconditions for the economic development of the country both, due to drawing in European investments, and as a result of Slovakia’s joining the Schengen Area, which enabled free traveling about, work and studying of the Slovakian citizens in the EU countries.

Within the four years of Slovakia’s being in the EU(from May 2004), the country had got grants and help from the European Union in the amount, 10 times larger than an annual budget of the country. During that period of time in Slovakia had been built modern highways of European level (along which techno-parks are situated all over the country); a number of airports had been reconstructed and brought up to date; new recreational centers and hotels had been built in the High and Small Tatry.

Thanks to introduction of favorable investment climate, over the same period of time in the country had been placed the modern cars assembling plants such as: French “Peugeot” and Citroen”; German “Volkswagen”; South-Korean “KIA”. Besides, in the north of Slovakia there had been built a plant of “Samsung” firm, which produces TV-sets, mobile telephones, PCs and other domestic appliances. All this created new jobs for the population and enabled Slovakia’s access to modern technologies.

Besides, Slovakia became one of the most active participants of the European programs of transferring to alternative energy carriers, bio-fuel in particular, and began to produce the latter.

Despite a quite insignificant military potential of the country, Slovakia is also taking an active part in the activity of NATO, which gives favorable abilities for the country’s joining the European Union.

Thus, within the framework of NATO, the main efforts of Slovakian side are concentrated on fulfilling the obligations before the organization, which include: maintaining Slovakian Armed Forces in fighting readiness for the defense of the national territory; integration of Slovakian AAW (anti-aircraft warfare) System into the NATO’s AAW Common System (including involving the Slovakian fighter aircrafts in combat readiness within the framework of NATO and the deployment of new radio-locator stations at the country’s territory); placing Slovakian military subunits at disposal of NATO’s Reaction Forces; participation in NATO’s counter-terrorist and stabilizing operations, in particular, in Cyprus, Afghanistan and Kosovo.

Is considered important the support of the processes of transformation of NATO within the framework of the new Strategic Conception of the North-Atlantic Union, as well as helping to further widen the organization (first of all, by attracting the countries of the Western Balkans), which is one of the guarantees of securing the military security of the country.

Apart from this, Slovakia takes an active part in realization of the “Intelligent Defense” NATO’s Conception. In particular, within the framework of the allocation of military efforts of NATO, Bratislava has taken the responsibility for functioning of the Centre of mastering skill-at-arms of mine lifting and neutralizing ammunition for the sake of NATO Transformation-Command.

In the mentioned above context, a special attention by the government of Slovakia is paid to taking advantages of the new opportunities of the country (as a member of NATO), for technological re-equipment of the Slovakian Armed Forces and for their adaptation to the standards of NATO. Thus, within the framework of the realization of the “Long-term plan of the development of the Armed Forces of Slovakia up to 2015, Model-2015”, measures are taken in order to achieve the complete compatibility of the Slovakian Army with NATO. 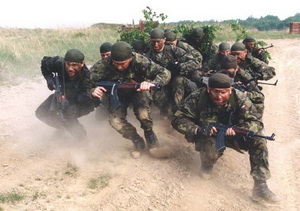 The mentioned above is being realized through: increasing the effectiveness of the system of the control of the troops by equipping them with modern ACS (Automatic Control System) and digital data exchange; ensuring mobility and efficiency of using troops by equipping them with armored equipment and withdrawing of the heavy models of the fighting equipment from the naval ammunition depot; renewal and modernization of the aircraft park of the Air Forces (in the first rate, destroyers and military transport aircraft); improving the equipment and increasing the individual defense of servicemen.

The main direction of the technological re-equipment of the Slovakian Armed Forces is a gradual replacement of the obsolete Soviet and Russian armament with the modern western models of armament and military equipment. At the same time, at the present moment quite a big problem in the realization of the mentioned above plans is a constrained reduction of Slovakia’s defense expanses due to the economic problems, connected with negative consequences of the world financial crisis.

A frequently asked question is: if joining the European Union means, in the first rate, its economic growth, what can NATO do for a country’s development apart from securing its military security? To answer it, we may give at least one example: construction of the Sliač main aircraft base of the Air Forces of Slovakia with the help of NATO allowed not only to bring that base up to the level of the main aircraft bases of the NATO member-countries, but at the same time to build a new international civil airport in Sliač, equipped with modern means of air traffic control. And all this is on the cost of NATO.

A separate important component of the European and Euro-Atlantic integration of Slovakia is the development of the regional cooperation of the country within the framework of Visegrad Group (V-4: Poland, Hungary, Czech and Slovakia). In the format of V-4 the main efforts of Slovakia are concentrated at ensuring the security in the region of Central-Eastern Europe and its proper development.