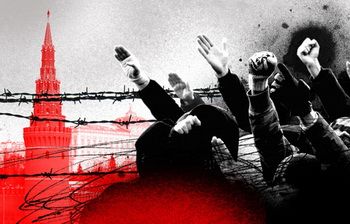 In our article “The Sting of Satan. Disinformation As a Weapon of Moscow” we assessed Moscow’s information campaign to justify Russia’s war against Ukraine. Today, such a campaign, like all the Kremlin’s attempts to destroy Ukraine, is increasingly failing. In particular, this applies to the dissemination in the Russian media and social networks of various publications and comments that contradict the official position of the country’s leader and even include direct criticism of their actions against Ukraine. This trend confirms the fact that the mood of Russian citizens is changing, they are beginning to understand the negative consequences of Moscow’s attack on Ukraine. At this, the Kremlin is clearly losing control of the media as one of the main tools for pursuing its interests.

As you know, since the beginning of Russia’s full-scale war against Ukraine, the leaders of the aggressor country have been conducting a powerful information campaign to justify their actions and ensure their support by Russian society. In fact, this has become another direction of Moscow’s aggression in the information sphere.

Thus, in order to influence the minds of Russians, the Ukrainian population and the world community, the Russian media continue to spread blatantly false allegations that “Ukraine was preparing an attack on Russia, which forced Moscow to act ahead to ensure its security”. Besides, Ukraine is accused of “pursuing a Nazi policy”, “oppressing the Russians on its territory” and “planning to destroy the “DPR” and “LPR”.

At the same time, the successes of Russian troops, which allegedly are winning decisive victories over the Ukrainian army, are being deliberately exaggerated. Russia’s attack on Ukraine itself is still called “the liberation of Ukrainians from the Nazis, supported by the majority of the Ukrainian population”.

Such a massive information campaign has finally destroyed the psyche of the Russians, who massively supported Moscow’s new attack on Ukraine. Moreover, the war has led to another “explosion” of neo-imperial sentiment in the Russian society and a wave of euphoria in anticipation of quick victories. At this, no one paid attention to Russia’s armed forces’ own losses (which allegedly did not exist). Especially since they were practically not reported in either the central or local media.

However, at present, some other sentiments are beginning to spread among the population of Russia and the ruling elite of the country, which is also reflected in the media. Most of the Russian media still remain on the Kremlin’s position. At the same time, we see various materials that go beyond the official course.

In particular, such materials contain expert assessments with fairly objective coverage of Russia’s war against Ukraine, including recognition of the failures of Russian troops and the right of the Ukrainian army to strike back, including on Russian territory. This is how explosions at oil depots and military storages, railway sabotage, and shelling of settlements in Russia’s border regions with Ukraine are beginning to be interpreted. Based on this, it is concluded that the war is returning to the Russian Federation itself.

The media also reflects the spread of panic among the population of Russia’s Bryansk, Kursk and Belgorod regions bordering Ukraine, which is openly afraid of being in a war zone and facing “Ukrainian nationalists”.

For example, local publications systematically publish statements of regional authorities refuting rumors about “the crossing of the border with Russia by the Armed Forces of Ukraine and the seizure of certain settlements”.

Meanwhile, residents of those districts and regions all the same leave their homes and move inland. Yes, almost half of the population left Belgorod. And the residents of Russia’s border villages are really at the forefront with the entry of the Ukrainian Defense Forces to the Ukrainian-Russian border. Especially when the commanders of the Russian troops deliberately deploys military units and weapons in settlements (including on Russian territory), exposing them to danger. Currently, the Russian media are already writing about it.

In the same way, Russia’s local media no longer hide the losses of Russian troops in Ukraine. While Moscow is still refusing to release new number of servicemen killed, regional media outlets publish obituaries every day. And their calculations completely coincide with the information provided by the General Staff of the Armed Forces of Ukraine.

Given these circumstances, it is not surprising that Russian youth are trying to avoid serving in the army in all possible ways. From banal running away from places of residence to other regions of the country, to setting on fire military registration and enlistment offices. Not only regional but also central publications and television are no longer hiding this.

The recognition by the Russian media of the aggravation of economic problems in the country as a result of Western sanctions is also indicative. And again, this is quite understandable. They already affect the vast majority of Russians: from oligarchs to ordinary citizens. For the former, it is the loss of access to foreign markets, loans, investments, technologies and high-tech products. And in the future they will also have an embargo on Russian oil and gas imports. For the latter — rising prices for basic consumer goods, unemployment, devaluation of wages and pensions.

Comments on articles in the electronic media and posts by Russian bloggers are becoming even more outspoken. An example of this is the assessment by Rostov-on-Don residents of local media materials dedicated to the May 9 parade. At least a third of them were sharply critical of the letter “Z” on Russian military vehicles, which passed along the main street of the city. The letter was literally called “shameful” — as evidence of Russia’s war against Ukraine and the failures of Russian troops on Ukrainian territory.

Moscow’s decision to refuse to hold air parades due to allegedly bad weather was also criticized. The real reason for this was the involvement of Russian aircrafts in the war against Ukraine and the significant losses of aircrafts and helicopters. At the same time, the bombing of the Azovstal plant in Mariupol by Russian bombers, which flew over Rostov-on-Don every day, including on Victory Day, was mentioned in a rather negative context.

Such estimates were significantly exacerbated after the Armed Forces of Ukraine’s destruction of the water crossings and almost two battalion-tactical groups of Russian troops near the village of Bilohorivka in Luhansk region on May 9–11, 2022. Thus, Russian military bloggers directly accused the commanders of the Russian troops of “incompetence and actual commission of a crime that requires appropriate punishment”. But then, the Federal Assembly (parliament) of Russia is already starting to talk openly about it, let alone the bloggers.

In general, these circumstances allow us to conclude that the internal situation in Russia is gradually deteriorating due to its attack on Ukraine and, especially, the failure of Russian troops on Ukrainian territory. In this regard, the following key trends can be noted:

By the way, all of these trends were characteristic of the former Soviet Union on the eve of its collapse. Similarly to the present, they included: deterioration of the economy of the USSR (including through Western sanctions); spread of public discontent in the war in Afghanistan; loss of total control over the media by the then ruling Communist Party; a split in the country’s leadership. The result was the collapse of the Soviet Union, which obviously is in store for today’s Russia.