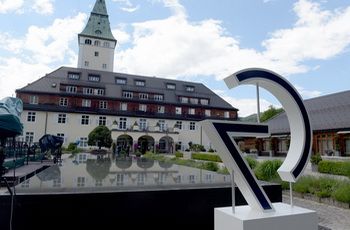 We already wrote about the strategic goals of Putin’s war against Ukraine, which include restructuring the existing world order system based on Russian interests. In this way, the Kremlin is trying to turn Russia into a leading center of global power with its own sphere of exclusive influence, a dominant role in the development of world processes, and the right to dictate its will to other countries. Instead, the attack on Ukraine only deepened Russia’s international isolation as an aggressor and occupier.

Moscow’s inability to quickly achieve its goals in relation to an obviously weaker enemy clearly testifies to its inability to realistically confront the US/NATO in a conventional war. All this determines the West’s current attitude to Russia, which was demonstrated during the recent summit of the Group of Seven (G7) in Bavaria. And now Moscow is waiting for the summit of the Group of Twenty (G20) in order to at least somehow correct the situation. Although, it is unlikely that it will succeed.

There is no need to recount the results of the G7 summit. They are widely known. Especially since some time has already passed since the end of the meeting. However, the progress and results of the summit allow us to confirm and supplement a number of geopolitical conclusions that were made based on previous events, and allow us to better understand the positions of our partners.

Firstly, the collective West maintains the unity and steadfastness of its positions regarding the protection of democracy in the world and opposition to totalitarian regimes, despite threats from them and the complication of own economic problems due to the retroactive effect of sanctions.

Secondly, according to the leaders of Western countries, the main danger to the world is the aggressive neo-imperial policy of Moscow, as evidenced by its attack on Ukraine. Thus, Russia’s war against Ukraine has become an event of global significance and has a negative impact on all vital spheres of existence of the world community. First of all, this concerns the emergence of critical threats to global security, the development of the world economy, the operation of the international energy system, the world’s food needs and ecology. Therefore, such actions cannot go unanswered, as they would inevitably lead to the disruption of the entire world order and create a dangerous precedent that can be used by other dictatorial regimes.

Thirdly, Ukraine remains extremely important for the West as a symbol of the struggle for democracy against totalitarianism, an advanced bastion at the edge of Russian aggression and a de facto “shield” of Europe that protects it from the danger of Russia’s military invasion from the East. Therefore, the defeat of Ukraine would also mean the defeat of the entire free and democratic world, and would also put Europe at risk of a direct attack from Moscow.

Fourthly, taking into account the above-mentioned circumstances, the West will continue a firm policy of containing Russia by successively increasing sanctions and increasing the amount of aid to Ukraine. This is of fundamental importance for the West as the main means of protecting its civilizational values.

Fifthly, in the conditions of the escalation of the confrontation with Russia, which, in fact, reaches the level of direct confrontation between the parties, the USA, NATO and the EU will strengthen measures to ensure their own security in all directions.

The stated positions found practical implementation in the decisions and political statements of the participants of the Group of Seven summit.

For example, a new package of sanctions against Russia was discussed and adopted for implementation. The sanctions include additional restrictions on the supply of radio-electronics and other components for Russia’s military enterprises, an increase in customs duties on Russian export goods, as well as an expansion of the list of sanctioned persons and entities.

The US initiative to help lower global energy prices as a means of depriving Russia of its income was approved. By the way, at one time, this is how the USA undermined the economy of the USSR, which led to its collapse. In addition, the United States announced the introduction of a number of unilateral sanctions against Russia, in particular, it prohibited imports of Russian gold.

The leaders of the G7 countries confirmed their full support for Ukraine, which was done both in their personal statements and in a joint communiqué. The summit participants agreed on the need to increase the supply of heavy weapons to Ukraine and provide it with macroeconomic assistance.

In this regard, let us recall the US plans to transfer medium-range air defense systems to our country, as well as Germany’s intentions to continue the supply of artillery systems and other weapons for the needs of the Ukrainian defense forces.

Of great importance is the initiative of Germany regarding the development and implementation of an analogue of the Marshall Plan for the post-war reconstruction of our country. An agreement was also reached regarding the allocation of additional funds received from the increase in customs duties on Russian export goods to the needs of Ukraine. As a result, Russia will actually finance Ukraine with its foreign trade.

Special attention of the summit participants was paid to increasing the security of Western countries in response to Russia’s transition to open aggressive policy. To this end, it is envisaged to reduce Europe’s dependence on Russian energy as much as possible. Besides, the US intends to strengthen its military presence in Europe. This issue is considered in more detail during the NATO summit in Madrid, where all members of the Group of Seven arrived.

According to many politicians and experts, the given approaches of Western countries and international organizations, which are supported by their practical actions, create prerequisites for a turning point in the war in favor of Ukraine. Evidence of this is Russia’s increasingly obvious inability to continue active hostilities on a wide front.

To date, Moscow has already brought to the Donbas almost all of its combat-ready troops formed from units of six combined arms armies, but it cannot achieve decisive success. Moreover, Russia is forced to carry out covert mobilization, and to use obsolete military equipment from storages.

Instead, with the help of Western partners, Ukraine is increasing its military capabilities, both defensive and offensive. Currently, this is already reflected in the course of hostilities. Manifestations of this tendency are an increase in the share of Russian missiles that are destroyed by the Ukrainian air defense, as well as an increase in the effectiveness of hitting the enemy’s military facilities located in its rear.

First of all, the strikes are aimed at headquarters, ammunition depots, and concentrations of enemy personnel and military equipment. Such targets are of particular importance from the point of view of disrupting the command and communication system of the Russian troops, depriving them of their missile and artillery means for conducting hostilities, as well as inflicting maximum losses on them.

And this is just the beginning. After Ukraine receives a sufficient number of weapons and accumulates forces, it can launch a full-scale counteroffensive and liberate its territories.

Under such circumstances, Russia is trying to compensate for its gradual loss of initiative at the front, to intimidate the Ukrainian population and force the leadership of our country to make concessions by launching missile and terrorist attacks on peaceful settlements of Ukraine. However, this only motivates defenders of Ukraine to increase resistance to Russia and finally undermines its authority on the international arena. Although, it already lost such an authority a long time ago.

Therefore, the Kremlin’s hopes to change the situation with the help of the participation of V. Putin or some other high-ranking Russian official in the Group of Twenty summit in November 2022 in Indonesia seem quite strange. Perhaps, due to the ongoing conflict with reality, the Russian ruling elite expects to destroy Ukraine by then and put the West in front of this “fact”. And then talk to it from a position of force.

The current situation at the front proves the unreality of such hopes. Therefore, the only thing Moscow can hope for is a demonstration that Russia still remains in the “club” of the world’s leading states, which the G20 is. Although, it is simply ridiculous and can deceive only Russians, zombified by Russian propaganda.