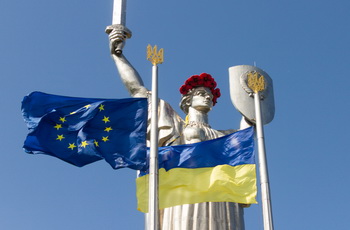 A Decisive Step on the Path to Europe

In June 2022, the most decisive event in the history of Ukraine after its independence was the decision of the EU leaders to grant our country the status of a candidate for membership in the European Union. This confirmed Ukraine’s European choice and opened the way for its full integration into Europe. At this, the death blow was struck on Moscow’s hopes to return Ukraine to its sphere of influence. Moreover, Russia has in fact entered into direct confrontation not only with Ukraine but also with the entire Western world. Of course, we are still far from becoming a full member of the EU. This is a complex and long process. And we still have a lot to do. However, a decisive step for Ukraine has already been taken.

From the very beginning of the proclamation of its independence in 1991, Ukraine embarked on a course of European and democratic development of the country with the ultimate goal of integration into Europe. Unfortunately, the implementation of such plans was complicated by a number of external and internal problems. Most of them are well known, but let’s remind them again.

To begin with, until recently, the main obstacle to Ukraine’s European path was the restrained attitude of the leading member states of the European Union, which considered it unprepared to join the EU. Besides, those countries did not want to exacerbate relations with Russia, which did not formally oppose Ukraine’s accession to the EU, but saw such prospects as a threat to its interests. The lack of unanimous support for the country’s European course in the Ukrainian society was also taken into account. That is why the EU leaders kept refraining from providing clear guarantees to Ukraine about its European future.

However, this in no way prevented the European Union from developing multifaceted cooperation with Ukraine. The EU has consistently strengthened such cooperation even in the face of Russian aggression against our state. Moreover, Russia’s attack on Ukraine in 2014 became a catalyst for the process of European integration of our state.

As you know, in 2014 an association agreement was signed between Ukraine and the EU, which provided for the creation of a deep and comprehensive free trade area. The next important step was the signing in 2017 of an agreement on visa-free travel between Ukraine and the European Union. The implementation of these agreements has significantly intensified cooperation between the parties in the political, economic and humanitarian spheres. At this, the EU has become Ukraine’s main foreign trade partner. Financial assistance from the EU is also important for Ukraine.

However, before Russia launched a full-scale war against Ukraine in 2022, the European Union, for the same reasons as before, did not consider granting our country the status of a candidate for EU membership. Russia’s war again adjusted the relations between the EU and Ukraine. At present, granting such a status to Ukraine is a form of the European Union’s support for our state in its confrontation with Russia. At this, the unity and firmness of the EU’s position and Russia’s inability to persuade it to make any concessions that were previously made, including regarding Ukraine, are demonstrated.

So far, the status of a candidate for EU membership is for Ukraine mostly symbolic as evidence of the recognition of our country as part of the Western world. In addition, at the global level, the allegations of Russian propaganda about “Nazi Ukraine” are finally refuted. None of the Nazi countries would be invited to the European Union. On the contrary, it is Russia that looks like a Nazi country, having started a war against Ukraine and the entire civilized world.

At the same time, Ukraine gets a number of additional opportunities in terms of deepening cooperation with the European Union. In particular, this applies to: strengthening the European Commission’s support for the Ukrainian reforms; Ukraine’s right to participate in EU programs and initiatives; increasing the attractiveness of the Ukrainian economy for European business; extending to Ukraine a program of financial assistance to countries preparing for EU membership. Brussels will also invest in Ukraine’s post-war reconstruction, which will be seen as a contribution to the development of a potential member of the European Union, not a third country.

All this will contribute to the realization of Ukraine’s European prospects. However, first we need to restrain Russia and defeat it. And, by the end of this year, to fulfill the EU’s seven key requirements, which include: reforming the Constitutional Court, in line with Venice Commission recommendations; continuation of judicial reforms; strengthening the fight against corruption; adoption of the anti-money laundering legislation; implementation of the anti-oligarch law; empowering of an independent media regulator, harmonization of legislation on media services with European directives; completion of the reform of the legal framework for national minorities.

And all this must be done during the war with Russia, which will continue to do its best to prevent the European integration of our state. Including through its military destruction and liquidation of the Ukrainian nation. This is exactly what Moscow is trying to do now. And Russia, as always, shows a frankly cynical position and tries to hide its failures.

For example, as noted above, at first Russia allegedly agreed to Ukraine’s accession to the EU, although it created all possible obstacles to this. With the beginning of a full-scale war against Ukraine, the Russian ruling elite changed its position and opposed the European integration of our state. As you know, such changes were explained by Moscow by the fact that the countries of the European Union, which are also members of NATO, supply weapons to Ukraine, and therefore there is “no fundamental difference between these organizations”. Especially when the EU is developing its own military capability.

And so Russia again states that it has no objections to Ukraine’s accession to the European Union. What else can it do when such prospects of our state have become quite real. In turn, this was an outright diplomatic defeat for Moscow, which it is trying to hide from the Russian population.

However, Russia is only part of our problems, albeit the worst of them. As the experience of other countries shows, resolving all the necessary issues to become a full member of the EU will take a long time, namely many years or even decades. This concerns not only to reforms and ensuring Ukraine’s compliance with the criteria of the European Union, but also to achieving political compromises with all members of the EU.

According to EU rules, all fundamental decisions on Ukraine’s further European integration must be taken unanimously by EU members. At this, some of them remain concerned about the possibility of complicating the situation in the European Union with Ukraine’s accession to it, or have some contradictions with our state. Therefore, by agreeing to grant Ukraine the status of a candidate for EU membership, they can deliberately delay the process of our European integration, or use it as a means of influencing it.

A similar situation has now developed around the countries of the Western Balkans. The same can be said for Türkiye, which has been a candidate for EU membership since 1999, but has never joined. However, let us hope that all this will not happen to Ukraine. Because in the current situation of Ukraine, which, in fact, plays the role of “eastern shield” of Europe from the Russian invasion, the double attitude to it on the part of the European Union will mean undermining its own principles.

Obviously, this is understood in the EU as well. According to the conclusions of the European Council, which were adopted following the meeting on June 23, 2022, the European Union remains firmly committed to providing further military support to help Ukraine exercise its inherent right of self-defense against Russian aggression and defend its territorial integrity and sovereignty. In addition, the leaders of a number of European countries have already taken initiatives to apply a simplified procedure for Ukraine’s accession to the EU.

In general, it will depend only on Ukraine whether it will be able to implement its European choice. Especially since it has already paid for it with blood.