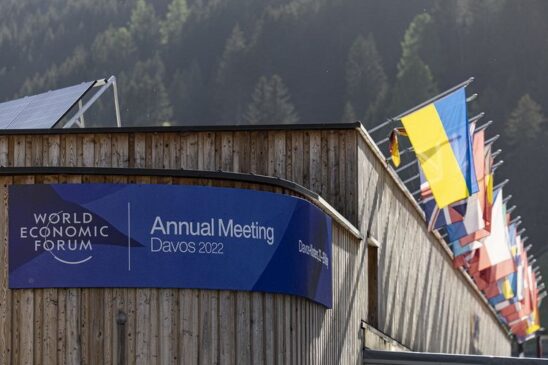 The situation around Ukraine in the conditions of Russia’s continuation of a full-scale war against our state remains in the center of attention of the world community. Thus, the mentioned theme became the main topic of the summit of World Economic Forum in Davos on May 22–26, 2022. Given the focus of the summit, as well as a number of other factors, it differed significantly from similar events in previous years. However, most of these changes are more or less related to Russia’s attack on Ukraine. Based on this, we would like to estimate the features and results of the summit through the prism of Ukrainian interests.

As you know, the World Economic Forum (WEF) is one of the most authoritative international organizations that studies the trends of the world economy, as well as global economic problems and ways to resolve them. The WEF’s main events are the annual summits, which are traditionally held in Davos, Switzerland, in late January and early February.

Due to the coronavirus pandemic, in 2021 the summit was held by video conference. And in 2022, due to an outbreak of COVID-strain “Omicron”, it was postponed to May. Previously, it was planned to discuss the most important issues that have a negative impact on the development of the world economy, namely — the consequences of such processes and events as: escalation of the confrontation between the West and Russia; escalating conflicts between the United States, Europe and China; protectionist policies of individual countries; pandemic of coronavirus and its new strains; global climate change.

However, as a result of a full-scale Russian attack on Ukraine, these problems have receded into the background. The main topic of the summit was to consider the situation around Ukraine and identify opportunities to help it in the war with Russia. According to most unbiased estimates, this summit was the most relevant in the history of the WEF. At this, the full support of Ukraine was demonstrated and the actions of Russia, which was not invited to the summit for the first time since the collapse of the USSR, were strongly condemned.

Given the wartime and the lack of opportunities for the majority of the audience to pay attention to large articles, we will start immediately with the conclusions, which will then be supported by facts. So, the course and results of the Davos 2022 summit have shown us as follows:

The unity of the positions of the Western world and all civilized countries on support for Ukraine and the need to increase pressure on Russia was demonstrated in the introductory speech of the Founder and Executive Chairman of the World Economic Forum — German economist Klaus Schwab, who opened the meeting. In turn, her tone was set by the video address of the President of Ukraine Volodymyr Zelenskyi. In his speech, the Ukrainian leader estimated Russia’s actions as a manifestation of brute force to change the world in his favor. According to V. Zelenskyi, if Moscow succeeds in achieving its goals, it will inspire other tyrannies and completely destroy the modern world, which will turn into a “very large collection of war crimes”. 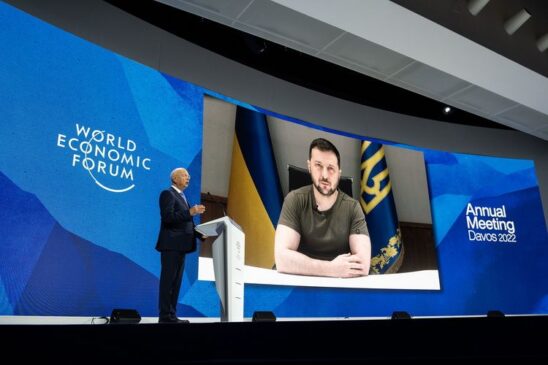 Based on such perspectives, Russia’s war against Ukraine has been called by V. Zelenskyi another turning point in the development of world history, which requires concrete steps by the world’s leading countries and international organizations. In this regard, the President of Ukraine stressed the need to maximize sanctions against Russia, including to impose an embargo on Russian oil imports.

However, as V. Zelenskyi pointed out, Ukraine managed to stop the world’s second army, albeit at the cost of heavy fighting and thousands of lives. Therefore, V. Zelenskyi reaffirmed Ukraine’s need for Western weapons, including air defense, which will drive the aggressor out of Ukrainian territory and ensure security of the civilian population.

V.  Zelenskyi paid special attention to the post-war reconstruction of Ukraine. The head of the Ukrainian state called on the world to set a precedent, “which will show everyone who dreams of destroying the life of a neighbor that the war doesn’t bring the expected result”.

V.  Zelenskyi’s address was supplemented by speeches by representatives of the Ukrainian government, politicians and businessmen during other events organized by Ukraine. Including: sessions Spirit of Resilience: Ukrainian Voices; sessions of the Mayor of Kyiv V. Klitschko and discussions with the participation of the Klitschko brothers; a session on responding to the humanitarian crisis in Ukraine; communication of the participants of the Davos 2022 meeting with the Minister of Foreign Affairs of Ukraine D. Kuleba and his press conference; International Diia Summit Brave Ukraine; works of the Ukrainian House and Davos Ukrainian Breakfast.

A series of speeches were made during the presentation of the Russian War Crimes House, which opened at the traditional Russia House in Davos (another humiliation for Moscow).

The Ukrainian participants in the above-mentioned events provided confirmation of Russia’s war crimes, specified the situation in Ukraine in various areas, and clarified the needs of our state in the military and economic spheres. The conclusion was drawn about Ukraine’s readiness and ability to continue the struggle against the aggressor until the complete liberation of Ukrainian territories, as well as the inevitability of victory over Putin’s dictatorship as the main threat to the world.

In this regard, the speakers stressed the role of Ukraine as one of the main factors deterring Moscow’s aggression. This justified the need to strengthen Ukraine’s external support, which will allow to avoid a new world war. At the same time, the members of the Ukrainian delegation once again drew the attention of Western countries to the impossibility of any concessions in favor of Russia or compromises with it, as this only encourages it to further aggressive actions.

A number of separate sessions of the Davos 2022 summit were also devoted to the Ukrainian issue. In different formats in the context of the situation around Ukraine, the following were discussed: the new Cold War and the security problems of Europe; the possibility of a global food crisis; threats to the energy supply of European countries; EU and NATO policy; consequences of new migration flows.

Representatives of the leaderships of the EU, NATO, Western and other countries, as well as politicians and military experts took part in the discussion on military-political and economic issues related to Russia’s war against Ukraine.

For example, President of the European Commission Ursula von der Leyen agreed with Zelenskyi’s assessment of Russia’s aggression, which created critical threats not only to Ukraine but also to Europe and the world. In this regard, she called on the world community to join forces to counter Russian aggression. According to U. von der Leyen, the European Union will continue to support Ukraine, in particular in the allocation of a 10 billion package of macroeconomic assistance. At the same time, the EU will increase pressure on Russia by imposing new sanctions. The most powerful of these should be Europe’s rejection of Russian energy carriers.

U. von der Leyen’s position was fully supported by President of the European Parliament, Roberta Metsola: “There is no time for face saving of Putin, no time for appeasement”.

In his turn, NATO Secretary General J. Stoltenberg highlighted Putin’s strategic mistake, which was Russia’s attack on Ukraine. According to him, Moscow has not been able to achieve any strategic goals and has only faced new, critical problems, both economic and security.

Evidence of this was the complete failure of Russia’s attempts to curb NATO’s enlargement process or even return it to its 1997 borders. Instead, Russia faced the prospect of the Alliance’s immediate coming to its northeastern border. Besides, Russian troops failed to capture Kyiv, were forced to leave northern Ukraine, were pushed back by the Ukrainian army from Kharkiv region, and had little success in the Donbas.

German Chancellor Olaf Scholz also supported Ukraine and condemned Russia’s actions. Contrary to perceptions of Berlin’s alleged pro-Russian policy, the German Chancellor made it clear that “must not win this war”. O. Scholz called on Putin’s allies and partners to “make it clear to Putin that there will be no dictated peace. Ukraine will not accept that and neither will we”. Separately, the head of the German government pointed out that due to Russia’s war against Ukraine, the German army is supplying weapons to the war zone for the first time.

Similar views were expressed by military experts. One of the most illustrative was the speech of former US naval intelligence officer Malcolm Nance, who is currently fighting for Ukraine as part of the International Legion. He identified international aspects that contribute to strengthening Ukraine’s defense capabilities and its future victory over Russia. Among them were the supply of modern weapons by Western partners, as well as the voluntary participation of foreign citizens with military experience in the Defense Forces of Ukraine. And they are not mercenaries, because they left work at home, where they earned much more money. Based on this, M. Nance noted the importance of resolving the issue of transfer of MLRS, Patriot systems and jet fighters to Ukraine as soon as possible.

Most of the other critical global issues were also discussed in the context of the consequences of Russia’s war against Ukraine. Thus, the summit participants agreed on the actual emergence of a new Cold War in the world. This war is much more complicated than the previous one, as it involves not only the confrontation between the West and Russia, but also the escalation of conflicts between the United States, Europe and China.

At this, all warring parties are actively increasing their military capabilities, including nuclear weapons. According to experts, this threatens the outbreak of World War III, which could be the result of Russia’s attack on Ukraine. Especially since Moscow openly threatens Ukraine’s partners, including with the use of nuclear weapons.

According to the participants of the Davos 2022 summit, this situation blocks the development of globalization processes and even leads to their regression. Manifestations of this trend include the imposition of reciprocal sanctions by hostile parties, the severance of trade, economic, banking, financial, political and cultural ties, and the imposition of restrictions on the dissemination of information. All this slows down the growth of the world economy and reduces the level of human well-being.

Russia’s seizure or blockade of Ukrainian ports has also been cited as a significant problem, creating significant barriers to Ukraine’s grain export to the world markets. As a result, there is a real danger of a humanitarian catastrophe in a number of countries in the Middle East and Africa. So far, the threat of famine has already caused an increase in the flow of refugees to Europe, which creates the basis for another migration crisis in the EU. In view of this, the summit pointed out the need to resolve this problem as soon as possible by increasing financial assistance to poor countries and finding ways to unblock Ukrainian ports.

Besides, the threat of environmental catastrophes in the event of the destruction of chemical and other dangerous enterprises was named among the problematic aspects of Russia’s full-scale attack on Ukraine. This was seen as another reason for the need to increase international pressure on Russia to end its war against Ukraine.

Unfortunately, on the sidelines of the summit, some politicians and big business representatives called for the expediency of Ukraine’s concessions in favor of Moscow and reaching certain compromises in the interests of restoring economic ties between European countries and Russia. However, such views were not supported and did not spread.