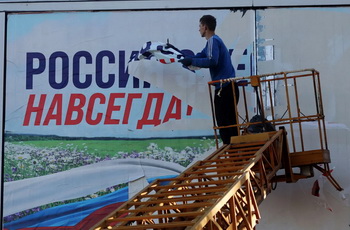 In November 2022, Ukrainian troops liberated the city of Kherson together with the right-bank part of Kherson region, which became one of the greatest and strategically most important successes of Ukraine. This significantly improved the disposition of the Armed Forces of Ukraine on the front line; inflicted significant losses on the Russian army and further undermined the morale of its personnel; also became a catalyst for the final political failure of Putin’s regime. Such consequences radically affect the Russia’s war against Ukraine and open up even more significant prospects. However, the euphoria is still premature. We still have a lot of work to do to liberate our territories occupied by Moscow. And after that, we will move on to the liberation of the Russian Federation itself from Putin’s rascals. At least, there are people already waiting for us in Bryansk, Kursk, Belgorod and Rostov regions. And maybe also in Taganrog, which is also a Ukrainian city.

It is necessary to remind once again what started Russia’s war against Ukraine. As we all know, thanks to the operational suddenness of the attack, the Russian troops managed to capture the north, east and part of the south of our country. And what is observed at the moment? Most of the Ukrainian territories have already been liberated or are in the process of being liberated. The war itself spread to the regions of Russia adjacent to Ukraine. At the same time, the entire Putin’s regime began to collapse. The situation in the south of Ukraine became the quintessence of the process. This allows to draw some conclusions.

Firstly, the war against Ukraine was finally lost by Russia. This became clear in March-April 2022, and was finally confirmed after Putin’s army in panic fled the right-bank part of Kherson region. According to the Russian Defense Minister Sergei Shoigu, 30,000 people and 3,500 pieces of military equipment of the Russian army were evacuated from the right bank of the Dnipro without loss.

Maybe someone in Russia will believe these words. In our country and in the whole world — by no means. On the right bank of the Dnipro, the command of the Russian Armed Forces left about 10,000 of its subordinates. And they surrender en masse. Not to mention military equipment. I’ll just say that most of it became our trophies. Or scrap metal at former Russian positions. This is confirmed by videos from de-occupied regions of our country. Just look at what the Russians left behind in the famous Chornobayivka.

Secondly, the Ukrainian troops significantly improved their positions. The enemy has been driven beyond the Dnipro. From now on, any attack by the enemy on Mykolaiv and Odesa is out of the question. Under no circumstances will the Rashists be able to cross the Dnipro river without bridges and resistance from the Armed Forces of Ukraine, as was the case in the spring of 2022 near Kherson. Regardless of what Russian propagandists say, the Russian army does not have sufficient forces and means for this. Especially since we can, as it turns out, effectively destroy all their river crossings.

Our situation is completely different. We can leave certain covering forces on the right bank of the Dnipro, and move all others to the left bank using the bridges higher up the river. This takes some time to regroup troops, but is not a fundamental problem.

Further action plans of the Ukrainian troops are the prerogative of our General Staff, and we have no right to disclose or interfere with them. However, what will happen next is already clear. What American Institute for the Study of War (ISW) says. According to its forecast, after a certain operational pause, Ukrainian troops can launch a new offensive in two directions, namely: along the left bank of the Dnipro and towards Melitopol.

This will create prerequisites for the liberation of the left-bank part of Kherson region, the southern part of Zaporizhzhia region, the return to our control of the coast of the Sea of Azov, as well as the elimination of the land corridor from Russia to Crimea.

Currently, Ukraine already can inflict fire damage along the main highways from Crimea to the left-bank part of Kherson region, which is still occupied by the Russians. After the explosion on the Crimean bridge, those roads remain the main connections of the peninsula with Russia. We have also significantly improved our ability to destroy the enemy’s military facilities on the left bank of Ukraine. Now the Russian-occupied Kakhovka, Nova Kakhovka and the Chaplinka airfield, which has become a “new Chornobayivka”, are already under direct fire from barrel artillery and MLRS.

Come the need, Ukrainian troops can also move from Kherson to the Donbas, where Russia is still trying to go on the offensive. But then what an offensive it is: separate platoons with the support of three or four tanks and BMP on several directions. That is why Moscow has not achieved any success near Donetsk for more than four months and is not able to capture Bakhmut, Avdiivka, Maryinka (ordinary district centers!). According to some estimates, Russia may send there its military units withdrawn from the right-bank part of Kherson region. But after the defeat near Kherson, they cannot hope for any success. Those troops are demoralized, have lost their military equipment and are hardly capable of active action.

Thirdly, the long-term rule of Putin’s regime has suffered a disaster — it is falling apart right before our eyes. It may still be far from its final fall, but the liberation of Kherson completely destroyed the ideological basis of Putin’s power, which was based on the ideas of Russian-Soviet revanchism. They, those ideas, have long been known to everyone and include the reincarnation of the Russian Empire in the form of a likeness of the former USSR, as well as the resumption of confrontation with the West.

The Kremlin’s imperial plans have been destroyed. Expansion has been stopped. And the confrontation with the West has turned Russia into an international pariah-state. In particular, this was shown by the “Group of Twenty”(G20) summit on the island of Bali, which, de facto, took place without the participation of the Russian Federation. Instead of himself, Vladimir Putin sent there the Minister of Foreign Affairs Sergei Lavrov, who was also subjected to obstruction there. No one even wanted to take a picture with him. Thus, G20 turned into G19, which became another international humiliation for Moscow after its expulsion from the Group of Eight in 2014.

The Russians, with their great-power chauvinistic mentality, which is further fueled by Putin’s regime, do not forgive such things. Most of them are indifferent to Russia’s participation in various international organizations. But by no means to the loss of territories that they consider “theirs”. This is already being used by Russian political forces of a nationalist orientation.

For example, Putin’s agreement to surrender the city of Kherson, as the only regional center of Ukraine captured by Russia, was harshly criticized by Russian nationalists, including on their central TV channels. A manifestation of this was the criticisms on television from the Russian “philosopher” — ideologue of the “Russian world” Aleksandr Dugin and the Russian propagandist Vladimir Solovyov. For them, Vladimir Putin is no longer an authority.

Supporters of the “Russian world” who still remain in Ukraine also stopped trusting him. They believed in Moscow’s slogans “Russia has come forever”, and then with bitter tears in their eyes, they were forced to urgently flee the city of Kherson. Local residents greeted the Ukrainian military with flowers and tears of joy. Who will now believe Moscow in other temporarily occupied territories of our country, from where the collaborators will also have to run away (what they are already doing)?

All this, of course, does not particularly bother the Kremlin. The most terrible thing for Putin is that he is no longer an authority for the Russian oligarchs, who at one time put him in the chair of the President of Russia, and are now starting to turn away from him. And even more so — they started to create their own alternative armies, apparently intended to seize power.

The most powerful of those is the private military company “Wagner” headed by Yevgeny Prigozhin. In terms of numbers, its troops are already equal to all combat-capable units of ground forces of the regular Russian army, and may even exceed them.

Another alternative army is the armed formations of Ramzan Kadyrov, which, in fact, are nothing more than bandit groups. They can only rob civilians and be used as anti-retreat units.

The armed clashes have already begun between all these three “armies” for the redistribution of the property looted in Ukraine, as well as for access to Russia’s own military and other resources. Once again, I want to repeat the conclusion from one of my previous articles: such a country cannot win. Therefore, the victory will be ours.

However, we cannot underestimate the enemy. Russia is still strong, it can cause us significant damage. This is demonstrated by massive missile attacks on critically important facilities of the energy infrastructure of Ukraine on October 10 and November 15–17, 2022. But it won’t be able to break us. We survived the Mongol-Tatar invasion, genocide by Russian tsars and communists, including the Holodomor, as well as the invasion of German-fascist troops. We will withstand the war with the Rashists.