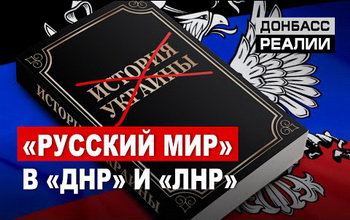 For at least the past 20 years, the Kremlin has consistently claimed that the so-called “Novorossiya” is part of Putin’s autocratic “Russian world” which is in fact a kind of totalitarian Stalinist terrorist “Soviet world” that killed tens of millions of Russians, Ukrainians, Belarusians, Azerbaijanis, Kazakhs and representatives of other peoples of the former USSR.

February 8, 2021, D. Peskov, a Spokesman for the Russian President, reiterated that “Ukraine is part of the Russian world and Moscow does not welcome Kyiv’s denying this belonging”. According to him, Moscow will use “soft power” to protect such a “world” in Ukraine. Tens of thousands of victims of Russian aggression, killed and maimed Ukrainian military and civilians, testify to its “softness”. Of course, the Russian people have also paid a terrible price for Putin’s criminal adventurism.

Once the same D. Peskov said that “Ukraine has gone beyond the “red lines” in relations with Russia”. Exactly. We have our own, “Ukrainian world”, which we are building for our children and grandchildren, and in which the majority of Ukrainians aspire to live. After the Revolution of Dignity and the almost 7-year Russian-Ukrainian war, we, Ukrainians, will never return to Putin’s Communist Horde stall. Virtually all post-Soviet republics are trying to break free from Putin’s “Russian world”.

For almost 7 years now, Ukraine has been facing the super-task of returning the territories occupied and annexed by Russia. Without the help of the world community, in particular the leading European countries — Germany and France, Poland, the EU and NATO, the United States, Canada, Australia and other countries, we will not be able to cope with this challenge. International sanctions against Russia and assistance in reforming and strengthening the Armed Forces of Ukraine play a significant role here. At this, the leadership of our state constantly calls on our allies and partners to toughen sanctions against Russia.