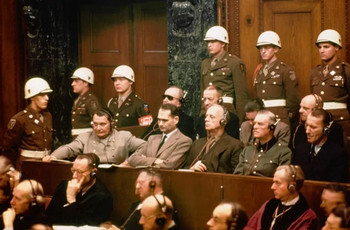 The Experience of the Punishments of the Nazi Regimes

We are all well aware of the crimes committed by the Russians in Ukraine. Almost all of us have seen their consequences with our own eyes or in media reports. And the majority of the world’s population has at least heard about them on the radio or, again, seen them on TV. The atrocities of the Russian attackers have already exceeded what the Tatar-Mongols, German-fascist invaders or Serbs did during the civil war in the territory of the former Yugoslavia. True, there could not be international courts during the time of the Tatar-Mongols, so their leaders escaped punishment. But the criminal leaders of Germany or the same ex-Yugoslavia were punished. And so will certainly be punished the ruling elite of today’s Russia. For which, as you know, the Hague Tribunal is already preparing. But now it is appropriate to remember what happened to their predecessors, who once appeared before the international court.

Let’s start with the Nuremberg Trials, known as the first ever full-scale trial of war criminals who were part of a group of former leaders of Nazi Germany that was defeated in World War II. 24 leaders of the National Socialist Party of Germany, the Imperial Cabinet of Ministers, the headquarters of the High Command of the Wehrmacht, as well as the Gestapo and SA assault units were prosecuted by the International Military Tribunal, consisting of representatives of the judicial bodies of the countries of the anti-Hitler coalition — the USA, the United Kingdom, France, and the USSR.

The indictment included four charges, including crimes against peace and humanity, war crimes (violations of the laws of war, which were defined by the Hague Conventions of 1899 and 1907) and conspiracy with the aim of seizing power. During the investigation, thousands of witnesses were heard, as well as photographic and film materials, other documents were studied, confirming the atrocities committed by the German-fascist invaders. All this concerned both the occupied territories of the former Soviet Union, primarily Ukraine and Belarus, and Europe.

Despite the Nazi leaders’ attempts to deny their crimes, or shift the responsibility for them to the higher leadership of Germany (who committed suicide or disappeared in an unknown direction), the accusations were fully proven. Thus, the facts of mass murder of prisoners of war and civilians, targeted destruction of peaceful settlements and the use of prohibited types of weapons had been confirmed.

The Nazis failed to persuade that they “knew nothing” about the concentration camps, gas chambers and crematoria, which were on an industrial scale. The term “genocide”, which clearly defined what constituted the deliberate destruction of entire nations, was introduced into the political lexicon…

And now let’s return to the recent history of the latest thirty years. In 2000s, the International Criminal Tribunal for the Former Yugoslavia indicted the country’s former President, Slobodan Milosevic, and four other high-ranking Yugoslav officials for committing war crimes in Kosovo in the spring of 1999. The charges were on five counts: murder, persecution on political, racial and religious grounds, deportation and violation of the rules of war.

Despite all attempts by Moscow to disrupt the international trial against Milosevic, as the main Russian ally in the Balkans, he was punished. In April 2001, Milosevic was arrested by the new Serbian government and transferred to the UN prison in The Hague. He died there in March 2006 from an alleged heart attack.

By the way, the war in Kosovo was provoked by Milosevic with the same goal as by Putin — in Chechnya. Exceptionally — to increase their own ratings among the population of their countries by “playing” on their pro-Nazi sentiments.

A little less “lucky” was the President, but in fact the dictator of Iraq, Saddam Hussein. He also organized mass murders of individual national and religious communities of his country. Including with the use of chemical weapons against Kurds and Shiites. After his power was overthrown by a military operation by the US and its allies in 2003, he was caught, arrested and executed by hanging. The majority of Iraqi citizens supported such an act. We can also note that unlike the Russian troops in Ukraine, the American troops in Iraq were actually welcomed by the local population as liberators.

International tribunals, and with them the corresponding sentences, are obviously foreseen for the regime of V. Putin. It is he, most likely, who will avoid this, because he will not live (if he is still alive) to it or will decide on some other suicidal act. Last month, if we believe the news reports, such an attempt was already made by D. Medvedev, the former Prime Minister, technical President, and now the Deputy Chairman of the Security Council of Russia. His behavior cannot be considered normal, but even in this state he is aware of the inevitability of a shameful punishment.

We do not know whether the Russian Minister of Defense S. Shoigu, the Chief of the General Staff V. Gerasimov, the Chief of the GRU of the General Staff I. Kostyukov, the Director of the FSB A. Bortnikov, the Head of the Foreign Ministry S. Lavrov and the Press Secretary of the Russian President D. Peskov will be punished. And with them — all Russian propagandists like Skabeeva or Solovyov. But if they manage to avoid the international tribunal, they could not escape from the long arms of their henchmen. This is evidenced by the experience of Russian military commanders from the highest to the middle ranks who fought in the Ukrainian Donbas in 2014–2015. Most of them have already died. Some were killed in car accidents, some apparently committed suicide or drowned in the sea, and some were liquidated in Syria. By the way, it was Syria who became the main “disposer” of inconvenient witnesses.

A military tribunal is no longer needed for most of Ukraine’s military traitors who sided with Russia in 2014 during its seizure of Crimea. They were thrown to the slaughter near Mariupol and Mykolaiv as part of the first echelons of Russian troops. Among them there were even those who managed to be retired from the Armed Forces of the Russian Federation, but were called up again in the spring of 2022 to ultimately, so to speak, enrich our Ukrainian black soil. The same awaits the collaborators-worshippers of Putin’s regime. Both, those who deliberately stayed in the occupied south-eastern territories of Ukraine, and those who were preparing to meet the Russian troops with flowers in our capital.