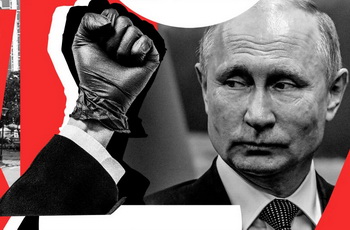 Professor of the National University of Kyiv-Mohyla Academy, Ambassador Extraordinary and Plenipotentiary of Ukraine

The massive international armed conflict in the center of Europe, caused by Russia’s aggression against Ukraine, may potentially escalate into World War III. To prevent this, the international community must unite in an anti-Putin coalition. The latter’s goal should include eliminating this criminal regime, bringing Russia to international legal responsibility, and creating reliable guarantees of international security for all.

Russia, ruled by the Putin regime, has challenged the entire international community. It commits barbaric international crimes against states and peoples, it strives to ruin international law and order based on the UN Charter, and it violates global peace and security. With the KGB colonel Putin’s advent to power in Russia, the façade of pseudo-democratic public institutions conceals the dictatorship of a Nazi-styled totalitarian racist regime. Its key elements include an extensive punitive apparatus, powerful propaganda machine, and a large army.

In repelling Russian aggression, Ukraine is fighting for its very existence and shields, at the same time, vital geopolitical interests of the Euro-Atlantic community, democracies in other regions of the world, and the entire international community.

International opposition to Russia commenced almost immediately after February 20, 2014, with the start of Russia’s armed aggression against Ukraine. By condemning Russia’ actions as aggression, by introducing international sanctions against the aggressor, and by commencing military, economic, and humanitarian support of Ukraine the process of anti-Putin coalition formation effectively began.

After the large-scale invasion by Russia on February 24, 2022, and the shock caused by its barbaric brutality against Ukraine’s civilian population, that process has accelerated significantly. The leading role in uniting the whole free world was played by the USA and Great Britain. The turning point marked the meeting of defense ministers of 43 world countries at the Ramstein military base. The land-lease law to protect democracy in Ukraine became an important event, drawing clear parallels between Putin and Hitler.

Pro-active and efficient support of Ukraine by the United States of America and Great Britain makes them the key players in anti-Putin coalition.

The overriding objective for Ukrainian diplomacy should be fully focused cooperation with participants of the Consultative Group founded at Ramstein with the purpose of formally transforming it into the wide anti-Putin coalition, paralleling the anti-Hitler coalition during World War II.

Of utmost importance is a clear statement of tasks and goals of the coalition. They should include the following:

Making Russia responsible should be accompanied by total dismantling of the Putin’s regime. This is the only way to bring back peace, justice, and international law and order. The Ukrainian-Russian post-war settlement is fundamentally unacceptable and impossible under the conditions of Putin’s regime preservation and concessions to Russia based on its illegitimate demands. Such a settlement will encourage Russia to start a new war, engaging directly or indirectly other countries as well.

To prevent this, the peace agreement between Ukraine and Russia must be signed by the countries of anti-Putin coalition, and envisage international legal responsibility of Russia for the crime of aggression committed not only against Ukraine at the time being, but against the Republic of Moldova, the Chechen Republic of Ichkeria, and Georgia in the past.

Modern Russia is a systemic evil that ought to be punished in a systemic and comprehensive way. Individual criminal responsibility for all international crimes committed during all wars of aggression that Russia waged after the collapse of the Soviet Union must be imposed on Russia’s military and political leadership.

The possibility of organizing a Specialized International Military Tribunal is being discussed today since certain jurisdictional restrictions in some provisions of the Rome Statute of the existing International Criminal Court make it impossible to prosecute the military and political leadership of Russia for the crime of aggression. At the same time, the Rome Statute envisages the possibility of its provisions application to punish for crimes of genocide, military crimes, and crimes against humanity. Still, the above only applies to crimes committed after July 1, 2002 — the day when the Rome Statute became effective. Hence, the International Criminal Court mechanism can be employed today to punish, only partially, Putin’s military criminals. At the same time, it should be understood that criminal punishment of the top military and political leadership of Russia can only take place where the responsibility of that state, as such, is established. Therefore, the priority objective for the anti-Putin coalition must be to bring the Russian state to international legal responsibility.

In line with modern international law, bringing a state to responsibility for the acts of aggression, military crimes, and crimes against humanity have no statute of limitations.

Apart from the above, the aggressor-state must also bear responsibility not only to individual countries who became victims of aggression, but to the entire international community. All states that implement their right to individual and collective self-defense against aggression in line with Article51 of the UN Charter enjoy the right to demand that the aggressor-state compensates all losses and damages incurred during the period that the aggression was being repelled. This means compensation of damages suffered by the Republic of Moldova, the Chechen Republic of Ichkeria, Georgia, and Ukraine, as well as reimbursement of all losses incurred by states of anti-Putin coalition. These mentioned losses ought to include:

1) funds that they spent for military, financial, and humanitarian support of Ukraine, including funds to assist Ukrainian refugees abroad; and

Currently, there are discussions on the need to attract funds and resources of the European Union, or to engage in a project like the Marshall Plan for the post-war economic rehabilitation of Ukraine. Naturally, such an approach is worth deliberating, but Ukraine must demand, in the first instance, compensation for all its economic losses and implementation of national economy revival plans from Russia as the aggressor-state.

Particulars of responsibility for the crime of aggression also provide the opportunity that it is possible to limit the sovereignty and international and legal status of the aggressor-state, as well as to strip it of some of its territory, especially in cases when such territory was illegally seized by the aggressor-state in the past.

In case of Russia the following steps must be taken: propaganda system of the “Rashist” ideology must be dismantled, and this ideology itself must be banned; punitive agencies must be reformed, first and foremost, the FSB; conditions ought to be created to ensure free self-determination of the peoples and nations that fell under the yoke of the Kremlin imperialism and are still forcibly kept as part and parcel of Russia; territories of other countries that are under Russia’s occupation must be de-occupied.

Russia must be deprived of its status of the permanent UN Security Council member.

All weapons prohibited by international humanitarian law must be removed from Russia and destroyed, and a ban on equipping Russian armed forces with offensive weapons must be imposed.

Alongside with Russia, the Republic of Belarus must be brought to international legal responsibility. Considering the fact that the armed forces of the Republic of Belarus had no direct participation in the assault on Ukraine, and that the permit to deploy the Russian armed forces in the territory of Belarus was greenlighted by the administration headed by the self-proclaimed president Oleksander Lukashenko, the responsibility to be borne by the Belarusian state may be limited to criminal penalties only against O. Lukashenko and certain loyal to him representatives of the top Belarusian military and political leadership. This clique actually performs the functions of an occupation administration fully controlled by the Putin’s Russia.

The Anti-Putin coalition should become the retaliatory strike of the international community for Russia’s criminal behavior and its systematic, constant and gross destruction of international law and order, and violations of peace and security. This criminal behavior poses risks of future serious encroachments on sovereignty and territorial integrity of individual states. There is no rational alternative but to complete the formation of such a coalition, as the Putin’s regime dreams not only to continue its war against Ukraine and refuses to reinstate its territorial integrity, but remains incapable, in principle, of a civilized and fair post-war settlement. The Putin’s regime manifests itself as a comprehensive threat to the civilized democratic world, peace and security of mankind as a whole.

The creation of the Anti-Putin coalition and attainment of all its goals and objectives is the historic mission of all freedom-loving states of the world. The successful implementation of this mission will restore and secure a just peace, strengthen rules-based international order, and thus create durable security guarantees for all.

And finally, the last but not the least, about the possibility of the Kremlin resorting to a retaliatory nuclear strike. This is the key argument of those who wish to “appease” Putin.

The Kremlin is well aware of the absolute superiority of the West over Russia in military, economic, and technological spheres, in human resources, in strategic planning, and in geopolitical influence. Also, Moscow clearly understands that it will definitely lose in a military confrontation with the NATO. Regardless, the Kremlin is consciously implementing nuclear blackmail. If Moscow succeeds in so intimidating the West, this can become a dangerous precedent case for other nuclear states to resort to similar blackmail. This would have destructive repercussions for the global law and order. Additionally, non-nuclear states will be prompted to obtain nuclear capacity precisely as a defense against such blackmail. In sum, nuclear non-proliferation will be a concept for a museum.

The NATO leadership ought to warm Moscow openly, immediately and unequivocally about the very concrete negative consequences for Russia in case it resorts to use its nuclear weapons first.

Pleading with Putin for real peace will not work. Russia can only be compelled into a just peace.