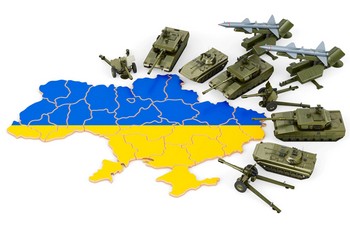 On the eve of May 9, 2022, many experts were waiting for V. Putin’s decision to impose a state of emergency in Russia and declare a general mobilization in the country. However, this did not happen. According to the Kremlin, “there is no need for such steps at the moment, as a special operation in Ukraine is going according to plan”. We see for ourselves how it “is going”, and everyone has long been accustomed to the Kremlin’s lies. However, we would like to look again at what is happening on the front lines, clarify changes in the situation, as well as make some predictions for the future.

Immediately after May 9, 2022, the aggressor’s media once again announced the “Russian troops’ reaching the eastern borders of Donetsk and Luhansk regions”. However, in reality, this is just a wishful thinking again.

Russian troops did advance in some areas of the Donbas, but in others they were defeated. As, for example, happened when the occupiers tried to break through near Bilohorivka in order to encircle Severodonetsk and Lysychansk from the west.

Let us also mention Rubizhne, Voyevodivka on the northern outskirts of Severodonetsk and the city itself, Maryinka, Vuhledar, Pisky and other towns and villages in the region, where the Armed Forces of Ukraine confidently defend. Moreover, even in the center of Mariupol at the Azovstal plant and in the suburbs of Popasna the fighting is going on.

On all other directions, Moscow was forced to cease active hostilities and move to maintain its positions and attempts to inflict losses on the defenders of Ukraine with the use of missiles and artillery. This applies even to the Izyum – Severodonetsk direction, which is a most important one for Russia in terms of creating an outer ring of encirclement of the Armed Forces of Ukraine in the Donbas.

And northwards and eastwards from Kharkiv, the Armed Forces of Ukraine are conducting a counter-offensive operation and have already regained control over a number of settlements. In case of further success on these directions, the Armed Forces of Ukraine will be able to reach the Ukrainian border with Belgorod region of Russia in the near future.

Besides, conditions will be created for the development of the offensive of the Armed Forces of Ukraine towards the cities of Vovchansk and Kupyansk in the occupied territory of Kharkiv region, through which the logistics of the Izyum group of Russian troops are provided. As a result, this group may be cut off from its bases and find itself encircled.

These prospects force the commanders of the Armed Forces of the Russian Federation to increase its forces in the north and east of Kharkiv region at the expense of reserves, as well as the transfer of troops from other areas, including from Izyum. This, as well as the lack of resources in Russia, are the main reasons for its suspension of active offensive operations in most parts of the front.

In turn, Ukraine uses this situation to conduct local offensives in Kherson and Zaporizhzhia regions. In particular, today the Armed Forces of Ukraine have already approached the northern (Chornobaivka) and eastern suburbs of Kherson, which forced the enemy to move its headquarters to the eastern part of the region. Apparently, some elements of the offensive are also being carried out from the area of Hulyaypole in the direction of Polohy, Zaporizhzhia region, which disrupts the enemy’s plans to reach the Zaporizhzhia – Donetsk highway.

In general, these circumstances confirm the emergence of a dynamic balance of forces of the parties on the front line. At this, both Russia and Ukraine have certain advantages and problems.

Thus, according to experts, the number of personnel of the armed forces of the parties in the areas of hostilities is approximately equal.

In particular, there are about 95 battalion tactical groups of the Russian Armed Forces in Ukraine. Of these: about 25 on the Izium direction; 40 – in Donetsk and Luhansk regions; up to 10 – in the northern and eastern parts of Kharkiv region; up to 9 – in Kherson region; up to 14 – in Zaporizhzhia region.

In total, this is about 70 % of the ground forces of the Russian army. That is, there are up to 30 to 40 battalion tactical groups in the Russian reserve, which can be involved without general mobilization. However, it is almost impossible to involve them all in actions against Ukraine, as Russia is forced to keep a certain number of troops in other regions of its country to deter real and potential adversaries.

In addition to the Russian Armed Forces, up to 15 battalion tactical groups from the Rosguard, which perform punitive police functions, can operate in the occupied territories of Ukraine. Moscow is unlikely to be able to attract more such troops, as their reserves are almost depleted.

About 30 brigades of the Armed Forces of Ukraine are opposing the troops of the Russian Federation directly on the front line. Of them – 8 to 9 brigades in the Donbas. In total, this is the same 90 battalion tactical groups. They are accompanied by at least five National Guard brigades and as many Territorial Defense brigades.

At least 5 to 6 brigades of the Armed Forces of Ukraine remain or are being formed in the rear. There are also local units of the National Guard and Territorial Defense in each regional center. All this, in fact, is equal to Russia’s available reserves.

However, this problem is gradually being resolved in favor of Ukraine. Firstly, the Armed Forces of Ukraine are successfully destroying enemy’s heavy weapons using both old Soviet and much more high-tech Western weapons. Secondly, Ukrainian army is adopting tanks, armored vehicles, missile and artillery systems thrown by the enemy. As a result, today we have already more military equipment taken away from Russia than the Armed Forces of Ukraine have received from Ukroboronprom during its entire existence. Thirdly, Ukraine has already begun to receive heavy weapons en masse from partner countries. As you know, the key factor in this process was the adoption of the US lend-lease act, which provides military-technical and other assistance to Ukraine in strengthening its defense by $40 billion.

As for Russia, its ability to compensate for the loss of military equipment is limited by the resources of storage facilities for obsolete military equipment that has remained since the former Soviet Union. What this military equipment looks like, and what it is, can be seen on the front lines. As well as its lagging behind the similar Western weapons of the same generation, which are supplied to Ukraine. In particular, the firing range of American 155-mm howitzers is 5 to 10 km longer than that of Soviet 152-mm systems, which allows us to fire at the occupiers’ positions without hindrance.

And finally, the most important factor is the much higher morale of Ukraine’s defenders. For example, in Ukraine, military registration and enlistment offices are forced to deny volunteers conscription because of their large number. In contrast, in Russia, the possibility of announcing a general mobilization is seen as a threat of national catastrophe. That is why Moscow will not be able to recruit enough troops.

In general, the analyzed aspects confirm the transition of the war into a positional form with local battles and relatively insignificant advances of the parties’ troops on individual directions. Exceptions to this are Donetsk and Luhansk regions, where the fighting is still active. The results of the battle of the Donbas and the further course of the war in the short and medium term will depend on their results.

At this, the main task of the Armed Forces of Ukraine in the Donbas region is to maintain its positions for about a month, which will allow Ukraine to obtain a sufficient number of Western weapons and gather forces to move to a larger counteroffensive. It is obvious that at the first stage the aim of such actions will be the defeat of the enemy in the Donbas, the final cleansing of the Kharkiv region and the liberation of Kherson. If successful, Ukraine can start deoccuping other territories.

Of course, Russia understands this possibility and is also taking steps to gather strength. In particular, covert mobilization continues through the recruitment of reservists and volunteers from various paramilitary groups. Besides, measures are being taken to increase the production of military equipment, including by transferring the defense enterprises to an intensified mode of operation. Russia’s intensification of hostilities in Kherson and Zaporizhzhia regions is not ruled out.

However, the whole civilized world is together with Ukraine, while even Russia’s closest allies have left it. Therefore, by the end of the summer of 2022, Ukraine may drive out enemy from its territory, as predicted by US military experts.