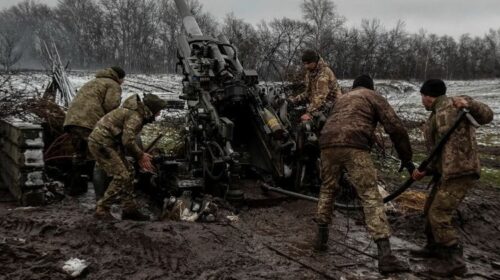 The hottest points of the front are now in Donetsk and Luhansk regions. In the south, Russia is trying to regroup its troops. Ukrainian Armed Forces are moving towards Mariupol and Enerhodar. Military expert Ivan Sichen told about this in a comment to Gazeta.ua.

“Now the hottest spots are in Bakhmut area. The enemy threw there everything it could. Russians are trying to break through the defense line of the Armed Forces of Ukraine and seize the whole of Donetsk region. Avdiyivka and Maryinka are hot spots in Donetsk region. Active fighting is taking place in the north of Luhansk region near Svatovo. If we get to this settlement, we will have a direct road to Sievierodonetsk and Lysychansk”, Sichen says.

In the south, Russian troops are trying to regroup forces, the expert emphasizes.

“The troops must be replenished, have some rest, determine lines of attack or defense. Because in this kind of weather in the south, one cannot really fight. Therefore, in the near future, hostilities will actively continue in Donetsk and Luhansk regions”, says Sichen.

In the south, there are also certain signs that Ukrainian troops are trying to advance towards Mariupol, the expert adds.

“They are also advancing towards Enerhodar. In other areas, there is no sign of changes. Now it is very difficult to conduct both offensive and defense. I do not rule out the possibility that now there will be a short operational pause”, explains Sichen.