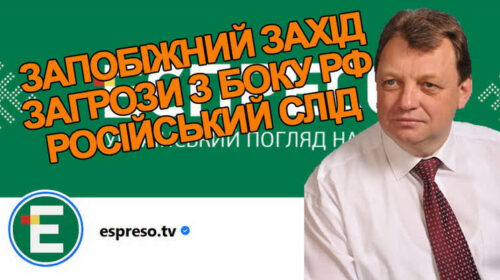 Former Head of the Foreign Intelligence Service of Ukraine (2016–2018), Doctor of Military Sciences Victor Hvozd, analyzes the current events in Ukraine and abroad on Espreso TV channel. We are talking about the expediency of the proposed by President of Ukraine V. Zelenskyi’s meeting with Russian President V. Putin, about possible consequences of the Russian propaganda “machine” both in Russia and in Eastern and Western Europe, about possible provocations of Russian troops concentrated on Ukrainian-Russian border, which could escalate into hostilities, and how many military units Russians actually need in order to decide on a full-fledged operation to attack Ukraine.

The conversation is also about the changes in the world security system that have resulted in hostilities in Israel, as well as Iran’s current policy, and who is really behind the situation, seeking to increase its influence in the Middle East, and what role Turkey is playing there.

A separate topic is the activities of the Kremlin agents in Ukraine, who, how and why actually manages them, and how this threatens our security. V. Hvozd analyzes the consequences of the recent decision of the National Security and Defense Council of Ukraine to close certain TV channels, impose sanctions on certain MPs from “Opposition Platform — For Life” (OPZZh) and the escalation on the line of confrontation in our East which followed, as well as whether such issues will be raised at the meeting of US President J. Biden and Russian President V. Putin if the meeting does take place in summer this year.