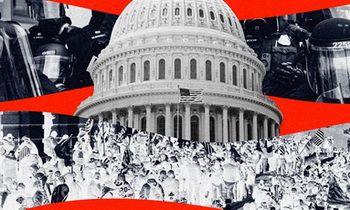 The Storming of the US Capitol and Its Geopolitical Consequences

As most experts predicted, the year 2021 opened a new page in the world’s problems and crises, which are becoming even worse than in 2020. This refers to the riots in the United States caused by the change of power in the country after the presidential election last November. And already in January 2021, on the eve of the inauguration of the newly elected US President J. Biden, such riots escalated into outright insurrection and violence. The most resonant was the storming by Trump’s supporters of the US Congress building, where lawmakers meet to confirm Biden’s victory.

In fact, this happened for the first time in more than 200 years. Several people were killed during the clashes in the US Capitol, which was also an unprecedented event for the United States. And while the US law enforcement forces localized the mess, and the US Congress continued its work and confirmed Biden’s victory, all this became symbolic for the United States and the world at large and will have long-term geopolitical consequences. Preliminary analysis of this situation allows us to draw the following conclusions:

First, the change of power in the United States is deeper in nature than its transition from D. Trump to J. Biden, or from the Republican to the Democratic Party. As emphasized in my article “The End of the “Era of Populism”. Elections in the USA, the World and Ukraine”, this means that the populists have in fact lost their positions in America, and at the same time in the world, and are being replaced by pragmatists and realists. At this, like other global changes in the world, this process is accompanied by a fierce struggle between supporters of different ideologies and different political and economic groups;

Second, the situation in the United States confirmed the division in American society, which was exacerbated by a number of internal and external factors. First of all, because of Trump’s populist policy.

We should also mention the foreign influence on public opinion in the United States, in particular, on the part of Russia in its large-scale information campaign involving social media platforms, traditional media and other tools.

The contradictions in the American society are evidenced by the unequal attitude of citizens to the fact that Trump’s supporters stormed the US Congress building. For example, the vast majority of American politicians, including former US Presidents B. Obama, B. Clinton, G. W. Bush, and J. Carter, have condemned the actions as “the great dishonor and shame”. At the same time, according to opinion polls, 45 % of Republican voters supported the storming of the US Capitol as a demonstration of disagreement with Biden’s victory. However, many of those who supported D. Trump, even high-ranking officials in his administration (in particular, Vice President M. Pence), disagree with such violence;

Third, the United States’ adversaries, who seek to undermine its power and influence in the world, are quick to take advantage of this situation. An example of this is the actions of the same Russia, which traditionally uses the problems of the United States to its advantage. Thus, with the beginning of the above-mentioned violence, Russia intensified informational and special subversive measures in order to provoke further complication of the situation in the United States, as well as to demonstrate the “advantages of stability” in Russia under V. Putin. The main content of such measures was the statements of Russian politicians, experts and journalists about the “beginning of the US Civil War”, “the approaching collapse of the United States”, as well as the “failure of Western democracy”. At the same time, Russia provided informational support to Trump’s actions.

And even more so, there is some evidence of Russia’s direct involvement in the unrest in the United States. In particular, according to US intelligence, on the eve of the next wave of protests by supporters of D. Trump in January this year, Russian hackers massively attacked computer networks of US government agencies. At the same time, so-called Internet trolls related to Russia actively called on through American social networks to protest on the side of D. Trump. And if this is not enough, the media got a video footage which proves that Russian-speaking people participated in the storming of the US Capitol;

Fourth, these riots have already damaged the authority of the United States. Thus, according to experts, it ceases to be a world model for other countries, including its allies and partners, and lose the place of the main stronghold and leader of democratic and liberal values. And for a number of states, this becomes an additional argument for their own path of development.

According to Speaker of the US House of Representatives N. Pelosi, the riots that were organized by D. Trump became “the biggest gift to Putin. Trump is a complete tool of Putin, whose goal was to diminish the role of — the view of democracy in the world”;

Fifth, confirmation of Biden’s victory will not mean the end of the internal confrontation in the USA. The new US President and his administration will inevitably face active opposition from D. Trump both in the US Congress and in the society. Especially since his supporters have strong positions in the US Republican Party and the organizational structures created by Trump’s “Save America March”, and also have significant financial support from business affiliates. Based on this, D. Trump will try to achieve revenge in the next presidential election in 2024.

At this, J. Biden’s harsh reaction to such developments, in turn, will continue to shake the political situation in the United States. In fact, this is what was meant by the storming of the US Capitol, which became an outright challenge to J. Biden and at the same time a test of his ability to withstand such attacks;

Sixth, in general, such circumstances will shift the attention of the new US leadership from foreign policy issues to internal confrontation with the opposition, which will complicate for J. Biden the implementation of his foreign policy election program, including support for US allies and partners.

For Ukraine, the aggravation of internal problems in the United States will have negative consequences. On the one hand, it should be expected that J. Biden will try to increase pressure on Russia and expand aid to Ukraine. On the other hand, such steps by the new US President may provoke overt or covert opposition from Republicans in the US Congress.

Besides, Russia will continue to try to provoke confrontation in the United States to use it in its information campaign. In particular, Moscow will provide new examples of possible future unrest in the United States and violations of democratic norms as proof of “the wrongness of Ukraine’s Western choice” and evidence of the need to return to the sphere of influence of “the stable Russia”.

However, this will not be crucial. The main for Ukraine was and remains the adherence to a firm course to ensure its own national interests, including within the framework of a well-thought-out and balanced policy in relations with the United States.