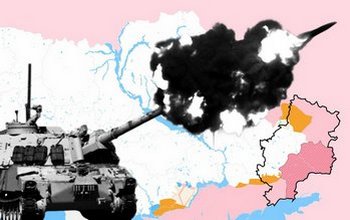 Peculiarities of the Situation and Prospects for Its Development

Recently, Russian Minister of Foreign Affairs S. Lavrov made a statement on the priorities of the “special operation” in Ukraine, which were called “complete liberation of the DPR and LPR”. It is known that Russia coined the term for its intentions to occupy Donetsk and Luhansk regions of Ukraine within their administrative borders. At this, Moscow is in no way going to return to Ukraine the occupied territories of Kharkiv, Zaporizhzhia and Kherson regions. Moreover, as far as possible, Russia will try to seize neighboring areas of Ukraine. However, Lavrov’s statement is significant. In fact, for the first time, the Kremlin has openly acknowledged the inability of Russian troops to conduct several offensive operations on Ukrainian fronts simultaneously. In turn, this is evidence of the actual turning point in the war and its transition to the next — positional phase.

Of course, Russia still has the strength to continue the war against Ukraine. Quite probable is its capturing Sievierodonetsk, where street fights are taking place, and Lysychansk. After that, Moscow will apparently focus its efforts on taking control of Sloviansk and Kramatorsk as well. Moreover, Russia may attempt to re-attack Chernihiv, Sumy and Kyiv, although it does not currently have the necessary forces to do so.

However, only to ensure offensive operations of the operational and tactical level in the area of Sievierodonetsk and Lysychansk, the RF Armed Forces was forced to transfer combat-ready units from other fronts, as well as use the last prepared reserves. Nevertheless, the achieved local results have no real military significance and have only domestic political significance for Moscow.

Despite the rather modest nature of such “achievements”, Russia pays a high price in both the military and economic spheres. First of all, this price is the depletion of Russian troops as a result of losses in personnel and equipment. The losses of the occupiers are published daily by the General Staff of the Armed Forces of Ukraine and are really impressive in their scale. And to replenish them, Russia is conducting covert mobilization and removing from storage the outdated and technically obsolete weapons.

In particular, on May 8, 2022, in Russia, the conscription of so-called BARS reservists (combat army reserve forces) was announced. Currently, they are forming reserve units, which are sent to the front. In addition, age restrictions on contract service have been lifted. By the way, they are starting to recruit contractors, using threats at the local authorities level. Another form of covert mobilization is the call for additional police recruits, as its personnel are heavily involved in Ukraine, where it suffers casualties, for strengthening the security of various facilities and serving at checkpoints.

But while soldiers and sergeants can still be recruited and trained quickly enough, it is much more difficult with officers. Especially in the conditions of shortage of officers because of military losses. And their quick replacement is possible only with the help of retirees, most of whom cannot fully participate in hostilities due to partial loss of skills and physical form.

Much has already been said about the lack of military equipment in the RF Armed Forces, including in our previous articles. It should be noted that obsolete T-62 tanks from storages have begun to be used by the Russian military command in secondary directions, where they are successfully destroyed by the Ukrainian defense forces. BMP-1, which are painted and called “new” or “modernized” equipment, are also removed from storages.

And then there are sanctions that inflict enormous damage on Russia and undermine its ability to wage war. As reported in the media, the approved by the EU on May 30, 2022, sixth package of sanctions provides for an embargo on two-thirds of Russian oil imports worth more than 20 billion US dollars.

Maximizing Russian losses is the main task of the Ukrainian Army in the Donbas. To this end, the Armed Forces of Ukraine continue to use effective methods of combat operations, which include tough defense in some and maneuverable in other areas, combined with the transition to counterattacks, where possible.

For example, Ukraine’s defense forces are toughly maintaining their positions in the Donbas, although in some places they are retreating under pressure from the overwhelming enemy. At the same time, the Armed Forces of Ukraine continue to take active steps to bind the enemy in the north of Kharkiv region and have already threatened its communication near the city of Izium. In fact, the advance of the enemy from Izium to the south towards the town of Sloviansk and to the south-west towards the town of Barvinkove has been stopped. The advance of the enemy towards the city of Zaporizhzhia has been stopped. A counteroffensive is being carried out in the Kherson region. At this, the life of soldiers and maintenance of equipment has a higher priority for the command of the Armed Forces of Ukraine than retention of individual settlements in unfavorable conditions.

In addition to inflicting losses on the enemy, this approach allows to gain time to accumulate reserves of defenders of Ukraine. This applies to both the Armed Forces of Ukraine and the National Guard and the Territorial Defense Forces. By the way, according to official reports, most of the more than thirty territorial brigades from the depths of Ukraine are on the front lines. New units are being formed instead.

As you know, our Western partners, first of all the United States, the United Kingdom, Poland, Slovakia, Lithuania, France and Denmark, play an important role in strengthening Ukraine’s defense capabilities. Their heavy weapons, which were transferred to Ukraine, in particular — long-range howitzers, tanks, armored combat vehicles, UAVs and other equipment, weapons and ammunition are already used at the front or used to replenish reserves. This is gradually compensating for Russia’s advantage over Ukraine in these weapons, which it still retains, especially in the Donbas.

Even more weapons will begin to arrive in Ukraine in the near future with the beginning of the United States’ lend-lease program for our country. In particular, it will include the transfer to Ukraine of the MLRS rocket systems with a range of more than 60 km, which will allow strikes not only on enemy positions on the front line, but also on its rear and transport communications. In addition, the United States is moving from arms supplies to Ukraine by transport aircrafts to the use of cargo ships that regularly arrive in European ports. New logistics capabilities significantly increase the volume of weapons, equipment and various supplies delivered to Ukraine.

In general, these circumstances create favorable conditions for Ukraine’s transition to a counteroffensive in the summer of this year. However, this will be a difficult task and will require significant effort and resources. Unfortunately, there will be new looses and destruction of civilian infrastructure. However, without this, victory is impossible.

The first part of the article:
“The Battle of the Donbas. The Second Stage of the War: the Course and Consequences”