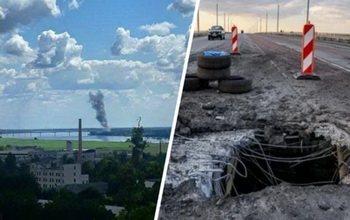 Thanks to the successful strikes of the Armed Forces of Ukraine on the Antonivka Bridge in Kherson region, the logistics of the Russian occupying forces have been significantly disrupted. The Russians will have to move further and be target to the Ukrainian artillery. The occupiers are almost trapped. Military expert Ivan Sichen told about it in a comment to Gazeta.ua.

“There is a tendency near Kherson that we start to press the enemy. An important event took place today [July 19–20] — our troops destroyed the Antonivka Bridge. The logistics of Russian troops to the right bank of the Dnieper is conducted through it. Heavy equipment cannot pass there. And the Russians will have to go much further — through the dam across the Kakhovka Reservoir. The road there is under fire by our artillery. Therefore, the Russian troops near Kherson is de facto trapped”, says Sichen.

Kherson and the region are now one of the most important directions of the front, explains Sichen.

“If we liberate these territories, Russia will lose its bridgehead on the right bank of the Dnieper. After that, it will not be able to attack either Mykolaiv or Odessa. And we will be able to redeploy the troops from these directions to others, start the liberation of other territories. Russia is not capable of crossing the Dnipro on a large scale. There will be no supplies to the Russian troops, and without them they won’t be able to fight much”, says Sichen.

In the Donbas, the war has turned into a positional form, the expert emphasizes.

“Battles without any particular changes. We maintain a tough positional defense. This is the first most important task at this stage. The second is to liberate Kherson region. We have already implemented it in the Donbas. Since the beginning of July 2022, the occupiers have not advanced anywhere. Because they are suffering huge losses and we have started striking their warehouses and bases. After that, the Russians have to further pull back the rear, which takes time”, adds Sichen.