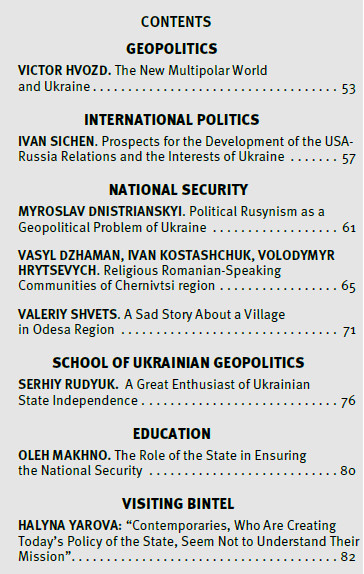 This year’s first issue of the “BINTEL” Geopolitical Analytics Journal is traditionally opened by the material by President of the “Borysfen Intel” Centre Victor Hvozd. The article is entitled “The New Multipolar World and Ukraine”. The author summed up the results of political events, the beginning of which dates back to 1980–1990. This means the “Cold War” between the Western and Eastern blocs, which, according to the author, was considered a kind of prolongation of the Second World War and could in fact have turned into a nuclear catastrophe. But this was avoided, because former adversaries eventually gave up confrontation and tried to normalize their relations. What and how happened later, who and why began to slow down positive processes of the world development, where the new centers of power began to emerge and where they began to move, what role in all this is assigned to our Ukraine — all this you will find in the material, published under the heading “GEOPOLITICS”.

In particular, the author points out that stability in the world is seriously threatened by socio-economic inequalities between different countries and segments of their population. And for confirmation, he cites the report by the non-profit organization Oxfam, which states that since the financial crisis of 2007–2008, the number of billionaires in the world has doubled to about 2 thousand people. Of these, 26 richest people have a total wealth of 1.4 trillion US dollars, which equals the total income of 3.8 billion ordinary people. In 2018, the billionaires’ wealth has grown by 900 billion US dollars, while the resources of the poorest half of humanity decreased by 11 %. 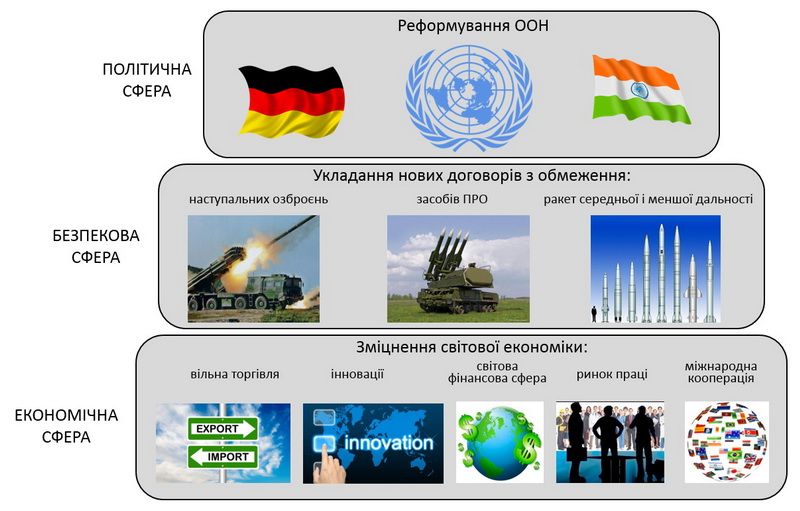 Analyzing other problems of global scale, the author predicts further developments in which a multipolar system of world order will be formed, tells which countries, in his opinion, will play the “economic melody of the first violin”, which countries will be in the wake of political and economic development, and who will have to be happy with the role of the “crowd”. As for Ukraine, says the author, it should be prepared to defend its interests and security first of all by its own forces, using all available resources.

The article is illustrated with high-quality pictures and charts.

In a narrower sense, but not less thoroughly, another author, Ivan Sichen, shows his vision of the prospects for the development of relations between the United States and Russia and the interests of Ukraine. The main disagreement between the USA and the Russian Federation in the political sphere is the struggle for influence in the world, but in fact — for the model of the world system, which would be beneficial for each of the states. Now, as we have already mentioned, Ukraine is in the center of this struggle, as evidenced by Russia’s armed aggression against our country. In fact, Russia’s attack on Ukraine can be considered a greatest violation of the world’s geopolitical system, which was formed after the collapse of the USSR. And therefore, on the resolving of the Ukrainian problem will depend the United States’ ability to stop Russia’s expansion, to prevent it from reaching the level of the former Soviet Union and to become a new center of world-class power.

The author also refers to the text of the new US National Security Strategy, adopted in 2017, to other conceptual documents adopted by the administration of US President D. Trump. The author writes that in the process of the struggle for preservation of its global leadership in the world, the United States, in fact, relies exclusively on its own strength, which is the result of other great powers’ being interested in a different — multipolar — system of international relations. And he draws a conclusion, that this precisely explains the isolationist policy of the current US leadership. He also shows how and why Russia supports the process of formation of the multipolar world. Obviously, says the author, the United States will continue to adhere to a rigid policy regarding the Russian Federation, with the use of political and economic sanctions including. While Russia, in its opposition to the USA, will exert pressure on Ukraine to bring it back to its sphere of influence. At this, I. Sichen is sure that the Orange Revolution and the Revolution of Dignity demonstrated the futility of Moscow’s hopes to establish a pro-Russian government in Ukraine.

He believes, however, that in the immediate and medium term, Russia’s armed aggression against Ukraine may grow in scale, including a full-scale offensive operation deep into the Ukrainian territory.

In the opinion of the creative team of the journal, Myroslav Dnistryanskyi‘s article “Political Rusynism as a Geopolitical Problem of Ukraine” will be useful for our readers. In it the author analyzes the problem of preserving the unity of the Ukrainian people and the territorial integrity of the Ukrainian society as a whole. The author observes that Ukrainian politicians have some idea of this problem, but mainly reduce it to a regional or even local level. But in reality, it is not at all local, because its destructive (often latent) influence spreads to different spheres, far beyond Ukraine included. And to emphasize its importance, he provides the facts, historical and current events, focuses on how this problem was and is used by our enemies to plunge Ukrainian statehood, to counter the unity of the people, to impose on the international community the idea of the need for federalization of the entire Ukraine.

According to M. Dnistryanskyi, in the Trans-Carpathian region in 2006 the new rise of the political Rusynism was inspired with the assistance of the leadership of the Secretariat of the President of Ukraine and with more active support by Russian special services, which was manifested in the “legalization” by Trans-Carpathian Regional Council of the “Rusyn identity” in March 2007 and the virtual declaration of independence of “Sub-Carpathian Rus” in 2008. Since the beginning of Russia’s aggression in 2014, activists of political Rusynism have clearly sided with Russian and pro-Russian separatist forces, actively supporting disintegration of Ukraine. That is, the problem of Rusynism is not overcome, so the article tells how to do it, and what arguments to use to eliminate it. This theme continues in another article of the journal — “Religious Romanian-Speaking Communities of Chernivtsi Region”, by three authors — Vasyl Dzhaman, Ivan Kostashchuk, Volodymyr Hrytsevych. The work is illustrated by many tables, photos, graphs. The reader is able not only to get acquainted with the demographic state of Bukovina, but also to understand the role of the church in this region of Ukraine, inhabited by representatives of many nationalities and religions. 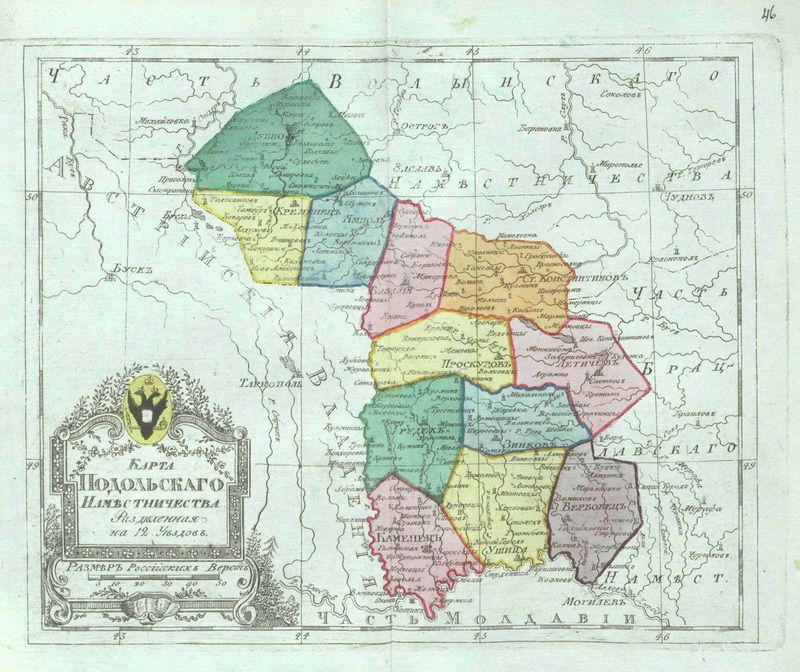 By publication “A Sad Story About a Village in Odesa Region”, its author, Valeriy Shvets makes readers think about the origin of their own, their parents and their older generations. He does this, telling about the study which he conducted in his native lands, digging into archival documents of a century ago. It seems to have been so long ago — the beginning of the last century! But no… Reading the lines of the article, you seem to be reading about the events of the present. Today, as in the past, the village is suffering from the uninvited, today, as before, it is looking for a way out of the political turmoil, hoping for a better future, which was not only dreamed about, but also defended by grandparents and great-grandparents. And here the author uses not some kind of poetics, but clear and indisputable evidences that he found in the archives, analyzed, wrote and now asks: our dear ideologists, try and deny all this. You cannot, because, as the saying goes, facts are stubborn. For one, the author points out that during all prewar years, the average life expectancy kept decreasing and before the war reached the level of the beginning of the 20th century, that is, the life expectancy of the Neanderthals. At this, while in the 1920s the birth rate exceeded that of death, in the 1930s everything was vice versa. It seems that the average life expectancy in the Soviet era depended on the distance to local authorities and the quality of roads between settlements. The smaller this distance, the lower the average life expectancy was. The worse was the quality of roads, the higher the average life expectancy. The Moscow authorities tried to turn Ukrainian villages into a complete and utter cemetery, as they understood that Ukrainian villages were the soil on which the next generations of rebels would grow.

And the author writes: “My greatest discovery after dozens of hours of archival work is that the genocide of the Ukrainian people took place not in 1932–1933. It lasted all years before the Second World War, and then also after its completion, until Stalin’s death. It began before industrialization and lasted after its completion. It cannot be considered accidental”. 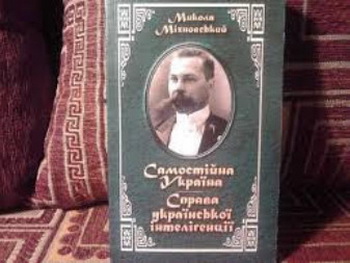 Also, under the heading “SCHOOL OF UKRAINIAN GEOPOLITICS”, we offer our readers Serhiy Rudyuk‘s work “A Great Enthusiast of Ukrainian State Independence”, which refers to the prominent Ukrainian lawyer, a fiery publicist, a well-known political and public figure, the founder and leader of independence movement in the Ukrainian national liberation process of the late 19th and first quarter of the 20th century Mykola Mikhnovskyi, whom his contemporaries called an Apostle of Ukrainian state independence. In his article, the author describes how M. Mikhnovskyi was determining the principles of defending Ukraine after the collapse of the Russian Empire, how on May 5–8, 1917, at the First Military Congress M. Mikhnovskyi voiced the idea of “immediate nationalization of the army according to a national-territorial principle”. Unfortunately, the then leaders of the Ukrainian Central Rada, having false hopes for the peacefulness of “All-Russian democracy,” did not support him, and an attempt by the military of the Second Ukrainian Cossack Regiment named after Pavlo Polubotok to force them to promptly declare the state independence of Ukraine on July 3–4, 1917, ended in failure. The precious time for real state-building was wasted. And when, as predicted by M. Mikhnovskyi, at the end of 1917 the post-totalitarian “democratic” Russia declared war on Ukraine, the state was unprepared to repulse the enemy’s aggression.

According to our tradition, we will post a part of the interview on our website, and those who are interested in it and other journal materials, can read them by buying this issue.