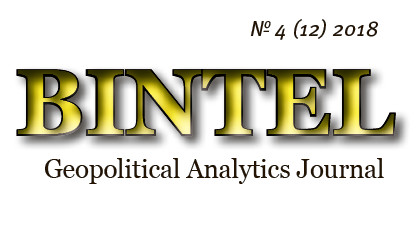 Traditionally, the latest issue of the “BINTEL” journal, published on the eve of the new, 2019 year, contains articles on geopolitical topics. Since the passing year was full of various geopolitical events that concerned Ukraine, the authors of the articles, in one way or another, not just state, but also explain the reasons for those events, warn against premature conclusions or non-motivated remarks.

The issue is opened by the article “Peculiarities of the Development of the Situation in the World in 2018 in the Context of Ukraine’s National Interests”. Its author, V. Hvozd, in his usual style analyzes geopolitical events of the recent months, shows the civilized world’s reaction to them, and, in particular, to the goals our north-eastern neighbor with his “Russian world” is trying to achieve with military force in the East of Ukraine, and in the Mediterranean, in the northern part of the African continent, in Syria and in Europe. The author emphasizes that Russia’s interfering with our country’s economic activity in the Azov region can be considered a new form of its aggression against Ukraine. And all this Russians do in order to take over control of traffic flows in the Azov region and to create another conflict center on the border of Ukraine, which would not only spray its economic resources, but also increase tension in the Ukrainian society. By its occupation of the Crimean Peninsula, — writes the author, — Russia seeks to change the delimitation scheme of the Azov Sea and to control most of the Azov waters — from the Crimea and to its Rostov region and Krasnodar Territory. To this end, Russia has increased its military presence in the Azov region, having concentrated at least 40 warships and boats there, including those redeployed from the Black and Caspian Seas. In fact, Russians have blocked the process of the political settlement of the conflict in the Donbas, putting forward unacceptable for Ukraine conditions of meeting in the Normandy format at the highest level and demanding recognition of the “DPR” and “LPR” without the withdrawal of Russian troops from their territory. The article consists of separate parts, among them — “Russia’s Armed Aggression Against Ukraine. Peculiarities of Actions of the Russian Federation and of Partners and Allies of Ukraine”, “Major Events and Trends in the Development of the Situation Around Ukraine”, “Formation of the Multipolar System of the World Order. Ukraine’s Role and Place in the New World”, etc. In the article, the author identifies our partners, points out the main aspects of their activities regarding Ukraine’s interests. These are the United States of America, the European Union, and NATO. He also draws attention to the RF’s activities in post-Soviet territories, its role there which the PRC is trying to take over, peculiarities of the situation in the regions important for Ukraine. The conclusion is as follows: in 2018, the main factor influencing the situation around Ukraine and threatening its national security was the armed aggression of Russia’s, which had been improving measures for further military invasion of Ukraine, a full-scale offensive included. 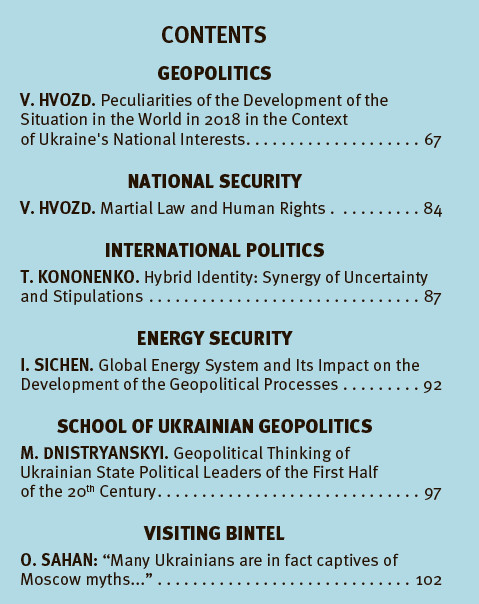 Military and political expert I. Sichen in his article “Global Energy System and Its Impact On the Development of the Geopolitical Processes” explains, that energy is one of the key factors affecting the military-political situation in the world, where the state of international relations is largely shaped by the configuration of the world energy system. Besides, the author warns, that the format of the world system of production and consumption of energy carriers will change once more, which will cause the emergence of a new geopolitical situation in the world.

Interesting is the theme of T. Kononenko‘s article, entitled “Hybrid Identity: Synergy of Uncertainty and Stipulations”. It seems to be enough to just give the subtitles of this original work to draw the reader’s attention to it. To begin with, today, few are the scholars and real politicians who not only seek, but can also analyze the modern Ukrainian identity. Secondly, without understanding its significance, we can hardly explain the events that have been taking place in Ukraine for half a century. Thirdly, without taking into account this identity, one cannot determine the direction of the development of the Ukrainian society, which has actually been trying to prove to the world its right to independence, and the true leaders of this society once again are sacrificing themselves to secure this right.

In a way, T. Kononenko’s conclusions are confirmed in other publications of the “BINTEL” journal, such as “Geopolitical Thinking of Ukrainian State Political Leaders of the First Half of the 20th Century”, by M. Dnistryanskyi and “Martial Law and Human Rights”, by V. Hvozd.

M. Dnistryanskyi explains that the practice of political activity was determined by the geopolitical consciousness of politicians, that is, by their views on their people and their country in the context of relations with other states, especially neighboring ones. And gives examples from the history of our state, in particular, the views on Ukrainian state-building of such famous figures as M. Hrushevskyi, M. Drahomanov, M. Skrypnyk, L. Rebet, A. Kaminskyi, P. Poltava. By the way, the views of the latter were interestingly analyzed back in 1946 in the work entitled “The Concept of an Independent Ukraine and the Basic Trend of Ideological and Political Development of the Modern World”, where the Ukrainian problems are considered against a the wide background of international relations, and the author on many examples shows that “history is developing in the direction of creation of independent national states of all peoples”, and “the desire of the people to an independent state life is its organic natural aspiration”.

In the context of the current events important for Ukraine, one can perceive the interview with the well-known and respected religious scholar O. Sahan. Under the heading “Visiting BINTEL,” he analyzes current events in Ukraine, in particular, granting Tomos to the Ukrainian Orthodox Church. The conversation with O. Sahan took place almost on the eve of the events and went beyond them, because in answering the questions he did not just mentioned them, those events, but also explained why they are so complex and what efforts will have to be made by the Ukrainian society to overcome the problems. But then, the very title of the interview says it all: “Many Ukrainians, especially believers, are in fact captives of Moscow myths that partly or completely distort the history of Orthodoxy in Ukraine and in the world, distort and falsely convey church canons, rules and traditions”.