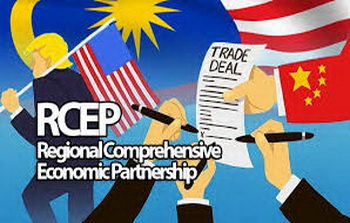 Determining their further geopolitical steps today, the leading countries of the world are somehow forced to take into consideration the current situation in the Asian region.

I mean the November 2019 high-level meetings of the member states of the Association of Southeast Asian Nations (ASEAN) in the Bangkok, capital of Thailand. At the summit, 15 countries confirmed their intention to enter into a major free trade agreement next year, called the Regional Comprehensive Economic Partnership (RCEP). The draft agreement between 10 ASEAN member countries (Indonesia, Malaysia, Thailand, Philippines, Vietnam, Myanmar, Brunei, Laos, Cambodia and Singapore) and their 5 other FTA partners (China, Japan, South Korea, Australia, New Zealand) was proposed in the autumn of 2012… When exactly next year the agreement will be signed, has not yet been determined, though it was supposed to be signed this year.

The geopolitical factor of the trade war between the two most powerful economies in the world — the United States and China — stimulates the sharpening of negotiations on the adoption of appropriate decisions by the APR states. The negotiation of the Regional Comprehensive Economic Partnership is taking place with the fierce hidden struggle of these countries, which are trying to defend their own geopolitical interests.

China remains the dominant and decisive factor, which in case of signing the RCEP next year, will further strengthen its influence both in the Asia-Pacific region and in the world in general. The USA has to consider its influence and interests in the APR. Based on the US President’s demonstratively pragmatic policy towards the EU and NATO countries, we may expect that the foreign policy activities of the leading EU countries with the Asia-Pacific countries will intensify. First of all — with China, India, Vietnam.