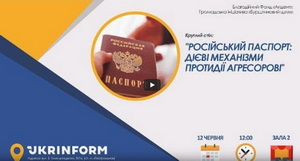 June 12, 2019, the “Ukrinform” agency hosted a “round table” themed “Russian Passport. Illusion of the  Imperial Gingerbread”, which was attended by analysts of the “Borysfen Intel” Center

Any document can be not only a form of identification of someone or something, but also… a weapon. At least when it comes to the Russian passport and the “Russian World” and its sincere admirers. These two sentences can outline the theme important for Ukraine, which was raised during the international “round table” ( June 12, at Ukrinform), initiated by the “Accent” Charitable Foundation and the “Amber Path” Public Initiative. Each activist and political scientist present at this “table” tried to speak, based on the accumulated general information and concrete examples. Namely, about the RF’s reasons for issuing Russian passports to Ukrainian citizens, why it dared to do it now, and not, for example, a year or two earlier, how “voluntary” getting this document might be and whether those who are now in the annexed territories may refuse from it out of patriotic motives.