The issue begins with Chief of the editorial council of the journal V. Hvozd‘s article “Current Processes of World Globalization and Their Influence on Ukraine” (under the heading “National Security”), in which the author sets out his views on the role of such processes and their influence on the life of humanity in general and of the Ukrainian society in particular.

During such processes, the author says, economic systems and markets of different countries integrate into the planetary space with the free movement of information, goods, services, capital and labor force. This has been observed since ancient times, starting from the 3rd millennium BC, when the first states arose, and continues to this day. The processes of globalization of the world economy today go to a qualitatively new level, which will necessarily cause a series of global changes with diverse consequences. Yes, the author agrees, these processes, on the one hand, contribute to the growth of the world economy, but on the other — they slow down its development. As for Ukraine, it has certain unique features and advantages, thanks to which its partners will benefit from cooperation with it. What exactly the author means here — the reader will find out when reading the article that is accompanied by original color graphics and illustrations.

The above-mentioned thoughts is close to the theme of the next journal article “Military-Political Alliances and Coalitions on the Eve and During the Second World War” by the Head of the Department of Transatlantic Studies at the Institute of World History of the National Academy of Sciences of Ukraine S. Tolstov. The author investigates in succession and in detail the events that had led to the formation of such alliances, gives an assessment of the actions of the then main actors and their role in the world political arena, warns against possible repetition of mistakes made in the past. 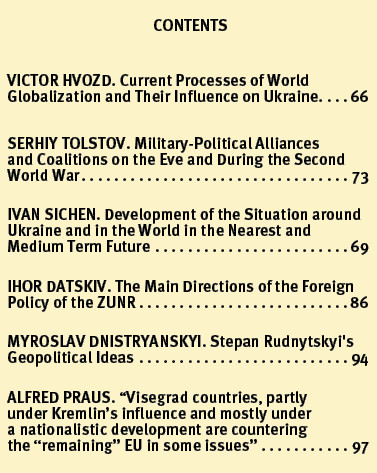 “Development of the Strategy of the USA’s Global Dominance in the Context of Geopolitical Changes in the World Since the Early 1990s” is the title of another article written by the military and political expert I. Sichen. It is enough to quote its first sentence to make the reader understand what it is about: “The USA’s policy to curb the Kremlin’s neo-imperial course is extremely important for Ukraine, against which Russia has launched hostilities”. The author argues that global world domination from the middle of the 20th century is considered to be the USA’s main geopolitical priority and is realized with the help of all its potential in the political, economic, military, information, special and other spheres. He consistently cites facts that eloquently confirm the author’s opinion.

The support of Ukraine, which is at the height of Russia’s expansion, is one of the main elements of the US policy of deterring the Russian Federation in the form of a consistent increase of pressure in the form of political and economic sanctions

Although the events described by historian I. Datskiv in his article “The Main Directions of the Foreign Policy of the ZUNR”, are now over a hundred years old, one can hardly dare to deny their relevance. The February 1917 revolution in Russia, the defeat of the Central Powers Bloc in the World War I in 1918, collapse of the Russian and Austro-Hungarian empires, formation of a number of independent states on their wreckage (Ukraine, Latvia, Georgia, Finland, Czechoslovakia, etc.) — does this not remind us of the present, when, as a result of the collapse of the USSR, nations and states must again make great efforts to remain independent? The author focuses on the titanic work of Ukrainian political and military leaders, who sought to win the Ukrainian nation’s right to its own statehood at the time when the bloc of the countries that won the First World War dictated the conditions of the world order to the block that was defeated in the war. It seems that the geopolitical events of those times are well known, a number of Ukrainian patriots did everything in their power to defend Ukrainian statehood for their people both at the diplomatic level and in battles with arms in their hands. And conclusions have been drawn.

But alas! As they say, there are “nuances” which were silenced then, and are silenced today. The author voices them in his article.

It is necessary to inform our readers that from this issue on we have a new heading “The School of Ukrainian Geopolitics”, in which materials will tell about prominent Ukrainian figures and their worthy contribution not only to Ukrainian but, also to the world geopolitics. Almost all of them are in one way or another known to our public, but at this historic stage it’s worth talking about them, because, as our history shows, in their analyzes and predictions they were accurate, and especially today, when Ukraine once again defends its right to existence in the world community as an independent state. Professor M. Dnistryanskyi tells about a well-known Ukrainian geographer, who in a number of important works had substantiated a sophisticated system of views on the geopolitical organization of the world and Ukraine’s place in it, and which became the top of Ukrainian politico-geographical and geopolitical analysis in the 20th century. The title of the article is “Stepan Rudnytskyi’s Geopolitical Ideas”. By the way, ten years ago in Ternopil, scientists unveiled a memorial plaque with a bust of Academician S. Rudnytskyi, whose photo is posted in this issue.

“Visiting Bintel” — another column that has become traditional, in which the journal publishes interviews with prominent personalities. This time, we asked President of the Ukrainian-Austrian Association A. Praus to answer our questions. The conversation took place on the eve of Federal President of Austria, Alexander van der Bellen’s visit to Ukraine, which was covered in detail in our and foreign media. About the direction of our conversation one can judge by the title of the interview — “Visegrad Countries, Partly Under Kremlin’s Influence and Mostly Under a Nationalistic Development are Countering the “Remaining” EU in Some Issues”. We believe that the conversation eventually turned out to be interesting and the reader will be able to draw his/her own conclusion about how Ukraine is perceived by Europeans who see it with their own eyes, and not through Russian “Today”s.