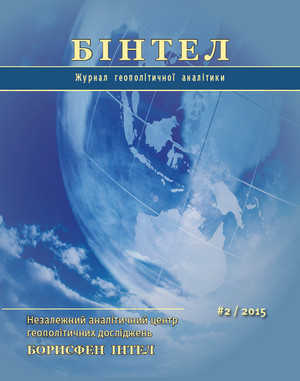 Independent Analytical Center for Geopolitical Studies “Borysfen Intel” has released the second issue of “BINTEL. Geopolitical Analytics Journal” — with analytical materials of the Center in Ukrainian and English languages.

The table of contents of the second issue:

Russia’s “Black List” as a “Reasoning” of New Aggression

May 29 these year Moscow sent to the embassies of European countries the “black list” as the media called it, which includes 89 European politicians from 17 out of 28 member countries of the European Union who are denied entry to Russia. The largest number of representatives of the EU countries on the list are from Poland — 18 people. Next on the list are as follows: from the UK — 9 people, Estonia and Sweden — 8, Germany and Lithuania — 7, Latvia and Romania — 5, France, Denmark and the Czech Republic — 4, the Netherlands — 3, Belgium — 2, Spain — 2, Bulgaria — 1, Greece — 1 and Finland — 1 person.

These figures as such tell little in the context of the content and intensity of the hidden conflict between Russia and one or another European country or the European Union as a whole. At first glance, it seems that they only indirectly show, to put it mildly, Moscow’s dissatisfaction with the EU and some of its member countries’ position. But what is really behind this demarche of the Kremlin?

Let us try to understand, based on the preliminary assessment of the “black list” and the subsequent events.

Afghanistan: a Repetition of the “Iraqi Scenario?”

What processes and key events characterize the domestic political and security situation in Afghanistan today? The analysis of events in the country in May and early June (see the Appendix) shows — the situation in Afghanistan is extremely tense, unstable, and there are no prospects for its fundamental improvement in the nearest future. The cheerful picture offered by the Official Kabul and its western allies disagrees with reality.

In other words, Afghanistan is now at a stage of dramatic change in the situation. “Taliban”’s militias continue so far secretly, but consistently to concentrate on the significant parts of the country. It is possible that it could be a scenario due to which, at the time, the situation in Iraq collapsed — the seizure of a large city, after which the current government simply will start “falling apart.” At this, there should be no illusions about the combat capability of the Afghan army and police. Even 10 times surpassing the Taliban in number: 300 thousand against 30, the government forces are totally incapable to resist them in straight (open) combat actions.

The EU and US Sanctions against Russia: Continuation Impossible to Lift

At the end of June, this year at the European Union Summit is planned to consider the question of continuation (partial or total lifting) of sanctions against Russia, introduced by the EU leadership due to the Russian military aggression against Ukraine. Further development of the situation around Ukraine depends on how this question is resolved. It is Western sanctions that are one of the major constraints on further military invasion of Russia in Ukraine.

For example, last year’s large-scale political and economic pressure from the United States and the European Union to the Russian Federation, expulsion from the “Group of Eight” (G8), interrupted cooperation with it through the EU and NATO, and especially excommunication of the Russian economy and financial system from Western loans, investments and technologies contributed significantly to the failure of Moscow plans for disintegration of Ukraine in the form of creation of the so-called “Novorossia”, which was to include eastern and southern Ukrainian regions. 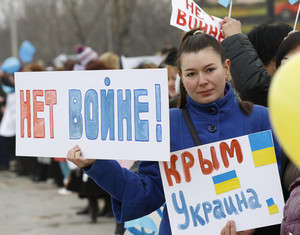 “The Crimea Is Ours”: Bleak Results of the First Year of the Russian Annexation of the Crimea

April, 2015 marked the first anniversary of Russia’s annexation of the Crimea. And it may well serve as an occasion to make a review of some results of this event. How was this year for the inhabitants of the peninsula, and what consequences has this annexation resulted in? The answer to this question is given by the realities of the situation there.

Most of the population of the ARC, who hoped that their life would be better after the Crimea’s becoming part of Russia, are deeply disappointed. In fact, the life there has changed greatly. To be exact: the economy of the Peninsula has deteriorated critically, socio-economic and ethnic problems have sharpened.

This is evidenced by the fall of the gross regional product of the Crimea by more than 11 % during the first year of the Russian occupation of the Peninsula. At the same time, the industrial production in the Autonomous Republic has decreased by 9.9 %; the volume of construction works — by 55.5 % (before the Russian occupation, the Crimean construction industry had one of the first places in Ukraine by the dynamics of development); the volume of cargo — by 32.1 %; the volume of passenger traffic — by 14.2 %.

The Collapse of the “Great Energy Power” or “The Defeat at the Strategic Front”?

It seems to have started. Against the backdrop of loud statements (including during V. Putin’s “direct line” on April 16, 2015) about “stabilization” and “renewal” of the Russian economy, the real financial and economic situation shows that the economy is exhausted, and the Russian Federation itself is increasingly losing its offensive (first of all, resource) abilities under the influence of international sanctions. The signs of the process have been repeatedly mentioned in Western and Ukrainian media, in “Borysfen Intel’s” publications included.

However, so far, the crisis in the Russian economy had some local nature and its results were not systematic for the state. But since the beginning of 2015 these trends have acquired a qualitative change, as demonstrated by the failure of the main strategic directions of the Putin regime’s policy. First, this regards to the energy industry, as the basis of the Russian economy as well as of global (basic) Kremlin’s plans to transform Russia into a “great energy state — the world leader in the production and supply of energy carriers”. 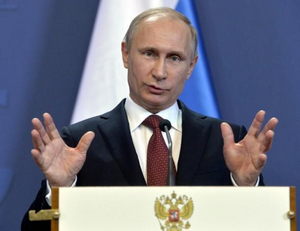 Lately, the vast majority of both Western and Ukrainian politicians and experts, on the basis of the Russian-Ukrainian conflict, have been trying to answer one question: what should Ukraine expect from Putin in the future, and how will the West react to it?

Today we can say with confidence that the requirements of the Minsk agreements (within the framework of “Minsk-2”, of February 12, 2015) the Russian side openly ignores, in every way delaying the process of their implementation — changes the composition of the negotiating parties, breaks meetings of the contact and working groups, suddenly declares new offensives.

The clear and consistent position of Ukraine, which closely follows the Minsk agreements, irritates Putin, forcing him to resort to bluff — that is to use, above all, constant “horror stories” about possible new offensives of his puppets in the Donbas, which should divert attention from Russia’s not fulfilling the promised.

In the new millennium the armed confrontation has been joined by the information one, and has become perhaps one of the main forms of solving conflicts between states. By the way, with the help of information operations the warring countries can achieve their strategic goals.

It was super-powerful anti-Ukrainian information campaign, called to ensure full Russian control over foreign and domestic policy of our country that became the main component of the Russian Federation’s “hybrid war” against Ukraine.

The experts of the Center “Borysfen Intel” have made the analysis of the Russian information influance and  offered an approach to creation of the all–nation system of information security, which would identify, analyse and estimate an information threats to national security, but would also preventively systematically counteract these threats and conduct offensive information actions, adequate to current satuation. 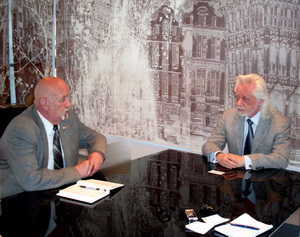 Co-founding Partner, President & CEO of SigmaBleyzer, Investment Group, LLC, Houston, Texas based Private Equity firm, which over the last 20 years has raised approximately $1 billion most of which have been invested in Ukraine. Chairman of the Board of AgroGeneration, French publically traded company operating one of the most successful agricultural businesses in Ukraine.

A native of Kharkiv, Mr. Bleyzer graduated from the Kharkiv Institute of Radio Electronics with Master’s Degree in Engineering in the field of digital electronics and quantum physics. In 1978 he emigrated to the United States and in 1981 became an American citizen.

In the USA, Michael Bleyzer began his career in finance and management. Over 15 years of experience in the Exxon and Ernst & Young he has held operational, administrative and executive positions in Texas, Louisiana and in Europe.

“Romania and Ukraine have solved their bilateral problems by using only peaceful and civilized processes. We can be an example of solving differences in the 21st century”