Recently, negative phenomena in the Ukrainian-Polish relations have become much more frequent. And, we do not mean politicians and officials — in that sphere, as a rule, there is mutual understanding between the political elites of both societies. Both, in Ukraine and in Poland, the elite are convinced that there is no alternative to good Ukrainian-Polish relations for the sake of the success of both nations. That is why instability points do not arise in political elites, but among the population, since there is a gap between the people and the elite on both sides. It has been so for the last 1–2 years. It is important to emphasize here that the terms “political elite” and “government” do not always mean the same.

Recently, on 28 April 2017, almost for the first time such a “people’s” action was held on the eve of the operation “Vistula” already with the participation of local authorities and resulted in the destruction of the monument to the UPA warriors in the cemetery in the Polish village of Hruszowice near Przemysl. It should be noted that before that for a long time various provocations in Ukrainian-Polish relations in the territories of both states had been growing increasingly. Unfortunately, these phenomena were not given analyzed properly and effective measures were not taken in the context of the rapprochement of both ethnoses.

Dismantling of the Ukrainian UPA monument in the village of Hruszowice

A similar situation took place in the late 1930s — early 1940s in Halychyna (Galicia). The Poles and Ukrainians’ living together at that time could even be considered a model for the coexistence of different ethnic groups, languages, religions, etc. in the same state. Ukrainians respected “Polish” holidays, Poles — “Ukrainian” ones, etc. But since 1937, the situation began to deteriorate noticeably, in particular, because of the emergence of confrontation between the Greek Catholic/Orthodox and the Roman Catholic churches. Ukrainians began to ignore “Polish” holidays and vice versa — there were restrictions for Ukrainians in getting education in their native language, etc. Already then, thinking people understood that such phenomena were probably provoked by the “third” — interested party. One can only assume that the Ukrainian-Polish confrontation is beneficial to totalitarian regimes (be it communist or fascist — does not matter). In this context, at first glance, the coincidence of the above-mentioned events in Western Halychyna with events in neighboring countries is surprising: in 1937, the tragic events in the Stalinist USSR began simultaneously with the enslavement of Europe by fascist Germany. And then the Second World War began with its horrors, resettlement and further enslavement of Ukrainians, Poles, etc. In a word, the last thing anybody could think of at that moment was an objective analysis of the Ukrainian-Polish relations and appropriate measures to improve them.

Unfortunately, due to these and other circumstances, neither the official, nor the middle, not even the highest levels of both societies had left reliable information about the events of those years. I am saying this with full responsibility, since I am the son and grandson of immigrants from Lubaczow and Jaroslaw (now Poland), and I know a lot from sincere stories of the participants of those events. Until recently, this was almost the only source of obtaining more or less objective information about the events of that time from the Ukrainian side, since our respective protocols and statistics were either destroyed or never existed at all. It must also be borne in mind that there are very few direct witnesses of those events. And eventually there will be none…

The situation changed significantly after Ukraine gained independence. Let’s pay tribute to the President of Ukraine L. Kuchma, who regulated the situation together with the President of Poland A. Kwasniewski, and the President of Ukraine V. Yushchenko and the President of Poland L. Kaczynski who took part and systematically initiated the resolution of all issues of Ukrainian-Polish relations. Target meetings at the highest level in the period of 2005–2009, in particular, to eliminate problems between the Ukrainian and Polish societies, were organized much more often than it was reported in the media. Most likely, that ‘s how the opening of the questionable monument to the UPA in Warsaw was suspended.

At that time, executive mechanisms “from top to bottom” (from the President to the average citizen) were functioning almost flawlessly, work was carried out, in particular, among the population in order to prevent the development of negative phenomena, for example, such as those now taking place in the village of Hruszowice. In general, the necessary information was submitted to citizens in such a way that they perceived it at the subconscious level. At first glance, such processes were just happening. In fact, it was a well-organized, tense and coordinated work of many analytical centers. As a result, despite all the talks now, but during that period there were no undesirable phenomena in the Ukrainian-Polish relations. Now we can only say that the measures taken were not irreversible and have not been working until now, and the mentioned mechanisms “from top to bottom” have got unbalanced and in most cases are not workable.

In both communities there were, there are and there will be right-wing radical elements that promote intolerance towards all other ethnic groups. Actually, they probably were “activated”, are “activated” and will be “activated” by a third party trying to destabilize the society. It should be noted here that such “activations” from the side are effective when there is no sufficient and systemic counteracting. 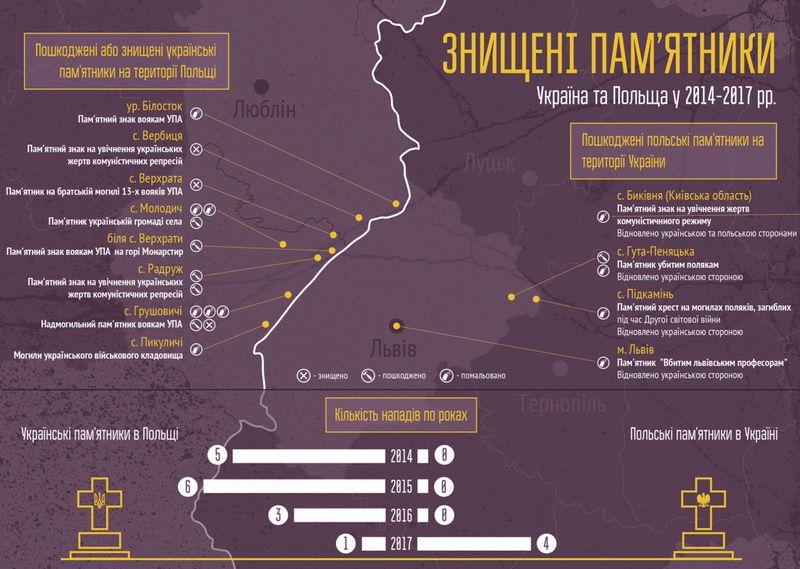 Provocative events, which took place recently both in Poland and in Ukraine, were connected, as a rule, with the symbols of both the peoples. Therefore, they were accompanied by an immediate reaction and to a large extent they distracted the community’s attention from more pressing problems. In particular, — national science and technology, which determine the development of both states. Today, Poland is proud (quite deservedly) of its reforms, GDP growth, standard of living of its citizens, etc. In particular, Poland has a higher standard of living than Ukraine, which causes migration. Although, compared to other European countries, the Poles live no better. Moreover, it is not clear what will happen in a few years. This is determined, first of all, by the development of national science and technology, which fact in both countries is not advertised.

Here it should be noted that the world, in particular, has not forgotten about the relatively recent successes of some states on the basis of foreign technologies in the 50s — 60s of the last century. Many of these states have not succeeded in using those achievements for their development, and now they have become “third world countries”. We also see that only those countries that have properly reformed and funded their science and technology have successfully developed. In recent decades, as well as today, neither Ukraine, nor Poland, unfortunately, in this aspect is a worthy example. In recent decades, they have hardly been reformed. Therefore, in this area, practically everything remains as it was formed during the time of the socialist camp. Both, in Ukraine and in Poland national science and technology are financed by an order of magnitude less than it is necessary for the successful development of both, them and the state as a whole. Therefore, it is not difficult to foresee what is in store for our states if these indicators are not changed for better.

It turns out that for the Ukrainian and Polish communities (as well as for others), the outrage over the past is, unfortunately, more accessible, simple and effective than an analysis of the reasons for that past. This is bound to lead to despair in a few years if today we do not take the necessary measures.

Perhaps, contrary to our interests, someone is very much against the joining of the efforts and opportunities of Ukraine and Poland (and even attracting other neighbors, for example — in the format of the Caspian–Black Sea–Baltic Arc), in particular, in science, engineering, technology, etc., for the sake of the prosperity of our multi-ethnic peoples and the world.

The observed in the Ukrainian-Polish relations is mainly characteristic of the relations between the Ukrainian nation and all its neighbors. And in each individual case, circumstances require specific creative work. Nothing will sort itself out. Every single case, in the context of manifestations of undesirable phenomena for us, is like a “time bomb”, which sooner or later reminds of itself — especially when it is beneficial to someone.

So, guided by the non-alternative nature of the Ukrainian-Polish friendly relations, within the framework of preventing negative phenomena, it would be expedient to urgently turn to the above-mentioned experience and to resume the corresponding preventive work taking into account the current realities and previous shortcomings. Obviously, someone will propose to create a new target structure. But it is not worth hurrying with new formations. Taking into consideration, first of all, the fact that during the time that has passed since the mentioned events not a single such structure has been destroyed. Considering the “effectiveness” of new formations, their “build-up” and many other things, it may perhaps be worthwhile to limit ourselves to resuming the effective work, to coordinate it with available means, to entrust targeted duties and responsibilities to the existing structures and figures, etc.