Some Learn from History, Others Choose to Ignore It

Now it is very hard to imagine in what sphere cooperation with Ukraine will be beneficial for Azerbaijan and in what, in particular, the Ukrainian ex-presidents will be able to make their Azerbaijani counterpart interested at the economic forum in Baku.

Perhaps in the traditional Ukrainian “cosmo-aircraft- agricultural set”, backed by the military industrial complex products? But with these proposals we are late, at least fifteen years. Azerbaijan has been developing the space theme in cooperation with the West, the agricultural sector is very important for Baku, but a promising market for its agricultural products it sees is so far in its partner Russia, where it is even ready to partially replace the recently departed thence Turkish supplier. Modern Ukrainian aircraft building production may be interesting to Azerbaijani partners only if it is exceptionally profitable, and technical superior over other products, primarily western manufacturers. Moreover, success of aircraft manufacturers today depends on a confluence of many factors in the international market. 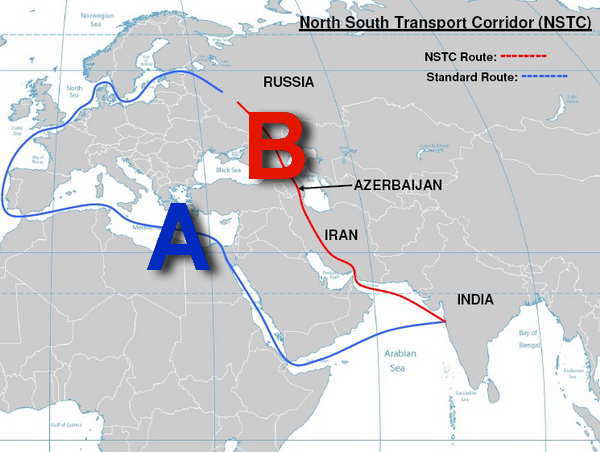 Last month there flashed a message that by the end of March Azerbaijan and Russia, within the framework of the development of the North-South International Transport Corridor (ITC), are organizing transit of goods to Iran and India. At the moment goods from India towards the European part of the Russian Federation are transported by sea (“A” route), the delivery takes 40 days. The new multi-modal “B” route will be used by the marine, rail and road transport, which takes half the time to deliver goods. Of course, the necessary means of transport for this branch of the “Silk Road” can me provided by the Russian side which not interested in sharing the market. Especially with Ukrainians.

But Baku needs weapons and military equipment for its armed forces, with regular border clashes with Armenian soldiers. Therefore, Ukrainian proposals could make Azerbaijan interested only when push comes to shove, as it now buys arms from Russians. However, this trade segment has its own features, especially when at stake, as a rule, are trading profits of the parties and the benefit of the buyer of the weapons… Besides, Azerbaijan is trying to arrange its own arms production, as I’ve already mentioned at the beginning of these notes. At this, it takes into consideration the bitter experience of its Kazakh neighbors, who at some point with the help of a third party failed to modernize their military equipment, and lost millions… 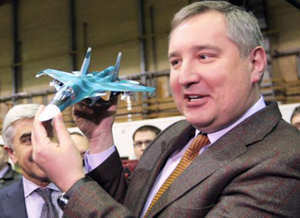 Interestingly, last Friday, Russian Vice-Premier D. Rogozin suddenly arrived in Baku for an urgent meeting with the Azerbaijani President. His unplanned visit was vividly covered in the media, as the Moscow team included officials from the “Rosoboronexport”, the Federal Service for Military-Technical Cooperation. Previously they had met with the Azerbaijani military and discussed the problems in the sphere of military-technical cooperation, in particular, the issues of implementation of previously concluded arms contracts. According to the Russian newspaper “Kommersant”, Azerbaijan is a major player in the arms market, and Russia is not going to lose it.

No wonder that in the press it was reported that under previously concluded contracts Baku purchased from its Russian partners Antiaircraft Missile Complexes “Tor 2ME” nearly a hundred of transport and combat helicopters, the same number of T-90 tanks and BMP-3, two dozens of Self-Propelled Artillery Launchers “MSTA-C”, Multiple Launch Rocket Systems “Smerch”. Allegedly, most of the work under the contract has already been completed: in 2015, Azerbaijani military servicemen received the last 6 out of the 40 ordered in 2010 Mi-17V1 helicopters.

Russian businesses now have to supply the Azerbaijanis with some tanks, infantry fighting vehicles and artillery systems and to get the customer’s long-promised under the contract, but still not paid money. Because of the existing international sanctions, Russia’s treasury is nearly empty, and for the Kremlin every ruble counts. By the way, in September last year, also all of a sudden, Baku was visited by the Russian Foreign Minister Sergei Lavrov, who suggested Azerbaijan should buy a batch of Russian weapons. “It looks like Rogozin has decided to “gang up” on Baku and to conclude a major deal”, suggests the Armenian lragir. But Azerbaijani experts state, Rogozin came not to chase up a debt, but on behalf of the Russian leadership to reassure Baku, which sharply reacted to the Armenian-Russian cooperation “at the anti-Azerbaijan direction”.

Don’t forget that Russia gave Armenia a loan of 200 million US dollars for the purchase of Russian weapons (for a period of 10 years with a grace period until 2018) and Armenia will “buy Smerch Multiple Launch Rocket Systems and ammunition for them, SAMs Igla-S and rockets for them, Ground-Based Electronic Intelligence Systems “Autobase-M”, Heavy Flamethrower Systems TOS-1A with TZM-T Reloading Vehicles, Guided Missiles 9M113M, Grenade Launchers RPG-26, Detonators B-429E, Dragunov Sniper Rifles (SVD), armored vehicles, armored cars “Tiger”, engineering equipment and means of communication”, and so on, and so forth. 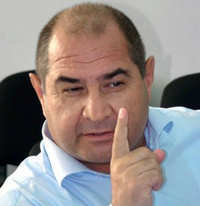 That is why Baku has officially, at the level of the Foreign Ministry, expressed its discontent to Moscow. “Perhaps Rogozin seeks to bring the military-technical cooperation between Azerbaijan and Russia to a higher level?” suggests the Head of the Azerbaijani Center for Political Innovations and Technologies, political scientist Mubariz Ahmedoglu. And how, after such words, we can’t help remembering the famous expression that “the gun hanging on the wall in the first act is sure to shoot in the last act”. That is, for the weapons concentrated in the Caspian region, sooner or later “Z-hour” will come. And the reason could be a most incredible, but — as a must — in keeping with the spirit of today’s “hybrid” wars. At the upcoming meeting of Foreign Ministers of Azerbaijan, Iran and Russia, this subject will be given due attention. In the future, the topic will be discussed at a higher level of these parties. There will be at least joint memorandums. But again, all this is a political game and geopolitics.

But here are some, albeit indirect, but facts: in February of this year, military servicemen of Azerbaijan’s armed forces have been taking part in the six-months course for senior command and staff officers and commanders in Istanbul. And now quite direct facts: this year a detachment of Russian combat ships of the Caspian Flotilla will visit the ports of Iran, Azerbaijan and Kazakhstan. Note the current priority task of the Russian Flotilla — participation in joint international Kazakhstan-Russia naval drills and in “Caucasus-2016”strategic command-and-staff exercises. It has been voiced by the Caspian Flotilla Commander Rear Admiral Igor Osipov. According to him, the warships will visit ports of Bandar-e Anzali of the Islamic Republic of Iran, Aktau port of the Republic of Kazakhstan and Baku port of the Azerbaijan Republic “to participate in the international naval exhibition “Adeks-2016”. Clearly, Russia persistently takes the view that only its military superiority can guarantee peaceful coexistence between the Caspian countries. But somehow its forcing the parties to a peaceful co-existence looks ugly, as with its peaceful “ wood felling”, not just “chips” are flying about — “poles” of statehood of entire peoples are being rooted out. There are enough facts in history.

Interestingly, the recent assumptions of Ukrainian analysts about the possible in the nearest future military confrontation between Moscow and Baku, were met by Azerbaijani experts with a significant degree of skepticism and even bewilderment. They explain that any financial and economic “skirmishes” between the sides would be automatically settled and eliminated as soon as oil prices start growing. Political matters will go smoothly, as soon as Azerbaijan gets back the occupied by Armenia (or Russia?) lands. This is firstly. Secondly, in Baku they are firmly confident that without Azerbaijan the Kremlin will not establish practical cooperation with the Islamic world of the Middle East. Besides, the Caspian Sea is not the Black Sea with its Crimean Peninsula, where there was a need for “referendum” in the presence of polite “little green men”. This is thirdly.

That is, the Azerbaijani experts believe that the future of their country is not threatened by anything. But, being happy with the policy of their leadership in the country and in the international arena of international relations, they do not speak or do not wish to speak about the fact that Azerbaijan is now at the crossroads of two worlds, and acts as a gasket between the Christian Russia and the Muslim Middle East, where in full play are global-scale combat actions. It actually is located between the coalitions, pursuing different goals. And one way or another, but it will have to decide which side is more acceptable to it, since for all its caution, for all its geopolitical “zigzags” and statements about the independent path of development, Azerbaijan, unlike Switzerland, will not be able to maintain a good relationship with all partners at the same time. Each of these partners has its own plans and ambitions, because of which even the reached at the highest level agreements are usually short-lived and in fact nominal. Like turned nominal for Ukraine the Budapest Memorandum and Minsk Agreements. 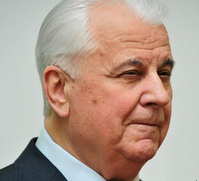 Perhaps this was meant when Leonid Kravchuk promised to prepare Ukrainian proposals to Baku? However, it would be nice at this to remind the Baku colleagues that the signed Memorandums on Disarmament are nothing else but a surrender to the mercy of the apparent or potential enemy. And only the signed agreement not prohibiting military equipment and weapons will be useful to the country and will enlarge the circle of its friends, associates and allies.