December 19, 2015 the media reported about an accident at the second unit of the Leningrad Nuclear Power Plant with emissions of steam.

Mind you, the LNPP is one of the three Russian nuclear power plants, where RBMK (High Power Channel-type Reactor) are installed and operating. A characteristic feature of the RBMK reactor is the presence of one circuit. That is, they are similar to those mounted at the time at the Chernobyl Nuclear Power Plant. Two nuclear power plants with the same RBMK are now working in foreign plants: in Lithuania (Ignalina NPP) and in Ukraine (Chernobyl NPP). The Lithuanian one has been shut down at the request of the European Commission. While the Chernobyl NPP has actually “closed itself” with tragic consequences. 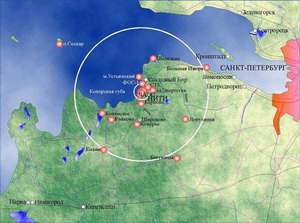 It should also be noted that at the Leningrad NPP accidents have already happened with the ejection of steam, usually radioactive. The truth always becomes known a little bit later…

These three factors, as well as the memory of the Kremlin’s lies in 1986 about the “absence of radioactive emissions from Chernobyl”, cannot help causing concern over the current accident. In order to make more specific conclusions, it is necessary to have sufficient information. There is too little of it. To tell the truth, there is no information at all. So all we can do is monitor information, given by stations of analysis of radioactive pollution from other countries, first of all from the neighbors of the Russian Federation in the zone of the accident.

To tell the truth, and steam that flew out due to the damage of the pipeline on the RBMK reactor, may have been either radioactive or non-radioactive. Unfortunately, more often it is radioactive. But, I repeat, to make an objective conclusion about the current accident on the second block of LNPP, one needs the true information from the Russian Federation (which we can’t expect at least during the first days after the accident), or information on the radioactive pollution of the environment from the countries that can be trusted.