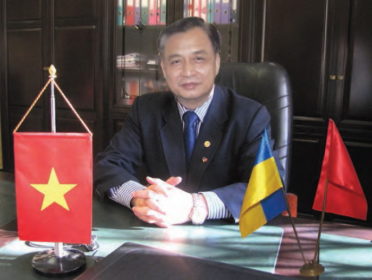 — Dear Mr. Nguyen Anh Tuan, this month marks two years since your appointment as Ambassador to Ukraine. Presenting credentials to our President in 2017, you said, in particular, that relations with Ukraine are very important for Viet Nam, and they should be actively developed in all directions. In your opinion, are the relations developing properly and is the potential for such development used to the full?

— Viet Nam has good relations with Ukraine in many spheres. I am glad that our countries have succeeded in working together in the spheres of economics, culture, education and science in the past years. And I consider trade the most effective sphere of such cooperation. Since 2017 and to this day, the trade turnover of both countries has been steadily increasing, amounting to over US$500 million. Today, Viet Nam is among Ukraine’s five largest trading partners in Asia (after China, India, Japan and Indonesia). Viet Nam is interested in Ukrainian technologies and education. Recently, our companies have taken the opportunity to acquire Ukrainian technologies for the production of titanium powder and peat briquettes. Our cooperation in education is also quite promising. This is confirmed by the considerable number of Vietnamese students studying at Ukrainian higher education institutions.

— I remember that one of your first steps in this post was to establish, for example, the exchange of agricultural products, which was hampered by the lack of permits for Ukrainian imports. Does the current status of such documentation raise additional questions now? That is, does everything satisfies the Vietnamese side now?

— To begin with, one of the most important events in bilateral economic cooperation was the successful organization of the 14th Intergovernmental Committee. We have signed many agreements that eliminate barriers to trade and economic cooperation, especially to agricultural products trade. For example, Viet Nam has lifted the ban on imports of Ukrainian wheat and opened its markets for some products of Ukrainian vegetable and animal origin. However, much has to be done by both our countries to prepare documentation to further facilitate agricultural products trade. We should find an effective decision under which we will negotiate and sign a free trade agreement (FTA) between two countries.

— Recently in Ha Noi, the capital of Viet Nam at the 8th session of the 14th National Assembly, the implementation of the country’s socio-economic development plan was analyzed. It was announced that the plan was practically implemented, in particular, this year (2019), GDP growth is even exceeded some indicators and reaches more than 7.00 %. But it was also pointed out that it was necessary to further restructure the economy, update the models of economic development, and develop economic and industrial zones. And especially — to develop the private sector of the economy. How important is such a step for your country? And is the people of Viet Nam ready to support this direction of economic development? 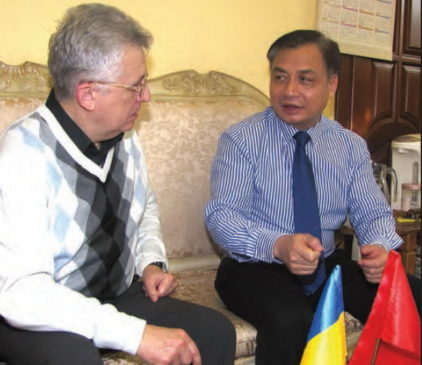 — Over the last three decades, our economy, which is considered one of the most dynamic in Asia, has been continuously and actively developing, on average by almost 7 % per year. However, for its long-term and sustainable development, it is necessary to create, so to speak, new qualitative and efficient locomotives of its growth, the basis of which should be productivity, human resource and savings of people.

To create such new resources, the Government of Viet Nam recognizes the need to restructure the economy, to reform these growth models, for example by moving from a growth model based largely on resources and labor to a model relying on science, advanced technology and a highly educated work force.

The Vietnamese government also sees the private sector as a new engine of growth in the time of rapid and sustainable development, and resorts to substantial and promising strategies in this sphere. The private sector currently accounts for 70 % of GDP and 95 % of the work force.

— Another interesting question: the leadership of Viet Nam has decided to improve the efficiency of state administration. Why now of all times and for what reason? And what is the background of the activity of your Central Steering Committee for Anti-Corruption?

— Corruption and fighting it is a quite serious and, I would even say, burning problem in Viet Nam. Corruption threatens the existence of the Communist Party, the state and the socialist system. It is also the most urgent problem that can adversely affect the country’s building and development. Therefore, countering corruption and fighting it is crucial for further development of the Vietnamese society.

In 2005, Viet Nam adopted the Anti-Corruption Law, which was also amended in 2018. The Politburo of our Communist Party has created a Central Steering Committee for Anti-Corruption, headed by the General Secretary of the Party and the President. Responsibility for fighting corruption rests with three main bodies: the State Inspectorate, the Supreme People’s Procuracy and the Ministry of Public Security. This confirms Viet Nam’s strong commitment to fighting corruption.

— Some of your citizens, like many Ukrainians, have to work abroad. Once (60 years ago to be exact), in Viet Nam was created the State Committee for Overseas Vietnamese Affairs. How legal is their work, and how is it perceived in your society?

— Over the 60 years of its development, the State Committee for Overseas Vietnamese Affairs did make some progress. From the interdisciplinary association that was mainly concerned with stabilizing the lives of those who was coming from abroad, the Committee has become an important agency of the Ministry of Foreign Affairs and effectively performed its role of providing consultancy to the Party and the state and implementing policies related to Vietnamese people abroad.

The Committee has elaborated and initiated the implementation by the Communist Party of Viet Nam and the state of a number of policy guidelines that are of strategic importance to citizens outside our country. The Committee also led the movement of mobilizing overseas Vietnamese to support the homeland and contribute to the cause of national liberation in the past as well as leads movement for national construction and defence today. The Committee is also directly responsible for the return of the Vietnamese to their homeland.

The Committee also organizes important events that are highly valued by overseas Vietnamese. These include the Vietnamese language training courses, the Homeland Spring, the Summer Camp for Young Overseas Vietnamese and so on. These help them keep in touch with their homeland. There has also been a lot of positive activity in mobilizing the mental potential of the foreign Vietnamese community.

By the way, about 4.5 million Vietnamese now live in more than 100 countries, mostly developed ones, with economic centers and high scientific and technological development. And this State Committee is nothing other than a bridge connecting the overseas Vietnamese community with the homeland and helping strengthen national unity and establish relations of the host country with Viet Nam. Overseas Vietnamese watch closely the life in their homeland, considering themselves an integral part of it and contributing to its socio-economic development and at the same time trying to promote the cultural identity of our country in foreign lands.

— Another interesting topic is the national composition of Viet Nam’s society. Among the hundred million people in your country there are more than 50 ethnic groups and nationalities, and such an important structure as the Vietnamese Fatherland Front recently celebrated its 89th anniversary. How is the right to national development and observance of cultural traditions guaranteed in your country? And how are problems of this kind resolved if they suddenly arise? 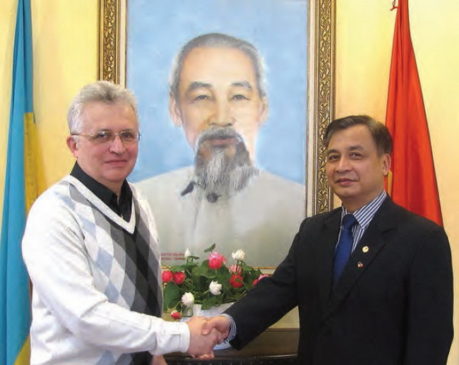 Over the 89 years of its development, the Vietnamese Fatherland Front has made a significant contribution to the Vietnamese revolution as an expression of the aspirations of the people. Nowadays, with the development of democracy, the Front continues to unite representatives of all strata of the society, upholding patriotic traditions, bringing together Vietnamese and foreigners, various social and ethnic groups, religions in order to defend national independence and social stability, and to successfully fulfill the tasks for further national development set up by the leadership of Viet Nam’s Communist Party.

In foreign policy, the Vietnamese Fatherland Front is establishing international cooperation under the slogan “Viet Nam is a Friend and Reliable Partner of all Countries in the International Community”. As an independent state, Viet Nam is constantly working to strengthen friendship and partnership between peoples, always advocating for peace, cooperation and social development.

— By the way, what about the language of communication of the above-mentioned ethnic groups: does it not present any difficulties for them?

— Each of these ethnic groups has its own language, and these languages are actually different. The groups also differ in numbers, in particular, there may be many hundred thousand people or more of each group. I should say that in their environment they are free to use their native language, but the state language is one for all of us, and there are no problems regarding its use. We are all one people of the Socialist Republic of Viet Nam.

— I am grateful for the honest answers to my questions.

The interview you can read in the “BINTEL” Geopolitical Analytics Journal, Issue 4, 2019