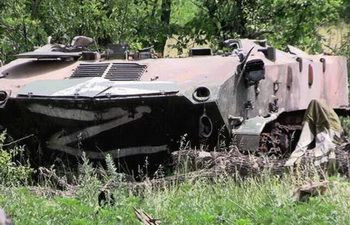 The Russian Federation has begun to bring the 1950s weapons to attack Donetsk region. Most of the relatively up to date modernized military equipment has already been destroyed in Ukraine. Moscow has to pull out old weapons. Military expert Ivan Sichen told about this in a comment to Gazeta.ua.

“At the beginning of the large-scale invasion, there was a saying that the Russian army was long, not powerful. The Armed Forces of Ukraine destroyed most of the relatively new military equipment of the Russian Federation. Russia could not produce enough modern weapons. It was all modernized. In reality, it was an old weapons. Most of that military equipment is now destroyed in Ukraine. Therefore, Russia is forced to pull out the old one. For couple of months, it was the armament of the 1960s and 1970s. The Russians are using T-62 tanks in Zaporizhzhia and Kherson regions. They are 50–60 years old. Now they have begun to remove from storage the weapons of the 1950s. The same MT-LB are tractors that were intended for transportation, and now they use them as combat vehicles”, says Sichen.

The Russians are also forced to use old missiles, which are less accurate and cause more damage to civilian objects, the expert emphasizes.

“There are Kh-22, for example. They are not accurate. They hit residential buildings. These missiles from the 1950s and 1960s fly anywhere”, says Sichen.

Russia has some victories in the battle of the Donbas. Now the Russian Federation will use all its forces to occupy Donetsk region, the expert adds.

“Moscow managed to capture Sievierodonetsk and Lysychansk. But its army suffered critical losses. The Russians are trying to advance on Slavyansk and Kramatorsk. The Armed Forces of Ukraine have destroyed Russian thanks by modern weapons from the West. Now we can inflict devastating blows on the Russian troops on the entire front line”, Sichen clarifies.

Russia is forced to reduce the scale of the offensive, the expert explains.

“They should advance in order to disrupt our counteroffensive. Western supplies of weapons — long-range artillery, missile systems — have led to the fact that we are able to stop the enemy. To curb his offensive potential. To turn the Russian rear into the front line. The Russians are fleeing their bases, where we strike”, says Sichen.

“Long-range howitzers, missile systems that can hit distant targets. More air defense and tanks. And we will be able to defeat Russia. The West should not be afraid of a direct military confrontation with the Russian Federation. Because Moscow itself is afraid of it”, adds Sichen.