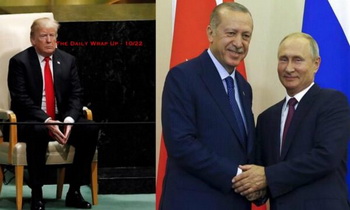 Recent events in Northern Syria and the traditionally weak, inform geopolitical response to them by leading EU and NATO countries, including Germany, confirm that the current collective security system cannot withstand the onslaught of brute force and the bold use of force to resolve international disagreements. Russia and Turkey, despite some contradictions and interstate disputes, immediately found common ground and joined efforts to achieve dominance in Northern Syria. The traditional instruments of the international community have proved incapable and unable to interfere with the distribution of geopolitical influence of the two main hawks of nowadays — Russia and Turkey.

The USA’s self-removal position adds to the intensification of international legal nihilism and impudence not only from Russia but now — from Turkey. This the USA’s policy of facilitating geopolitical interests of the main disturber of international stability — Russia — will be an important destabilizing factor in the system of international, interstate relations and geopolitical coordinates.

As for Ukraine, at the next NATO summit in London on December 3–4, 2019 it would be appropriate for Kyiv to raise the issue of the prospect to participate in Membership Action Plan, fulfill a number of conditions for accession and confirm the stability of the course taken to participate in the collective security system on the European continent and in the world. Particular direction in the London summit may be a strong refutation of Russia and its satellite countries’ attempts to create in Europe an image of Ukraine as a hopeless country with an extremely high level of corruption.