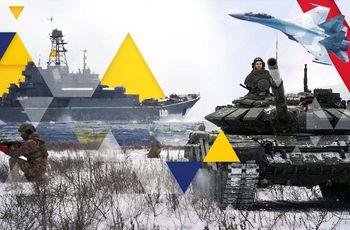 Russia’s Black Sea Fleet ships are already afraid to approach the Ukrainian border. When the Armed Forces of Ukraine liberate Kherson, they will be able to destroy the remnants of the Russian fleet in the occupied Crimea. This was in a military analyst Ivan Sichen’s comment to Gazeta.ua.

“Russian ships are already afraid to approach the Ukrainian shores. We first defeated their garrison on Zmiinyi. Then we sank two patrol boats. We sank the cruiser Moscow. We destroyed two Russian ships in Berdyansk. If what is left comes near, the Armed Forces of Ukraine will also destroy it. We have seen how ingloriously the Black Sea Fleet is fighting. Russia has always seen it as a major force against Ukraine. It played a crucial role in Russia’s capture of Crimea. It was a means of dominance in the Black Sea region, projecting force into the Mediterranean region. Now this fleet is almost destroyed. It is no longer 2014 and we can sink Russian ships. Especially when new weapons arrive”, says Sichen.

Ukraine will return Zmiinyi Island, says the analyst, and explains why this island is important.

“He, who controls Zmiinyi, controls the entrances to the ports of Odesa. This is a 24-mile contiguous zone (an area of sea, in which the coastal State may exercise the control under international maritime law. – Gazeta.ua). He, who controls the island, can decide whether to allow ships or not, to conduct economic activities there. At the beginning of the invasion, the Russians destroyed our border guard garrison. And now we have, in fact, destroyed the Russian one, which they deployed there. We will return there at the first opportunity”, says Sichen.

The war will spread to Russia and Russians should be afraid of this, the analyst adds.

“In the same Sevastopol there is a base of the Black Sea Fleet. There are two huge ammunition depots. When we release Kherson, we will be able to strike at this base. And the Russian fleet will be completely destroyed. After that, we will regain control over both Zmiinyi and Crimea”, Sichen emphasizes.