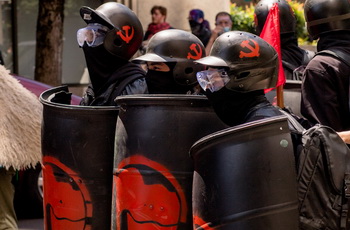 The United States Will Be Designating ANTIFA as a Terrorist Organization

The events of the mass unrest in the streets of the United States, provoked by the death of an African-American from excessive police brutality, have  not gone unnoticed by the European media.

Protests against racism and police arbitrariness continue all over the United States. Initially, the protests were peaceful and consisted mainly of acts of civil disobedience and blockade of highways. However, there were clashes and pogroms, and in dozens of US cities, protesters and police acted brutally.

US President D. Trump has blamed the left-wing radical movement ANTIFA as co-responsible for the riots and called it a terrorist organization.