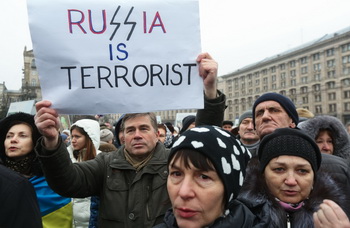 The new security realm in the current, multifaceted world keeps generating new threats and challenges, including in the fight against terrorism. This, in turn, obliges relevant special services to constantly modify and change the forms and methods of their work in order to minimize the risk of a terrorist threat. Ukraine in this regard is no exception: on March 5, 2019, Ukrainian President P. Poroshenko approved the new Concept of the Fight Against Terrorism.

What caused the need for change?

The need to revise the principles of the fight against terrorism in Ukraine has been spoken about at least since 2014, when the security environment began to change dramatically due to Russia’s aggression in the Crimea and the Donbas. Our previous Concept of the Fight Against Terrorism from 2013 was outdated, that is it largely did not meet new realities. If nothing else, a confirmation of this is the fact that in the Global Peace Index, which is being developed to determine the level of vulnerability of states to (from) terrorist threats, Ukraine, with the beginning of Russia’s armed aggression, has shifted from the 51st (in 2013) to the 21st (2018) place among 163 countries. Of course, one can argue about the methodology of the study, but in general, the trend recorded in the index is true.

Since in 2013, when the previous Concept of the Fight Against Terrorism was adopted, the Ukrainian leadership did not perceive Russia either as an enemy or as a potential source of a terrorist threat, the focus of the document was on countering radical Islamist organizations, which in general coincided with a dominant trend among Western partners of Ukraine, in particular NATO. At that time the world was still recovering from the effects of the renaissance of political Islam during the Arab Spring and the surges of terrorism in Syria, Libya, Yemen and other Middle Eastern states with some incidents outside the region.

Nevertheless, given Ukraine’s being a sort of “periphery” for the Islamic world, the previous Concept of 2013 rightly stated that it did not belong to states with a high probability of terrorist acts. Similarly, having in mind first of all Islamic structures, there were no preconditions for the emergence of a terrorist movement based on own Ukrainian Muslim communities.

Further practice has shown the validity of such a statement. Both, before and after the adoption of the Concept, we managed to avoid Islamist movements’ terrorist activity in the territory of Ukraine, and to minimize the use of the Ukrainian territory as a field for recruiting militants for other “hot spots”. First of all, I mean the zones controlled by the so-called Islamic State (ISIS) in Syria and Iraq and in the Sinai Peninsula in Egypt. In the above-mentioned ISIS, the number of recruits from Ukraine never exceeded several hundreds, mainly from among the Crimean Tatars and newly converted to Islam representatives of Slavic peoples. Nevertheless, cases of use of Ukraine as a transit country for the transfer of such persons from third countries to conflict zones were recorded.

At the same time, given Russia’s hybrid aggression, which manifests itself in the form of sabotage and terrorist acts, the need to revise the basics of countering terrorism was obvious. Therefore, the new Concept, without abandoning completely the key principles of the fight against terrorism, set out in the previous document, greatly expands the list of tasks for state bodies involved in the fight against terrorism in Ukraine.

The new Concept of the Fight Against Terrorism considers Russia’s aggressive policy, aimed at destabilizing the situation in Ukraine, the main threat. This, in turn, means a slightly different approach to the matter, since the motivation for non-state terrorist actors’ activity differs greatly from that of state oriented, or subversive groups under the cover of non-governmental terrorist organizations. While in the former case the main target of terrorists is, as a rule, information resonance, and at this they focus on the number of victims among the civilian population, in the latter they also aim at destroying the infrastructure, critically important for functioning of the state, or personnel.

In view of this, the new Concept expanded significantly the list of objects that may be the target for terrorist attacks. To their classical list are added authorities and local self-government, information space and its components, objects of transport infrastructure.

At the same time, in the document, the factors influencing the growth of terrorist threats include those which at first glance have only a mediocre relation to this phenomenon: intensification of separatist movements in Ukraine, internal migration processes, aggravation of the global migration crisis, international organized crime’s increased interest to our state. It would be naive to deny the destructiveness of all these phenomena, and fighting against them requires different approaches, but ignoring them allows the aggressor state to strengthen its positions in Ukraine and, after that, to take measures to destabilize the situation.

Besides, at least at the declarative level, the new Concept gives up cooperation with the CIS countries in fighting against terrorism. In this regard, an important innovation is giving up the use of civic associations and non-state securities in the anti-terrorist activity, the cooperation with which was identified as an important aspect of the 2013 Concept. As shown by the practice of hostilities against the RF in the Donbas, Russian special services actively used these particular subjects to destabilize the situation in Ukraine. The maximum proposed by the new Concept is the introduction of effective mechanisms for encouraging individuals and legal entities to cooperate with counter-terrorism actors.

Another innovation is the abolition of democratic civilian control over the activities of counterterrorism actors, which was introduced in the 2013 Concept. Although the updated document emphasizes the priority of respect for human rights, but there are no points regarding any third-party supervision over the actors that counter terrorism. At the same time, given the existence of such control by the Verkhovna Rada and the President of Ukraine, according to the Law of Ukraine “On Fighting Against Terrorism”, this fact can be considered positive.

As already noted, the basis for the new Concept is the document from 2013, from which many articles, that do not need additional comments, “moved” into the new one. So let’s turn our attention only to innovations. Apart from the need to counteract the aggressor state as a source of terrorism, they are due to: the progress of technology and its spread among the population, which, among other things, poses a risk of involvement of individuals in terrorist activities, or at least in assisting terrorists. First of all, it is about people who can be used in one way or another by Russia.

Thus, in order to minimize the terrorist threat, it is planned to intensify work on three new directions:

Strengthening institutional capacity. Improving coordination of the activity of counter-terrorism actors with the Anti-Terrorist Center under the SBU, optimizing their tasks, taking into account the ATO’s experience in the ORDLO. Besides, introduction of mechanisms for interaction and exchange of information between actors in the fight against terrorism and other state bodies. Realization of these goals should eliminate the eternal scourge of special services — inter-agency competition.

Working with the population. Using progressive forms and methods in informative, educational, and preventive work, such as in the implementation of specialized programs aimed at preventing the spread in the society, in particular among young people, of extremist views, strengthening the control of migration processes, and improving the struggle against illegal migration. All this will limit infiltration of potential terrorists into the territory of Ukraine and will narrow the space for their activity within the state.

Working with new technologies. Strengthening state control over the manufacture, import, registration and use of UAVs that can be used during terrorist attacks, improving methods and algorithms for the search and processing of information on the Internet, in particular, in the Dark Net, concerning persons involved in terrorist activities and sources of financing terrorism. Potentially, this direction may be the most problematic, given the need to attract significant resources to eliminate these threats.

A large number of measures outlined in the new Concept, has been implemented since the very beginning of Russia’s aggression. Nevertheless, as shown by the introduction of martial law, there are still significant shortcomings, especially regarding the security of objects, vulnerable to terrorist attacks. The new Concept introduces a systemic component, which, if desired, will allow to promptly eliminate these shortcomings. At the same time, it should be noted that the adoption of the document which is so important for the national security of Ukraine in the fifth year of the war is a significant drawback of the entire system of fighting against terrorism. Nevertheless, as our justifying saying goes: better late than never.