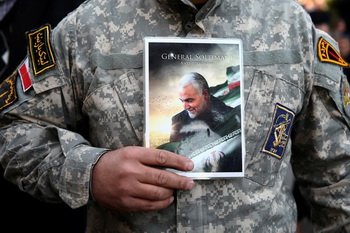 The Quds Force Commander’s death will in no way weaken Iran, but will affect the situation in the Middle East

January 3, 2020, news agencies of the world spread the news about the death of Major General Qasem Soleimani, Commander of the special “Quds Force” of the Islamic Revolutionary Guard Corps (IRGC) of the Islamic Republic of Iran. Certainly, the blow is quite strong, but in no way will it weaken Iran and in some way will affect the whole situation in the Middle East.

In fact, General Q. Soleimani, with all his authority and influence on the Iranian domestic and foreign policy, did not play the first role, but not the least either. He could, under certain conditions, be considered the “architect” of Tehran’s expansionist policy. But above all, he was the instigator and executor of the will of Supreme Leader of Iran Ayatollah Ali Khamenei. It is important to understand that Q. Soleimani was not a greater “terrorist” than any head of the special service of any state that controls the organization and conduct of covert operations abroad, within his powers. Otherwise he would not have become the head of such a service.

It should also be understood that the death of Q. Soleimani is a consequence of the key problem of the clerical regime that drives the “Shia Crescent” policy. It is commonly believed that the economic, political and social crisis in Iran is the result of Western and US sanctions. Partly this is true. But the sanctions themselves are a response to Iranian politics, and thus all the time we return to the issue of the clerical regime’s policy, which generates all the country’s problems, both inside and outside it.

The death of General Q. Soleimani may affect not only the situation in the Middle East region, but also the election campaign of D. Trump, since most Americans do not support the very idea of war and the USA’s participation in it.

On the other hand, in case of further escalation of tension in the region, Israel, the UAE and Saudi Arabia, who support Washington’s anti-Iran policy, having found themselves at one step to the war, will think hard whether they should be embroiled in a war with neighboring Iran, which may hit them badly despite the presence of US troops in the region.

If there is a version of the US Democrats’ alliance with Iranian politicians, then it is likely that Tehran should not expect a rapid, large-scale response.