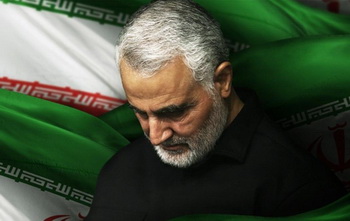 The death of Major General Qasem Soleimani, Commander of the Special “Quds Force” of the Islamic Revolutionary Guard Corps (IRGC) of the Islamic Republic of Iran, as we have already mentioned, later caused a number of events that in some way affect not only Iran but the whole situation all over the Middle East.

It is time to analyze the aftermath of General Q. Soleimani’s death. We cannot state that Iran is a country with unpredictable policy in the region. This is not true at all. Lately, Tehran has won several victories in the diplomatic sphere, having outgamed the West. Iran’s top leadership is extremely pragmatic and consistent in its policy in the region, while ignoring internal needs of its population. The reason for the current situation in Iran lies in the IRGC. The IRGC’s role and place in the country is the problem. The matter is that the Iranian leadership has not, or could not create a reasonable balance between the political wing of the society which has to control the decision-making, and the armed formation that must be a policy instrument. Over time, the IRGC has taken over the economy, and all senior officials have been represented by the IRGC, and it has become the architect of the country’s domestic and foreign policies.

Today, the situation may be changing, it is pushing pragmatic political and economic elites to countering. In this situation, they can support the popular protest and will be ready to lead the process of removing the IRGC from total domination, which has become a real factor in destabilizing the situation not only in Iran, but throughout the region as well. It is not difficult to predict that in case of the population’s mass protests and actions of disobedience in order to change the regime, Iran will immediately get support from the outside.

So, the death of General Q. Soleimani undermined the situation in the Middle East and probably the USA’s reputation at the eve of the 2020 presidential election.

One more conclusion can be drawn from the current events: today’s conflict between the USA and Iran is not only an interstate conflict, but also, so to speak, inter-elite one.