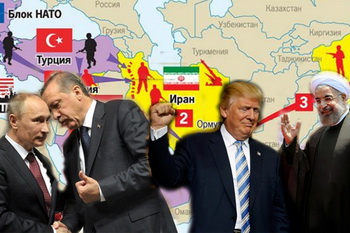 Geopolitical Aspects of the Conflict

“Borysfen Intel” has already touched upon the problem of another exacerbation of the situation in the Persian Gulf and the Middle East, which has created a threat of armed conflict between the United States and Iran (Islamic Republic of Iran, IRI) with the involvement of neighboring countries. At the same time, this problem has a deeper character and geopolitical consequences, for Ukraine included, and thus needs deeper analysis.

As you know, the crisis in the region was triggered by anti-American protests in Iraq late last year, including attacks on military bases and the USA’s Embassy in the country. In response, on the 3rd of January of this year, the United States conducted an operation to eliminate Commander of the special “Quds Force” of the Islamic Revolutionary Guard Corps of Iran Q. Soleimani, which aimed to demonstrate Washington’s determination to curb Tehran’s anti-American activity. However, this in no way restrained Iran, which not only did not succumb to pressure from the USA, but also took a tougher stance. Thus, on 4th January this year, Tehran announced its withdrawal from the 2015 “nuclear deal” with the EU, the USA, France, the UK, Germany and Russia, which had been blocking Iran’s creation of its own nuclear weapons. And on January 8, 2020, Iran conducted a number of missile strikes at US military bases in Iraq, which was openly interpreted as revenge for the killing of Q. Soleimani.

As expected, Tehran’s actions provoked the USA’s strong reaction. At the same time, US President D. Trump did not use force against Iran, instead, he limited himself to statements about toughening sanctions and declaratory statements about Washington’s determination to prevent the possibility of the IRI’s getting nuclear weapons. Moreover, in his usual “flirting” manner with US adversaries, D. Trump called for a new agreement with Iran that “that allows Iran to thrive and prosper, and take advantage of its enormous untapped potential”.

The USA and Iran’s refusal to intensify military confrontation between them, at least in open form, has created preconditions for reducing tensions in the Persian Gulf and Middle East. However, this has not diminished its conflict potential, which has deeper reasons and is the result of fundamental contradictions between different centers of power that have strategic interests in the region.

First of all, the struggle for influence in the region and access to its energy resources between the USA and Russia, and more recently — China. Iran has a special place in its efforts to reach the level of a regional leader. Besides, the situation in the region is affecting the interests of the European Union, Israel, Iraq, Saudi Arabia, United Arab Emirates, Kuwait and several other countries. At this, in the regional political arena, there has been a recent shift in the balance of forces in terms of the consistent weakening of positions of the USA and strengthening of its adversaries — Russia and Iran. The reason for this trend is a number of objective and subjective factors that have a decisive influence on the situation in the region. On the one hand, they are related to the failures of D. Trump’s policy, and, on the other, they are the consequence of Russia and Iran’s moving to a more active and aggressive policy.

For example, disagreements between these countries and their associations have repeatedly led to wars, armed conflicts and dangerous developments s in the Persian Gulf and the Middle East. For example, operations by the United States and its allies: the Desert Storm in January–February 1991 for the liberation of Kuwait from the occupation by Iraq and the defeat of the Iraqi army; Iraqi Freedom in 2003–2011 to overthrow the Hussein regime in Iraq and integrate the country into the sphere of American influence.

Besides, in the mid-2010s, there was a conflict in the Gulf region related to increased pressure from the world’s leading countries on Iran’s nuclear program. As a result of Iran’s resistance, another armed conflict in the region was narrowly missed. However, under non-favourable (for it) circumstances, Tehran did agree to the aforementioned “nuclear deal”.

In most of these cases, the United States was victorious, or in one way or another, achieving its goals. For example, as a result of the operations Desert Storm and Iraqi Freedom, the United States significantly strengthened its positions and military presence in the Persian Gulf and Middle East. This was mostly true of Iraq, where the pro-US government was brought to power and the US military bases were deployed.

At the same time, despite the change in power in Iraq and support for such changes by the majority of the Iraqi population, the United States faced significant challenges, which negatively affected US positions throughout the region. Such problems were caused by large-scale sabotage and terrorist activity, and in fact by guerrilla war against US troops in Iraq and the pro-American government of the country, initiated by supporters of the former S. Hussein regime and all sorts of Islamist groups. At this, they were openly supported by Iran and Syria and secretly — by Russia. As a result, the situation in Iraq turned into a protracted internal conflict, which was accompanied by an increase in anti-American sentiment at all levels — from the population of the country to its government.

Protracted also became the internal conflict in Syria which was the result of a clash of interests of the USA, and Russia and Iran there. For example, the USA’s efforts to overthrow the Assad government in Syria by supporting the moderate opposition and Syrian Kurds in the guise of conducting an anti-terrorist operation against Islamic extremists faced firm counteracting of Russia and Iran. This was another blow on American interests in the region.

The aforementioned problems became particularly acute after the election of US President D. Trump, who began conducting a chaotic and largely populist and inadequate foreign policy. In particular, this included the United States’ moving to confrontation with China, deterioration of US relations with Europe, “flirting” with Russia and decisions to reduce the number of US troops in Afghanistan, Iraq and Syria. The consequence of such actions was the weakening of the US positions in the international arena as well as in certain regions of the world, including in the Gulf region and the Middle East. At this, the White House’s failures in the foreign and domestic policies were used by D. Trump’s political and business opponents to begin his impeachment proceedings.

In turn, this caused more disagreements in US political circles, over the attitude to Iran included. For example, the US Republican Party supported D. Trump’s steps to intensify pressure on Iran, which he began in 2017–2018 (including the USA’s withdrawing from the “nuclear deal” with Iran and renewing sanctions against it). In contrast, the Democratic Party opposed such a policy of the United States of America.

All this was used by Russia and Iran to achieve a strategic revanche in the struggle for influence in the Persian Gulf and Middle East. Besides, Moscow and Tehran pursued a number of other long-term and ongoing goals. Such as further weakening of the USA and worsening of relations between it and Europe in the Middle East, as well as creating conditions for raising global oil prices by provoking tensions in the region.

At the same time, Moscow’s separate goal could be to distract the USA’s attention from Russia’s armed aggression against Ukraine and other problems in US-Russian relations. Today, this issue is of particular relevance to Russia in connection with the US congressional review of a new package of critical anti-Russian sanctions (so-called “sanctions from hell”).

In fact, Moscow and Tehran have already partially achieved their goals. For example, last summer, Russia and Iran took control of some of the Kurdish areas of Syria (including US military bases on their territory) left by US troops after the start of Turkey’s military operation to create a buffer zone on the Syrian border. As a result, the United States has actually lost Syria.

Even more negative for the USA were the consequences of the above-mentioned situation, due to the aggravation of the situation in the Persian Gulf and the Middle East. In fact, D. Trump’s actions testified to his administration’s inability to effectively confront Russia and Iran in the region. Despite the White House’s threatening with tougher sanctions against Iran and statements about the desire to avoid a military conflict, it has become quite evident that the USA’s authority has been diminished, along with its ability to defend its interests effectively. This is evidenced by the blatant and even brutal behavior of Iran, which openly demonstrates disdain for the USA and plans to finally push it out of the region. In fact, these plans were also supported by the Iraqi Parliament, which adopted a resolution demanding from the government to take steps to withdraw foreign troops from Iraqi territory.

The weakening of the USA’s positions in the region is also felt by its NATO allies. For example, the leadership of the Alliance agreed with the call of D. Trump to step up actions to fight terrorism in the Middle East. At the same time, Croatia, Slovenia, Poland, Germany, Canada and Spain have already begun withdrawing their troops from Iraq or have expressed such intentions. Besides, at the request of the Iraqi Government, the work of the NATO training mission in the country has been restricted. In addition, the split in the US Congress over the Iranian issue has become deeper. For example, the Democratic Party has called for limiting D. Trump’s powers in military decisions against Iran, which is another reason for the White House’s half-hearted and indecisive actions in the conflict with the IRI.

Of course, the above-mentioned circumstances are not a complete defeat for the USA, and are mostly related to the temporary decline in the effectiveness of US policy because of the particular political situation in the country. However, depending on the nature of the election campaign in the United States, we should not exclude the possibility of the White House’s tightening its position on Iran, with using military force against it included.

At the same time, the United States’ temporary problems will surely be used by Russia as part of the intensification of its foreign expansion, including on the Ukrainian direction. First of all, Moscow may intensify its actions to make Ukraine accept the Russian scenario of settling the Donbas conflict on the basis of the so-called Steinmeier formula.

In this regard, the period before the US presidential election in the autumn of 2020 may be critical for Ukraine, as the US support for our country will decrease due to objective reasons. Similarly will be reduced the influence of the USA on the EU member states’ compliance with their obligations to Ukraine. All this requires special responsibility and caution from Ukraine in conducting negotiations with Russia on the Donbas and other problems in relations between the two countries. Considering the current situation in the world, 2020 can really be crucial for our country.