Belarus and Ukraine Should Combine Efforts in Countering Russian Expansion

February 7, 2020 an international expert discussion “The RF’s Hybrid War Against Belarus” took place in Kyiv. The event was organized by the Non-Governmental Analytical Center “Ukrainian Studios for Strategic Studies” and the Solidarity Movement “Razam” (Belar. — “Together”).

During the meeting, representatives of Ukraine and Belarus discussed the essence of the Russian Federation’s hybrid war against Belarus, a threat to both states and the region as a whole.

At the invitation of the organizers, the President of the Independent Analytical Center for Geopolitical Studies “Borysfen Intel” Victor Hvozd spoke before the participants of the conference on the forms and methods of Russia’s “hybrid war” against Belarus. 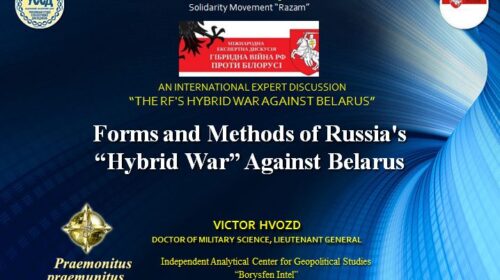 Our meeting today is devoted to the analysis of an important and relevant topic concerning the methods of Russia’s actions to restore its control over the post-Soviet territories. Such intentions of Moscow directly affect the interests of all former Soviet republics, which are paramount objects of Russian expansion.

This, in turn, requires an adequate understanding of the mechanisms for Russia’s implementation of its plans, which will allow to effectively counteract the Kremlin’s policies. And, even more so, — to create favorable conditions for the countries of the former USSR to achieve their own state and national development goals.

Russia’s aggression against Ukraine in various forms of “hybrid warfare” is now widely known. This issue remains subject to increasing attention of both, Ukrainian and foreign experts, and has already been reflected in applied and theoretical studies.

At the same time, Ukraine is just one of Russia’s expansion directions. As noted above, Moscow is also trying to return to the sphere of its exclusive influence other post-Soviet countries, Belarus included.

Despite the different approaches of Ukraine and Belarus to choosing their foreign policies, Moscow’s policy poses common threats to both our countries. This is precisely what determines the expediency of defining the features of Russia’s “hybrid war” against Belarus, which will allow us to share relevant experience and combine efforts in defense of our interests.

Especially, when Minsk is quite obviously moving to a more independent from Russia policy. In particular, the Minsk meeting of President of Belarus A. Lukashenko and US Secretary of State M. Pompeo on February 1, 2020 testified to this.

Given these circumstances, in my speech, I will express our vision of the main directions of Russia’s actions against Belarus, and will also focus on those aspects that contribute to or hinder Moscow’s achievement of its goals. Based on this, I will propose some approaches to establishing cooperation between Ukraine and Belarus in deterring Russia.

Once again, I will emphasize the importance of this task in the context of the topic of our meeting. For example, Russia’s achievement of its goals for Belarus would, in fact, deprive the latter of its statehood. In turn, this would have critically negative consequences for Ukraine, which would find itself surrounded by Russia in the east, in the south and in the north.

So, let’s start with a more detailed analysis of the issues raised. 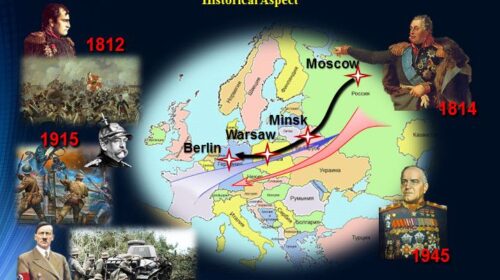 Like Ukraine, Belarus holds a special place in Moscow’s geopolitical plans, due to its fundamental importance for the Russian Federation.

3. Belarus Between Russia and Europe. The Present 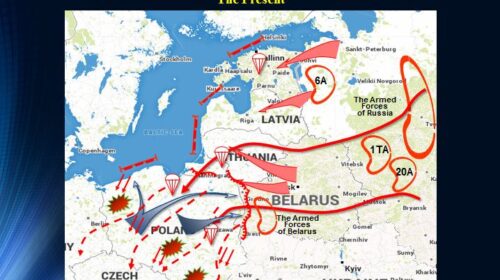 During the Cold War, this direction became the main axis of confrontation between the USSR and NATO. And now it is the same axis of confrontation between Russia and the North Atlantic Alliance that is now on the borders of Belarus and the Russian Federation. At this, both the parties carry out a symmetrical build up of their armed forces, as well as conduct military exercises with opposite aims.

Thus, within the framework of the “West” joint strategic command and post exercises of the armed forces of the Russian Federation and Belarus, they rehearse an offensive to capture the Baltic states and part of the territory of Poland. In turn, the USA and NATO have resumed the conduct of a series of exercises characteristic of the Cold War, during which they rehearse repulsing of Russia’s armed aggression. 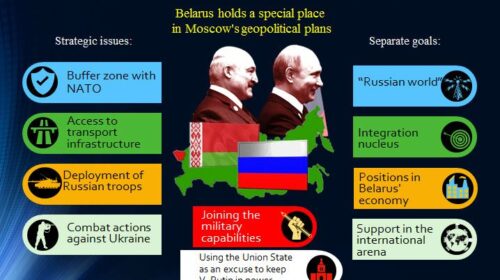 Under such conditions, establishing control over Belarus would allow Moscow to resolve a number of strategic issues, including:

Besides, Russia’s goals for Belarus include:

5. Peculiarities of the Situation in Belarus Used by Russia for Actions Against It 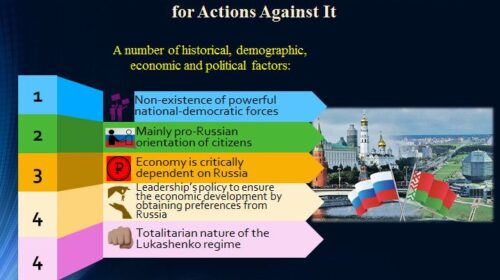 To achieve its goals on the Belarusian direction, Russia uses the full range of methods of “hybrid wars”, which are also conducted against other countries of the former USSR. However, the strategy and tactics of Moscow’s actions on the Belarusian direction have certain peculiarities due to a number of historical, demographic, economic and political factors characteristic of Belarus.

Such factors are both, objective and subjective and may be perceived differently within Belarus and outside it. We consider the following factors to be the main ones:

All these circumstances are used by Russia in the realization of its interests in Belarus, and determine the forms and methods of such actions.

6. Forms and Methods of Russia’s “Hybrid War” Against Belarus 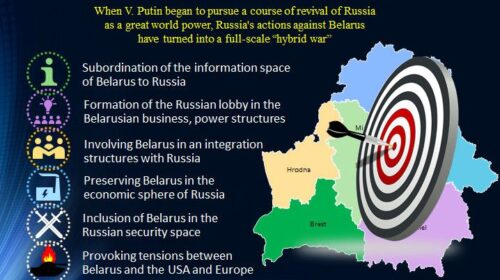 Russia’s purposeful steps to realize its interests in Belarus began immediately after the collapse of the Soviet Union. However, at the initial stage, they were of a rather limited nature and mainly concerned the preservation of Russian influence on Belarus, as well as obstacles to its national democratic and European development.

With coming to power of V. Putin, who began to pursue an active course of revival of Russia as a great world power, Moscow’s policy on the Belarusian direction has acquired a new character. Thus, its main content has become to restore Russia’s full control of Belarus and to effectively reduce it to the level of the Russian province while maintaining formal attributes of statehood. In fact, since then, Russia’s actions against Belarus have turned into a full-scale “hybrid war”.

The main directions of such actions are:

To achieve these goals, Russia takes a set of measures, including both, giving all sorts of preferences and putting pressure on the country in political, economic and information spheres.

7. Methods of Russia’s Achieving Its Goals for Belarus 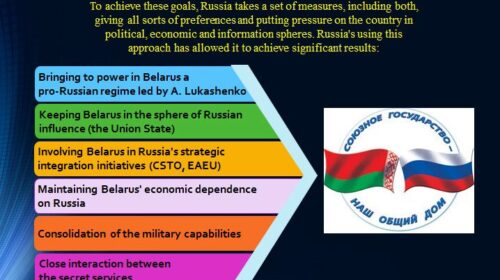 Russia’s using this approach has allowed it to achieve significant results. First of all, such as:

8. Results of Russia’s Achieving Its Goals for Belarus 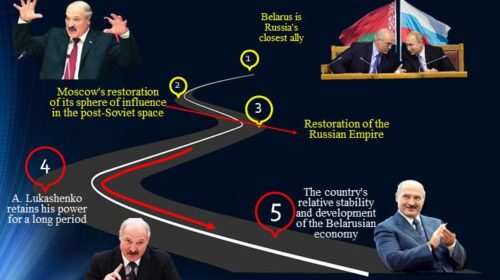 In turn, allied relations with Russia and its support allowed A. Lukashenko to retain his power for a long period, as well as to ensure the country’s relative stability and development of the Belarusian economy.

9. Problems in Relations Between Russia and Belarus 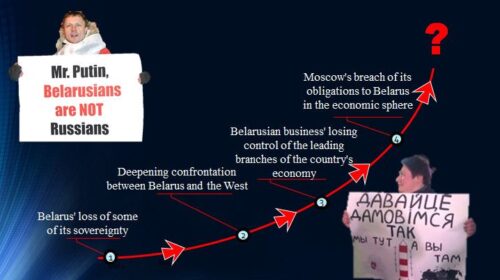 Despite the preferences got by Belarus and A. Lukashenko personally from his alliance with Russia, the country also faced a number of significant problems. The most negative are as follows:

All these problems have been rising along with Russia’s growing expansion towards Belarus.

Since 2014, they have reached a whole new level, which has resulted from the Western sanctions’ negative impact on the Russian economy, and therefore on the economies of Russia’s partner countries. Besides, the interests of Belarus were directly affected by Moscow’s counter-sanctions against Western countries.

10. The Spread of Negative Perception of Russia 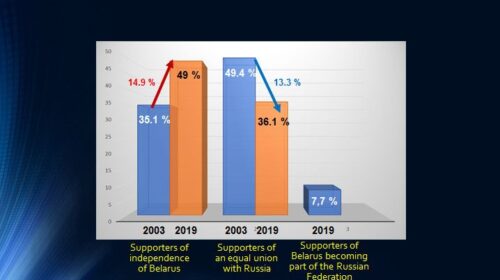 We should also point out the gradual spread of negative perception of Russia in the Belarusian society, as well as the increase in the number of supporters of independent development of Belarus.

11. Actions of the Leadership of Belarus to Counteract Russian Expansion 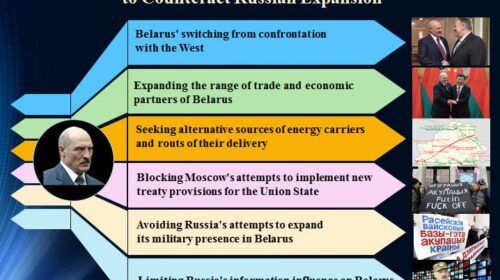 In the face of increasing pressure from Russia, the Belarusian leadership has stepped up measures to curb Russian expansion. At this, in the conditions of considerable superiority of Russia’s potential and capabilities, an asymmetric approach was applied, focusing on the most sensitive aspects for both countries. The main directions of such efforts were:

Here, the most illustrating was the visit to Belarus (February 1, 2020) of US Secretary of State M. Pompeo, which testified to the “defrosting” of the relations between the two countries. To begin with, US representatives of this level had not visited Belarus for 25 years, and since 2008 diplomatic relations between the two countries had been reduced to the level of charges d’affaires.

As a result of the talks between A. Lukashenko and M. Pompeo, an agreement was reached to intensify cooperation between the two countries. At this, A. Lukashenko welcomed the strengthening of the USA’s role in Belarus and emphasized that Belarus would never become part of Russia. In his turn, M. Pompeo expressed the United States’ willingness to fully meet the Belarusian oil needs;

The above actions of the leadership of Belarus largely rely on the totalitarian system of the Belarusian authorities, which allows to block Moscow’s attempts to undermine the internal situation in the country. At the same time, the national consciousness of the population of the country is taken into account.

This is evidenced by the Belarusian authorities’ fairly loyal attitude to the anti-Russian protests in Belarus, which took place last December over the plans to sign a new “road map” for deepening integration within the framework of the Union State of Belarus and Russia.

In response, Russia uses pressure on Belarus to keep it in line with its policies. At this, the main tool of such pressure is, as a rule, manipulation of Russian oil supplies to Belarus.

All this leads to periodic exacerbation of relations between Russia and Belarus, as it happened at the beginning of this year.

12. Complication of Relations Between Russia and Belarus 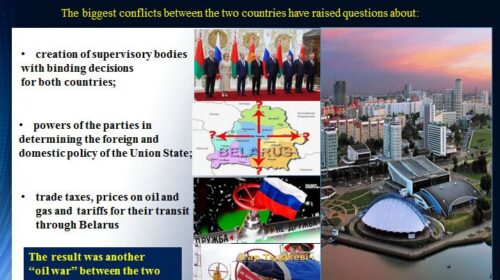 Problems in the relations between Russia and Belarus were observed in the preparation of a new package of documents on deepening the integration of the countries within the framework of the Union State. The biggest conflicts between the two countries have raised questions about:

Fundamental differences between the parties regarding the above-mentioned problems were confirmed during the meeting of the Presidents of Russia and Belarus on December 20, 2019 in St. Petersburg. The result was another “oil war” between the two countries in January 2020.

On the whole, the issues considered allow us to draw a number of conclusions concerning both, Belarus and Ukraine:

First, Belarus, like Ukraine, is at the forefront of Russia’s post-Soviet expansion due to its strategic importance for Russia. Against this background, Moscow will continue to take consistent steps to establish full control over Belarus, including through the use of forms and methods of “hybrid warfare”.

Second, unlike Ukraine, Belarus does not yet have sufficient capacity to deter Russia. Due to this, Moscow has already largely achieved its goals on the Belarusian direction. However, gradual understanding by the leadership and society of Belarus of the danger of losing the statehood leads to increased resistance to the Kremlin’s actions.

Third, existence of common threats from Russia to Belarus and Ukraine creates the basis for a concerted effort to counteract Russian expansion. 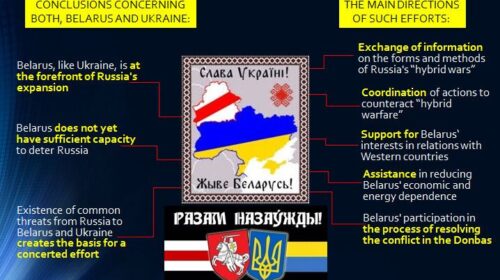 The main directions of such efforts may be:

In fact, we have already started such work today;

The basis for the implementation of such an idea was created by the meeting of Presidents of Ukraine V. Zelenskyi and Belarus A. Lukashenko in October 2019 in Zhytomyr, during which they confirmed the brotherly nature of relations between the two countries;

The management of the Belarusian Oil Company is considering plans to import oil through the ports of the Baltic states and Ukraine on an ongoing basis. In the autumn of 2016, during the period of another aggravation of Russian-Belarusian relations, a temporary scheme of oil supply to Mozyr refinery from Azerbaijan by tankers to the Odesa seaport and further by rail through the territory of Ukraine was organized.

Minsk’s willingness to do so was confirmed by Foreign Minister of Belarus V. Makei during the joint press conference with US Secretary of State M. Pompeo on 1 February, 2020 in Minsk. According to him, Belarus will do everything possible to help resolve the Donbas problem, including with the participation of the United States.

This approach will allow Ukraine and Belarus to strengthen their positions in restraining Russia, which will be important both, for their own interests and for the security of the whole of Europe.

To watch the full speech (in Ukrainian):