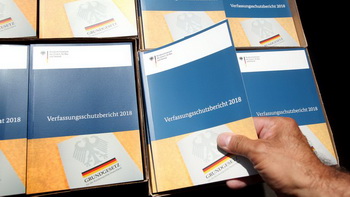 The institution responsible for internal security and timely and effective counteraction to threats in Germany is the Federal Office for the Protection of the Constitutions (BfV). This is one of the secret services that performs counter-intelligence tasks and collects information about spyware that is being conducted on the territory of the Federal Republic of Germany in favor of other countries.

June 27, 2019, Federal Minister of the Interior of Germany, Horst Seehofer and President of the BfV Thomas Haldenwang, issued a BfV document entitled “The 2018 Report on the Protection of the Constitution”. Traditionally, the document in detail covers the current situation in the world and around Germany, identifies existing or potential threats to Germany, points to trends in the development of the political situation in the world. At this, it determines the tasks and criticality of intelligence support of security of the state.

The BfV report for the first time mentions four countries that, according to the agency, constitute the greatest threat to the constitutional order of Germany: Russia, China, Iran and Turkey. Since Russia and China are on the list of the world’s geopolitical powers, the justification of the threats posed by them to Germany can be interesting for Ukraine as well.

The aforementioned report of the Federal Office for the Protection of the Constitution of Germany thoroughly analyzed the activities and outlined the prospect of counter-intelligence support of state stability, identified the existing and possible threats, pointing to those countries from which there is a serious threat. The document is informative and, by its methodology, is interesting for a wide range of professionals who responsible for national security and study the activities of various special services.